We had a very lazy morning. Phil & Katie had a swim and I did the laundry. We eventually got underway about 1pm. We drove to Epcot and parked quite close for 1pm. I really wanted to do Ellen’s Energy adventure, but I didn’t think Katie would like the dinosaurs, and she was fast asleep in her buggy, so we swapped. (Not a proper baby swap, because this is a 45 minute show –too long to be hanging around at the exit.). Phil took Katie over to the Rose and Crown to request a patio table, while I did the ride. I quite enjoyed this ride, but I thought the Energy message was quite amusing. Basically it seemed to say ‘We are running out of coal, oil and gas, but don’t worry because Exxon will find some more’ no suggestion’s that energy should be saved or conserved at all.
After the ride, I swapped with Phil, and Katie and I went to Innovations. It was nice and quiet, so we got to play with lot’s of things, and sent a digital postcard to my mum, and had a free photo taken by Xerox. On the boards, I once heard a complaint about Epcot, that there was nowhere that you could take a buggy inside, so if your baby was asleep you couldn’t get out of the heat and into some a/c. Well, we were able to take the buggy into Innovations without any trouble, so it’s worth remembering if you travel with small children. I did notice kids being turfed out of stroller’s at the entrance to ‘The Land’ pavilion, and ‘The Living Sea’s’ this would make it nearly impossible to visit with a non-walking baby/toddler, unless you had a really good sling. I certainly wouldn’t fancy carrying a one-year old around for an hour.

We met back up with Phil, and by this time it was nearly 3pm so we headed to the Garden Grill for the Ice Cream Social. I had heard mixed reports about this event, but we had nice big ice-creams (we’d had no lunch either), and we saw Chip, Dale, Pluto and Mickey, and had a lovely view of The Land ride too. I thought it was excellent. About 20 minutes into the meal, Phil realised we were revolving! 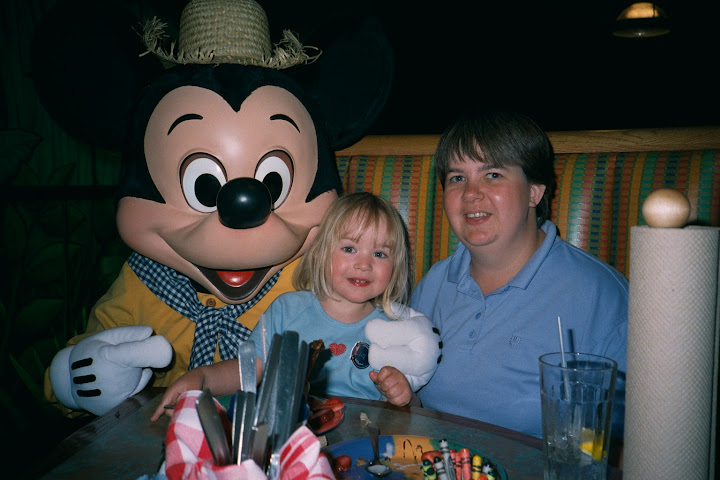 After this, we went to Imagination. I wasn’t at all sure about Katie doing this, but we asked the CM and she told us about the train in the dark, and the bright flash at the end, and Katie decided to try it. She did great – I was very startled by the bright flash at the end, but Katie was unfazed. I was really surprised, as earlier in the week she would have hated this, but she coped really well. The playground after is not as good as I remember from many years ago, and seemed to be basically a Kodak shop. This was disappointing, as it had been my favourite pavilion, and I missed Figment.
‘Bring Back Figment’
After Imagination, we did the Living Seas. I liked the ride, but the travelator thing was a bit pointless. Also, Katie was being a bit wild and running around like an out-of-control thing so it was hard to enjoy the tranquillity of under the seas. We did see a Scuba diver feeding the fish which was cool.
The next thing on our plan was the parade, but it was still early, so we sat in the shande and had a drink and a snack. Then we headed round to France and found a hidden mickey in the garden (thanks to the passporter). We found ourselves a great viewing spot and sat to wait for the parade. However, the parade wasn’t going through France (the parade route in the Passporter was different from the official map – so it makes sense to check the official map). Just before the parade started, we realised our mistake and scurried into Morrocco. Of course by this time, all comfy benches had been taken, so we had to stand. 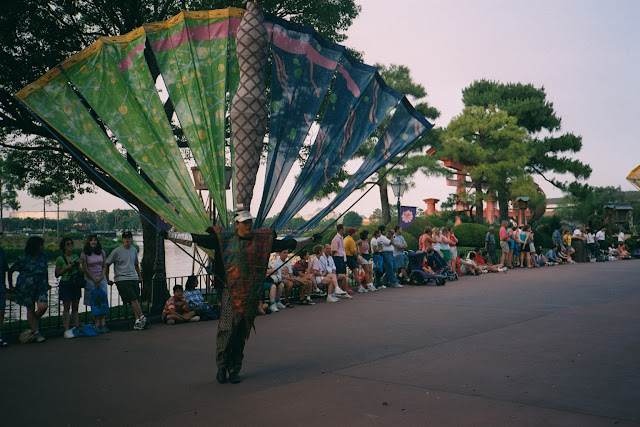 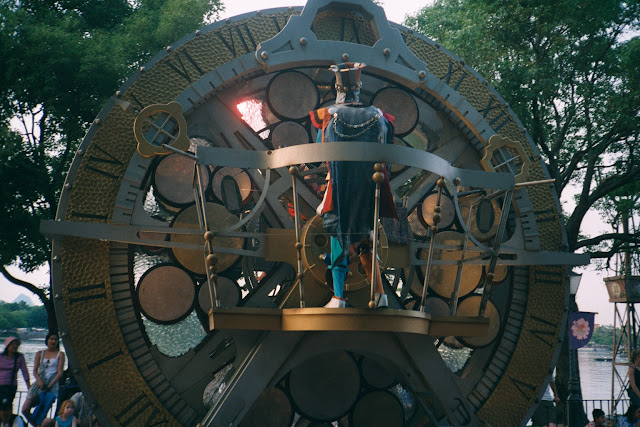 The parade was excellent, although I think perhaps the later showing may be more impressive with the lighting etc. The puppets were just amazing and many reached down to shake hands with Katie, who as usual was dancing in the aisles. She sang that ‘We be la’ song for the rest of the evening as well. 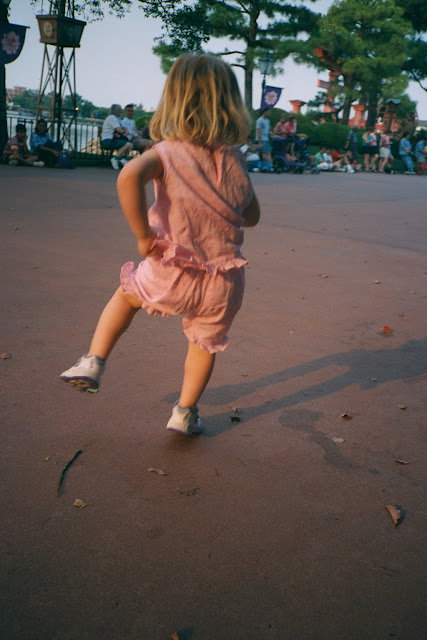 After the parade, we wandered back to the UK, and as we had some time before our PS, we sat and enjoyed an excellent Beatles tribute band. We picked up a pager for the Rose and Crown, and again mentioned that all important outside table. While we were waiting, I went in to a shop full of breakable china. The CM noticed that I was worried about Katie breaking something, so she started talking to her, so that I could browse. She picked up Katie’s Minnie Mouse, wandered off with her, and when Minnie came back she was carrying a packet of Cadbury’s Button’s – only Katie’s absolute favorites! I really couldn’t believe it. We chatted to the CM for a while, and I pointed out her Muppets 3-D pin to Phil, as we had enjoyed the Muppet’s show. But I had nothing I wanted to trade with her (we only had the 3 original pins). Next thing I knew, she was taking it off her lanyard and giving it to me. I was amazed. Things like that don’t happen anywhere else.
Just as we were saying goodbye, she said ‘Hope you enjoy your meal at the Rose & Crown’ I thought she must be psychic, but no – I was carrying a pager! Which started to vibrate…
We returned to the Rose and Crown, and got the best seats in the house – without a doubt. On the lake side, lower patio, right in the middle – they couldn’t have been any better – Fantastic!
We had a really lovely meal. Salad, Fish & Chips, Bangers & Mash, Cottage Pie for Katie (best meal she had all fortnight). Trifle for Phil, The Crown Jewels for Katie, and I had the Guiness Mousse in the Spaceship Earth – it was to die for. 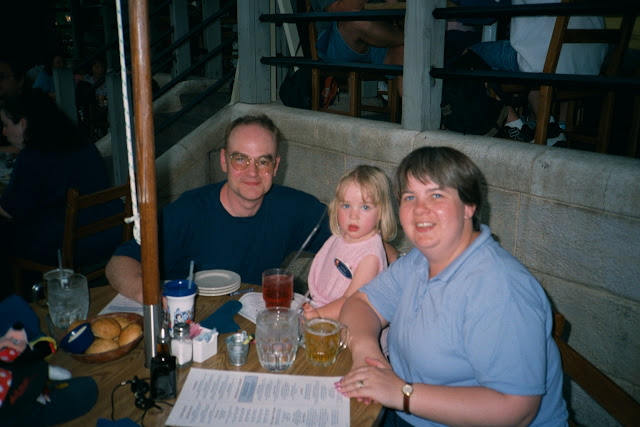 Just after they brought out the desserts, the fireworks started. (They were started by a young boy at the Rose and Crown.) and it was as if they were putting on the show just for us. The view was worth the $66 we spent for dinner right there. 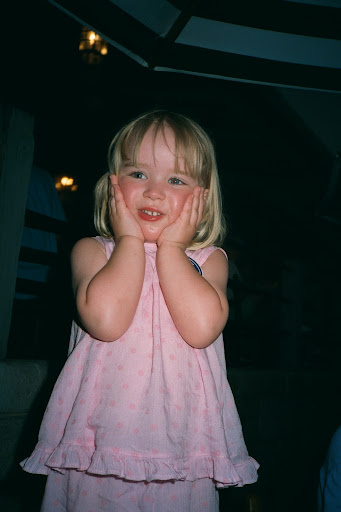 It was an fantastic, incredible show, and I can’t begin to compete with SpottyDog’s description, but let’s just say it was awe-inspiring, and an amazing way to end our last night at DisneyWorld. And all the credit for that goes to The Dis – I would never have had any idea to make a PS, let alone for a certain time at a certain restaurant to get the best seats in the house.

As we eventually left the park, it was late and very empty, and we found some pavements with lights in them. They made pretty patterns on the floor and Katie enjoyed playing in them. Chef Mickey’s was great, although we had a long wait to see the characters – I think we could have better spent the time in Magic Kingdom. (We waited about 15 minutes after we finished eating to see Mickey). 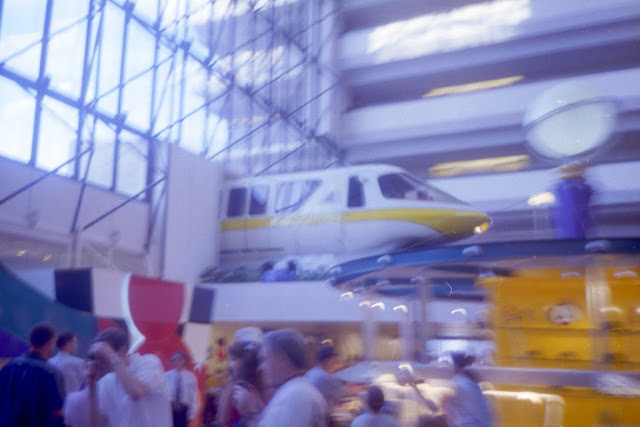 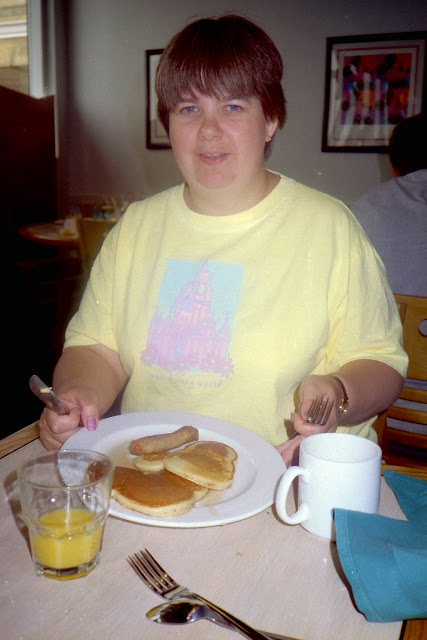 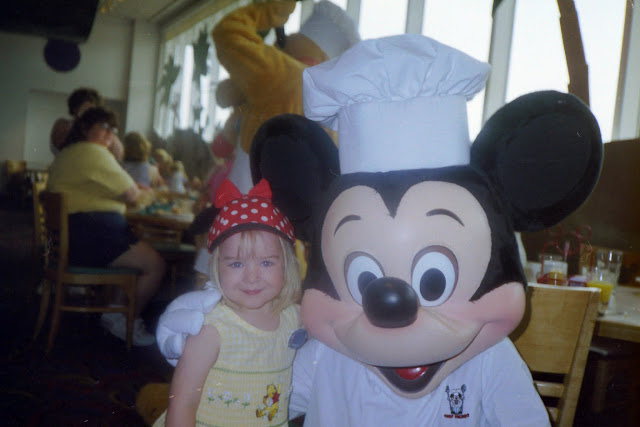 After breakfast, we took the monorail to MK, this was pretty cool, and only our 2nd trip on the monorail. We went to Toon Town as we only had an hour and this was the only part of the park we had missed so far. We looked in Minnie and Mickey’s house, which are both very cute. In Minnie’s house, you can look in her fridge and run the microwave. 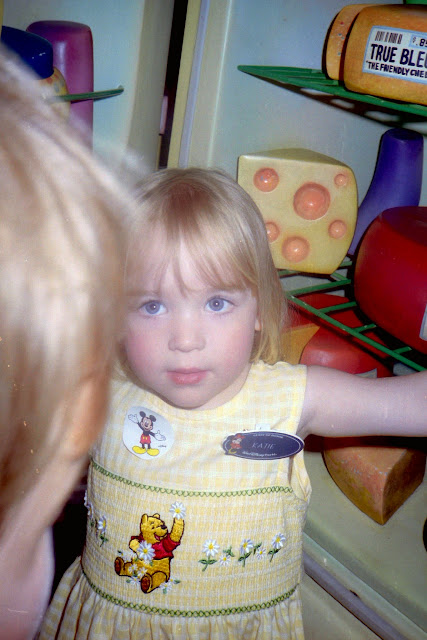 Then we popped into the Judge’s tent, and saw that Cinderalla was there. We hadn’t managed to see Cinders all week, so we joined a short looking queue. We waited a while, and didn’t seem to be moving at all, there was no indication of how long the queue was (I am always conscious that just around the next bend maybe 100 more people), so eventually we decided that we would have to meet Cinderella next year.
We bought a couple of souvenier’s in the Judge’s tent, and headed back to the Contemporary to get the car.
It was 12.30 when we got in the car, and we had to check out by 1pm. No problem, we were all packed, just needed to change and throw the bags in the car. Except… We got totally lost leaving the Contemporary – I think we should have gone through the ttc, but we didn’t and eventually ended up taking a tour past Fort Wilderness, Port Orleans, Downtown Disney and a few u-turn’s later we found our way back to CBR at 12.58pm. We threw the bags in the car, no time to change, and left by about 1.30 – it was a very sad moment.
We had a 5.50pm flight, so needed to be at Sanford by 4, so loads of time. We decided to stop at McDonalds for lunch, and I popped into Goodings to get a few supplies for the plane (bribes for Katie) and suddenly we were running very late. We were driving up the freeway and I was checking my watch and panicking that we wouldn’t get there in time, but we actually got to Sanford for 3.30, and it took all of 30 seconds to empty the car and return it (perhaps we should have taken a little longer over this task…)
We checked in very quickly (no queue at all), and headed into security. I still had a cooler bag from the park in the stroller, so I lifted that on to the conveyor belt, and as it was travelling through it tipped over and dumped water all over the conveyor belt! Oops
Upstairs, we all changed into travelling clothes and sorted ourselves out. I decided to hit the duty free and asked Phil for my wallet out of his bum bag. He denied all knowledge of the wallet and I didn’t have it, so a minor panic started to set in. We took all the carry on bags apart and revisited the bathroom where we had changed. It was definitely not with us. I went back to security to see if I had lost it during the water incident, but they didn’t have it. The security guard there was amazingly confident that it would turn up. Things don’t get stolen here, he told me, it will turn up. Eventually, I rang Dollar and they found it under the seat in the car. Seems I had handed it to Phil to put in the bum bag, he hadn’t realised, and it had just fallen on to the floor when he got out of the car. I got it back completely intact, although I felt slightly foolish.
The flight back was long and tedious, although this time Katie’s car seat was allowed on board. No problem at all – I do wish they would be consistent. Only complaint about the return flight was that the lights were kept on way too long, so that they could sell stuff, and the kids (Katie especially) were having trouble falling asleep.
Well, that’s the end of our story, except… the holiday brochure for next year was on the mat when we returned, and Pop Century looks pretty good.