Sleep Late – (Do you sense a pattern here?.  We just make it to MGM Studios in time for our breakfast at Hollywood and Vine. (10am).  Before we eat I try and book the Fantasmic Dinner Package, but I can only get a table at 3pm at either H&V or Brown Derby.  We are just on our way to H&V and a posh dinner in the Brown Derby at 3pm doesn’t really appeal, so we decide to chance it.

Anyway,  back to breakfast.  The food is ok ,  nothing wrong with it,  but not particularly exciting – but hey it’s free,  so I’m quite happy.  The characters were great fun,  we saw Chip and Dale,  Minnie and Goofy.  In the middle of breakfast Minnie and Goofy start to do a dance.  Minnie got up and gestured to all the kids to come up, and I thought they wanted the kids to go on the dance floor and dance with them, like they do at the parades,  so I sent Katie off to dance.  Turns out they were just supposed to stand and watch. Anyway,  a CM ushers Katie off the dance floor but miles away from me- So, Katie promptly bursts into tears. ‘I want my mummy’, so the CM has to bring her back through the middle of the dancing back to mum.  I felt like a bit of an idiot because I had told her to go dance.  Oops – aside from that minor mishap we had a really fun meal – I loved the costumes that Minnie and gang were wearing.

After breakfast we head over to Playhouse Disney – this is a big hit with Katie, all her favorites, Bear, Rolie Polie Olie, and Pooh, as well as one guy we don’t know,  Stanley.  Katie really enjoys this show and afterwards she chooses a Zoe Beanie – the first beanie of the trip,  so we are doing well.  After Bear we decide to take in the animation tour- we have quite a long wait as the line is stopped just in front of us – but once in it’s an interesting tour, although most of the animators seemed to be on their lunch breaks.  We saw lots of clips from Lilo and Stitch which looks like it will be a fun film.

After the tour we are getting hungry again,  so we try the Sci Fi Café – we have no PS and are told we can eat at a picnic table now, or wait 2 hours for a car,  so we opt for the picnic table.  The café is great fun,  even at a picnic table.  I love the sky,  it is really effective, and you feel you are outside.  The film clips are really funny too,  although Katie was a little taken aback to start with, as they are off the Giant Killer Tomato eats Small town variety – but since they are so absurd she soon realised they had to be pretend.  We had 2 burgers and fries and 1 kids dessert and it was $40 including a glow in the dark Frisbee.

After lunch we walked through the New York Streets.  I love this area and I wish we had spent more time there – it looks like there are lots of little secrets hidden down these streets.  I particularly love how a NY Street and a London street meet at an intersection, and yet it somehow looks right.  We stumbled upon the backlot tour and decided to have a go – I wasn’t sure if Katie would like this, but she was fine.  I really like all the houses in the backlot area,  and can imagine that this is pretty cool during the Osbourne lights.  Katie liked the Catastrophe Canyon,  so just shows you can never tell with Katie.
The backlot tour emptied out into a Gift Shop (now there’s a surprise), and we spotted Goofy sitting in his Props room.  Also in the area was face painting,  so Katie decided to have her face painted – she looked really sweet with a rose on her forehead.

After face painting, we raced over to catch the Beauty and the Beast show – this was superb,  I love how you get to see a Broadway show in a theme park – very impressive.
We decided it was time to find a spot for the parade,  we needed to be near the exit as right after the parade we were heading to the Yacht and Beach club to take Katie to the crèche.  We scouted around and found the perfect spot.  Right at the entrance to MGM there is an info booth,  we stood in front of the booth facing towards the big blue hat,  and had a perfect unobstructed view off the parade heading towards us.  This is a great spot, as noone seems to realise they  can stand there until the last minute, so both curbs were packed with people and our spot was still empty.  The CM in the booth pointed out that there is a brass line built into the ground at MGM,  so they don’t need to mark it out with masking tape – you just have to stay behind the brass line and you are ok.  Anyway,  perfect view sorted,  we watch the parade – well,  actually I took photo’s of it – I got a little snap happy and took 30+ photos of the parade.  It was just such a great view, and it seemed a shame to miss any of the cars or stars and they were all superb,  so I just clicked away.
Immediately after the parade, we were able to make a quick exit and we drove around to the Beach Club.  Katie was booked into the Sandcastle club for the evening.

Katie reports:  Well,  I asked Mum and Dad what I should have to eat, then I went to play.  I played in the home area, with the teddy bears.  There was a McDonalds there too, so it was really a street area.
I had chips and fish nuggets and chocolate milk for my tea.  After dinner I played in the street area, then I made a necklace at night time.  We read a storybook,  that’s everything that I did – I also made a cookie.

Mum and Dad report:  We left Katie and danced off, excited to be free for a few hours.  We took the boat to MGM and decided to do the Great Movie Ride, since Katie would not enjoy this.  This ride has the worlds longest and slowest line – we eventually saw the ride, I’ve heard there’s 2 versions,  but I had the gangster for the 2nd time.  After the ride,  we ran towards Fantasmic,  we stopped to get some food to take in to the show, and we heard the CM’s at Fantasmic shouting Hurry Up, the rope is closing.  We were the last people into the show, at 8.15pm.  It was standing room only, so we found a spot and worried that we couldn’t really see.  As we waited we got chatting to a Mum with 2 boys. The boys were both upset that they couldn’t see anything.  When the show started, the mum tried to lift both boys up,  after a while she had to put one down as they were too heavy.  He started to cry,  so Phil picked him up to watch the rest of the show.  About the same time, it started to rain..
As for the show,  well, I enjoyed it, but it wasn’t the awesome, amazing show I had been expected,  but that could have been a combination of the poor view, terrible weather and high expections I had.
After the show we headed out of the park, drenched and debating whether we should walk back to the Yacht and Beach, or get the boat.  My feet hurt so the boat won.  We had to wait a while for a boat, but it came and took us back to the Y&amp;B in style.  We went back to pick up Katie,  she was just settling down to watch a video and seemed quite happy.  Bill for child free evening- $30.

Shopping List: Stickers for Christine, Template for Natalie, Album for Me.
Purchased,  none of the above.

We started with a late breakfast at Ponderosa,  so late that Katie had lunch,  Spag Bol.  I had the last pancakes and French toast on offer.  In fact,  if you want an early lunch, then 5 to 11 is a good time to arrive – we paid for breakfast, but all the lunch items were on the buffet and we could have had a full lunch instead.

After breakfast we headed up the I4 to Michaels – not much I fancied in Michaels but still managed to spend $70.  Phil and Katie went to the book store next door while I shopped and seemed quite happy.
Then it was up I4 to the Altamonte Mall.  We had some photo’s developed, and had some portraits taken off Katie.  For some reason, her school never did school pictures this year,  so I have been wanting to have a photo taken off her.  We saw this place in the mall, Picture People, that did professional portraits in an hour,  so we decided to have some taken.  First we had to go to the Gap and buy a new dress,  and to Claires for a hairbrush,  but once she was presentable we headed into the studio.  The photographer was excellent because Katie is very stiff when she sees the camera.  As soon as he started to take her picture,  she froze and gave a formal grin.  He was able to distract her by tickling her dad, and took some really lovely shots.  I was really pleased with the way they turned out. 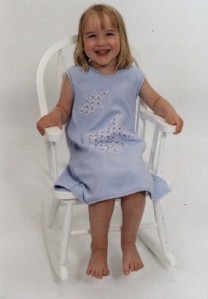 Portraits taken, we split up, I went clothes and scrapbook shopping,  and Phil and Katie went to the food court.  I spent a happy hour in Lane Bryant buying lots of new trousers that actually fit, and then I found The Scrapbook Shak.  I spent another happy hour in the Scrapbook Shak when I realised I hadn’t seen Phil or Katie for a while,  so I went off to look for them.  No sign of them anywhere,  so I start to comb the mall.  I was starting to get a bit worried because it had been ages and I thought Phil would be furious,  but then I spotted them downstairs- of course I was upstairs,  so it was either shout like a lunatic,  or try and run down the escalator before they disappeared, I shouted.  Anyway,  I caught up with them,  and we went to collect the portraits and head home.  Our route home took us past the VERY elusive scrapbook HQ – even with new directions it was still hard to find,  but we did eventually find it,  and still no blue album for Dad,  stickers for Christine or template for Natalie –  I don’t think I bought anything at all,  which seems a shame since it took us 2 tries to find it!

We got home about 8pm and had a coffee and some sticky cinnamon buns for tea.