The plan today is Epcot and Ohana’s for tea.  We sleep late and chill out in the morning, which is becoming a nice routine.  About noon we head to WDW, halfway there the rain starts and we drive through the most incredible rain storm – it was really quite scary and you could hardly see anything,  but there wasn’t really a safe place to stop so we kept going very slowly and by the time we reached the Epcot car park it had slowed to a gentle torrent.  We donned our very classy blue Walmart poncho’s (think bin bag, or dry cleaning bag and you have the general idea) and we walked to the gate,  by the time we had entered the park we were drenched.  We figured the lines would be short, so lets just do it – so after investing in a couple of Mickey umbrella’s we head off.  We started with Innovations to avoid the rain,  but eventually decided not to worry about the rain and just get on with it, so we left the safety of Innovations and headed for World Showcase.  Somewhere between Future World and the UK the sun came out and by the time we had watched the show in England we were pretty dry (except for my feet,  I made the mistake of wearing trainers and they never really dried out all day).  The show was a very amusing rendition of the Holy Grail performed in the streets of Merry Ole England, and we all thoroughly enjoyed it.  We then came up with a cunning plan to eat our way around the world, and decided to start with 1 portion of fish and chips between the 3 of us.  We sat down by the lake, enjoying the sunshine and the fish and chips, and apart from soggy feet it was very pleasant.  We were both quite dry,  but since Katie has been sitting in a wet stroller she was absolutely soaked.  We quickly changed her in the privacy of dad’s poncho and she was much more comfy but the stroller was soaked and very slow to dry, so she had to walk for most of the day.

We headed off for France, with a quick detour to the International Gateway where I tried in vain to buy some dry shoes – I had seen some lovely mickey trainers the previous day and decided not to buy them, so now that I had wet feet and the perfect excuse I couldn’t find them anywhere.  We also took a picture of Katie with Lilac Bear,  which was today’s project.  Katie’ s nursery had sent a small bear on holiday with her and we were supposed to take photo’s of it all over florida, but of course we forgot to take it out with us most days,  so today we were hoping to take a picture of Katie and the bear in all the countries.
In france, we further our eat our way around the world goal with 3 pastries and a coffee, and sat inside enjoying our pastries while Katie made a mask.  I went off for a walk through the shops and spotted Beauty and the Beast doing autographs, but Katie was more interested in her mask, and a little nervous of the Beast, so we didn’t take any photo’s with them. 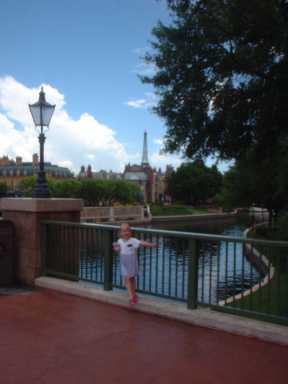 After France it was onto Morocco, where we had a good browse around the bazaar (I was still looking for those elusive dry shoes) and Katie did more work on her mask.  We walked quite quickly through Italy and into the USA where Katie did more colouring and I decided to remove my dripping wet socks and just wear trainers and bare feet.  No sooner had I got my trainers back on when I felt a spot of rain on my arm.  A guy shouted out ‘It’s raining’ like it was an air raid and everyone dived for cover.  Within a few minutes it was chucking it down again – it certainly knows how to rain around here.  We sheltered near an outdoor theatre, and since we really had hardly any shelter at all, we decided to head off in the rain.  We walked past the Outpost,  where quite bizarrely a ‘cooling station’ was spraying a cool mist into the air, to cool people off – seemed a little unnecessary at the time! 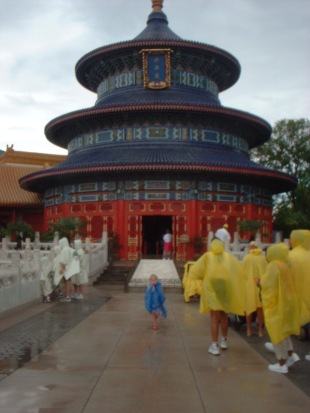 Next up was China, where we went into the temple so Katie could work on her mask.  It was quite busy at the kidcot station here, I guess because everyone was hiding from the rain. When we came out of the temple the rain had stopped,  so we dried off and headed to Norway and more food for our mission.  We were having a bun and coffee here and I chose this lovely looking bun filled with cream, or so I thought.  It was quite a strange concoction with whipped butter inside, and icing and coconut on the top – and not really our favorite thing at all.  Katie went off to play in the Viking boat while Phil and I evesdropped on a neighbouring table, where a number of cheerleading moms were discussing the politics of cheerleading – it sounded like a scary business.
We didn’t do Maelstrom this year, even though Katie managed it last year,  because she was not keen on going near those trolls again.
By now we were nearly all the way around,  so we went into Mexico and had a ride on El Rio del Tiempo, one of Katie’s favorite rides,  and she did some more work on her mask.

After Mexico we went shopping at MouseGear.  As Katie had walked all the way around World Showcase without complaining, I offered to buy her a present.  She took this to mean a new princess dress at $55, which it did not, so after a little negotiation we settled on some princess Mouse ears which were extremely cute, and under $20.  We squelched our way back to the car,  stopping in on Spaceship Earth as we passed, and I was very excited when I found an abandoned pair of dry sandals in the boot of the car.

We were off to the Poly for dinner,  and I would have quite liked a shower and some dry clothes, but we didn’t really have time, so we headed straight to the Poly and arrived quite early for our PS.  We wandered around the hotel, which looked lovely – I think I could stay here, it feels nice and welcoming, not at all stuffy like some of the other deluxes that we have visited.

We decided to indulge ourselves in a Mai-Tai in the lounge while we waited for our PS, and then we headed into Ohana’s.  This was a fun place – we were seated right by the fire pit and had a great view of all that was going on.  The starters were delicious, I could have just eaten these all night.  The skewers were very good too, I think the shrimp were my favorite although we enjoyed them all.
While we were eating they did some games,  Katie opted not to join in with the coconut race when it was announced and then wished she had, but fortunately they had another race just as we were eating dessert so she got to have a go after all.  She also jumped up to have a go at the hula hoops- well,  she had a hoop, and she had a go, but she was hopeless,  we were both in stitches as she span round and round trying to make it do something; but each time it just fell to the floor.
All in all we had a very good evening,  and this is somewhere I would definitely return too.

Started with a quest to find some scrapbook albums.  We found yet another store and had some success!  I got the albums I was after,  Phil and Katie checked out a cool McDonalds while I shopped, which had a kids play area, so Katie was happy.  After the scrapbook shopping, we went to Belz – I fancied some Bass shoes,  but they didn’t seem to have anything in my size in the store, so other than some Osh Kosh clothes for Katie and a go on the carousel we left pretty much empty handed.
Having heard much about Sweet Tom-ay-toes, we stopped their for lunch – unfortunately they had no water and so were closed for the day.  Instead, we decided to return to Pointe Orlando and have burgers at Johnny Rockets and play some tunes on the juke box.

After lunch, we took Katie into F.A.O Schwartz, and amazingly left without buying her anything – I quite fancied getting her some Lincoln Logs,  but I was starting to wonder how I was going to get all my shopping back in the suitcase, so I’m afraid the Lincoln Logs stayed on the shelf.  Shame really, because I think she would have played with them a lot.
After all this shopping, it was back to the villa and Katie wanted a swim.  Phil and Katie swam, while I tried to fit all of the shopping back into the cases.  It didn’t take long to realise that it wasn’t all going to fit.  All week I had been putting shopping into the bedroom cupboard, and buy this point is was pretty full.  A cupboard full of shopping was not going to go back into the 1 empty suitcase I had brought with me.

We has quite a low-key evening,  Phil and Katie went out to get a takeaway,  and we packed up ready to move to Animal Kingdom Lodge in the morning.