4 years ago, the first ever Northern Meet was held at South Shields beach. I went along with some trepidation, and Phil thought we were downright barmy to go meet ‘people off the internet’ – well, we we could’t have been more wrong. We all got on really well, and some of us have met up twice a year ever since. Last year, quite a few of us were in Orlando for the same 3 days, and we went to MGM and Epcot together. On our last day, sat by the pool with DaveFM and Bev, we all said, this was fun, let’s do it again next year, and this trip was the result.

DaveFM, BevFM, James (7) and Nicola (9)
Tinkershell, Neil, Stephanie (11) and Natalie (over 18)
and ourselves, Bev, Phil, Katie (6) and Molly(1) all organised seperate trips that would coincide. We all stayed at different places, and planned some activities together and some apart. I don’t think any of us were really sure how it would work, or how much time we would spend together or apart, but fortunatly it worked extremely well (at least for us, I hope everyone else agrees

at some point on Day 1, I agreed to write trip reports, if everyone else added their thoughts afterwards, so here they are…

My notes are quite brief, but I am hoping, that combined with my 900 photos, they will be enough to remind me of everything that happened!

So, without further ado, I present – Day 1

We are booked on the 8am flight from Newcastle, which sounded quite respectable, until I realised that means we have to check in at 5am, leave the house by 4, so I find myself setting the alarm for 3.15 – Uuurghhhh…

It was very cold, wet and rainy, but we piled everything and everyone into the car, and Phil’s dad drove us up to the airport. We got into the check-in line and spotted Michelle, Neil, Steph and Nat (hereafter known as MNSN) in line ahead of us.

We were fairly painlessly checked in, and through security, and we all met up in the lounge for breakfast and shopping. Not a lot to tell, we waited around, as you do, headed down to the gate, and noticed there was no plane there. Sat ages, still no plane, started to worry about the lack of plane, when we say it arrive, like a bird out of the sky. Assuming the plane would need emptying and cleaning etc, we figured we were in for a delay, but no, the plane had arrived clean and empty from Manchester, and we just had to board and we were on our way. 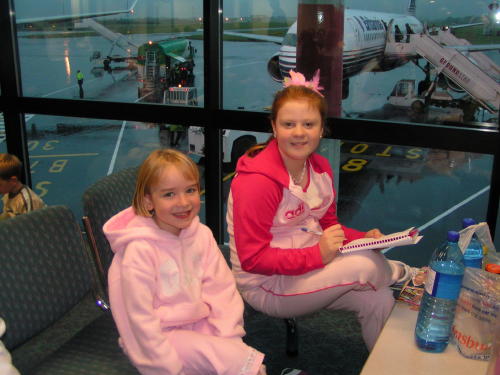 The flight was quite quiet, which suprised me as it was half term. In fact, there were only 4 people in Premium Economy. We managed to spread out, Molly got her own seat, and MNSN were spread out across two sets of seats. I was a little disappointed in the lack of seat back tvs, as Airtours do claim to have them, but this was a Monarch plane and fairly basic. Still it got us there in one piece, so I’m not complaining.
We landed at Sanford, and made one of the quickest passes through an airport I can ever remember, we were in the in under 45minutes, and managed to squeeze everything into our car which was bigger than we booked (but none of us can remember what model it was). MNSN had the Neon which they (and we) had booked, and it looked rather squashed in there, so I was pleased we had received a bigger car.

We took the 417 all the way to Disney, and cheered as we passed under the Walt Disney World signs. You really are there when you see those signs. Shame we couldn’t see any other signs, like one’s telling us where Port Orleans is. We got totally lost, even though I had a pretty good idea where the resort was, but eventually we found the hotel.
We had 2 linked reservations, in order to take advantage of the Ap rates, and it took a while to find a room that was available for our full stay, as i didn’t fancy moving rooms halfway through the trip. Eventually she found one, and we were on our way to room 2422 in Alligator Bayou. 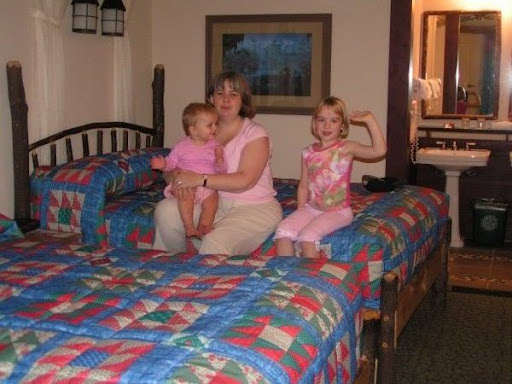 Apparantly, this was a renovated room, I only know this because the guy that came to change the lightbulb commented that he had never seen the bedspreads before.
The room was very nice, but the location was quite poor, it was way in the back of the resort, and miles away from everything. Although not too far from the West bus stop and the car park.
I wasn’t unhappy with the room, but I wasn’t massively impressed either, it all just seemed very ordinary.

Amenities wise, we had coffee maker, hair dryer, iron/board, fridge, safe. the coffee appeared to be free as well, and I think we paid for that at the caribbean beach in 2001.

We unpacked, and went for a swim (the quiet pool was right on our doorstep).
After the swim we decided to head to Magic Kingdom (it was only 5pm, one of the benefits of an early flight), so we took the bus, and went to our favorite place for tea – columbia harbour house. I had to keep pinching myself, it had been an awful few weeks, and I hadn’t really believed we would ever get there, so it was just amazing to think, I am really here

we didn’t do much, just wandered back down main street and picked up some sparkly ears & a Princess Autograph book for Katie 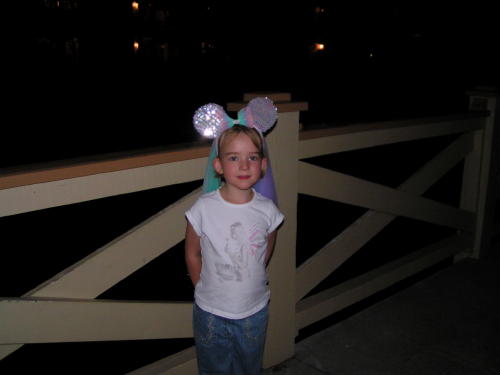 Just as I was paying for the ears, we had a call from M&N to say they were on Main Street too, so we headed out to meet them. We shared a moment of ‘Wow, we are really here’ and ‘Oh my god, it’s like 4am right now’ and then we decided that we were really to exhausted, so we headed back home on the bus, and collapsed into bed at 9pm – we had been up for a mere 23 hours, but we were here