I work up at 3am… I always do this on the first day or two of the trip, and while it’s kind of useful, it’s also quiet annoying.

We were all awake, and dressed by 6am, so we decided to go to Walmart on the Osceola Parkway. We headed out of the hotel towards teh Osceola, but whilst we could see the road, and passed right under it, we couldn’t see anyway to get onto it. Instead, we opted for the Walmart on the 192 cause we knew how to get there.
We bought loads of drinks (water and pop) and some nibbles, nothing fancy, just cereal bars and goldfish and chex mix.
We seemed to have spent an age in there, because it was after 7.30 when we left, and we had to meet everyone at Animal Kingdom at 8.30, so having had an early start, we ended up in a bit of a rush. We tried to go to McDonalds for breakfast, but the queue was massive so we gave up and went to Animal Kingdom instead.
We got there a little early, so we stopped at the stand outside the park and bought some coffee and sticky buns, and sat on a bench waiting for everyone to arrive. MNSN arrived first, and then we spotted Dave, Bev, James & Nicola (DBJN) and we all said hello, and how was your trip and all that stuff, and we headed into the parks. Hey Hey, we are here!

We were allowed so far into the park, and then we were stopped on the bridge facing the Tree of Life, and they did a Rope Drop – this is the first time I’ve ever experienced a Rope Drop and it was pretty cool, they did a little show and then a bus drove past with characters on and Mickey declared the park open. 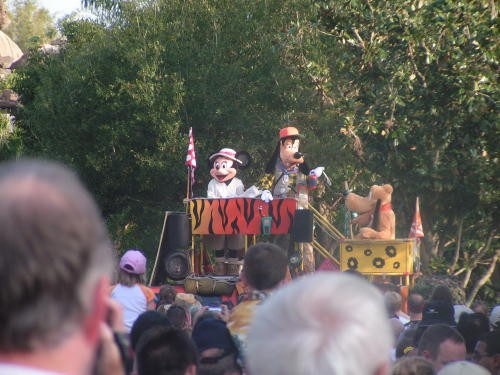 We headed round past it’s tough to be a bug, and since I’d never done it (nor Phil), and adults contingent was sent in, and the kids and bev went to find autographs. I quite enjoyed this show, I have heard loads about it, but didn’t know what to expect, and thought it might be scary, but whilst I wouldn’t take Katie in, I found it amusing rather than scary.
I did get a little worried at one point, so I grabbed Phil’s hand for comfort, only to discover I wasn’t sitting next to Phil, I was next to Dave. Not sure who was more surprised, me or him!

After ITTBAB, we picked up a FP for the safari and then walked around the gorilla trail. We got back and had 5 minutes to wait for our fast past time, so we declared it ice-cream time, and had mickey bars and ice cream sandwiches (my favorite).
the safari was superb – the best one I’ve ever done, there were loads of animals about, and they were all awake and moving. I didn’t get a photo, but the hippo rolling around on his back in the dust was one of the funniest things I’ve ever seen.

After the safari, we walked through to Asia and viewed the tiger trail (I know these trails have names, but I can’t remember which is which)
I’m not sure if this was on the trail or elsewhere, but it’s a cute photo, so I’m gonna chuck it in here. 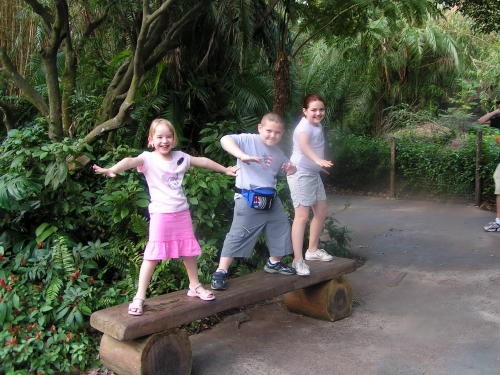 we walked round past the new everest ride 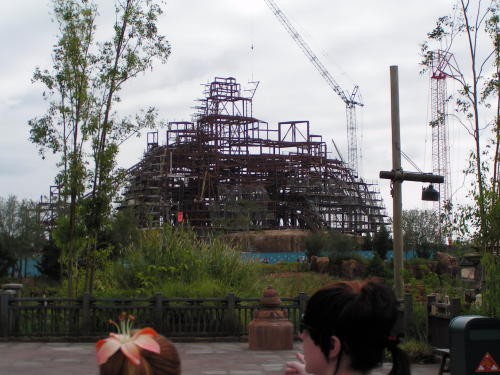 which looks big and scary! and went for lunch in the Flame Tree BBQ which was very nice, but since its outside you have birds and animals to contend with while you eat.
After lunch, we headed into the Dinoland area. This is actually my least favorite area in Disney, I think it’s tacky and nasty, but we wanted to try out a few rides we hadn’t done before (we being me and Phil), so we did Primeval Whirl – I am trying to remember who was on there, me, Stephanie and I think Nicola – I know Stephanie was there because she kept shouting ‘I’m going to be sick’ and then declared it awesome and went straight back on. I didn’t shout it, but I was feeling much the same way. I loved the first part of the ride, but then toward the end it starts to spin like a mad thing and I felt quite odd when we got off. While I was trying to hold onto my lunch, someone was off getting FastPasses for Dinosaur, and the kids went on Triceratops Spin (or Dumbo by another name)

we then all headed round to Dinosaur, and swapping kids around we all had a ride on this too. I quite liked this, but thought it was really dark in places, there were quite a few times when I thought there wasn’t really much to see it was just dark and bumpy.
Since the kids had spent a while waiting for us, we sent them into the Boneyard and waited outside having a drink and a rest.

After this, we headed out past a greeting area that used to be a boat dock (not sure the name of this area). the photographic evidence reveals, Pooh, Tigger and Eeyore were in this area
We introduced Molly to Pooh, but its fair to say she’s not too impressed with big scary furry characters 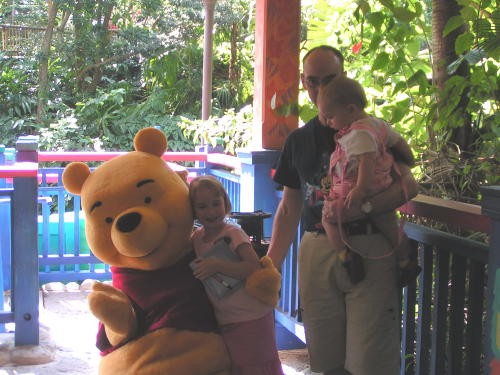 Our next port of call was the Lion King show, where we finagled our way into the Lion section (well who wants to be a giraffe, warthog, or elephant, I mean what sort of noise does a giraffe make anyway) – so we were rather rowdy roaring Lions instead.
I love this show, but I have to say it wasn’t the best I’ve ever seen – I think having seen it a few times now, I spotted things I might not have noticed first time round, but there were a few mistakes, the tumbling monkeys didn’t seem as impressive as normal, and I was sure the fire twirling man was gonna burn the house down, he didn’t have that usual level of confidence you expect from a man playing with fire in a tent full of people!

as we came out of the Lion King, the kids went to get autographs. There was some confusion while we sorted out pushchairs etc, and Katie ended up missing out on Minnie because she didn’t have her autograph book. It all ended in tears, not helped by the fact it was getting late and we were all tired, so things got rather fraught.
MNSN were getting tired, so they headed out of the park, while we sorted Katie out.

We calmed her a little, then spotted that the Pocahontas show was just starting – this is her all time favorite, so we begged to be allowed in the back – the CM let us in, but the time on the board was wrong as it was just ending not starting. Never the less, we watched the end of the show and this cheered Katie up no end. She absolutely loves Pocahontas.
We decided that we were all tired, so headed out of the park, but we ran into the parade, so of course, we had to stop and watch the parade. Well, the kids watched it, while the Bev’s went shopping. Hey, I’ve seen the parade before, but who knows what I might find in the shops

After the parade, we left the park, and spotted Minnie signing autographs, so one very happy Katie went over and chatted with Minnie 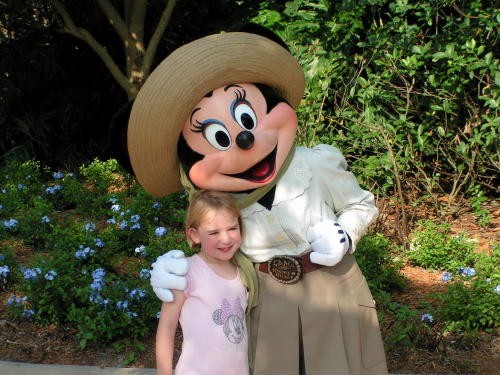 We were running quite late by now, so we headed directly to Animal Kingdom Lodge for our PS at Boma. We enjoyed a lovely meal with Dave and Bev at Boma – this is one of my favorite places. We tried all sorts of different things, and even Molly enjoyed the choices. I can’t remember any specifics, but do try it – in fact try it more than once, they change the menu each night, so it’s always different.

Back home to AB, and I decide to head to the food court for a coffee. It is way way too far too the food court and I am annoyed by the time I get back, but it’s a minor blip on a lovely day.