we slept a bit later this morning, the jet lag is starting to wear off a little, but we were up and in the food court at Port Orleans Riverside by 7am. The food court is quite nice but I can’t remember what we had to eat. Must take better notes next year.

She looks over her right shoulder

‘Your other left’
She bursts into fits of giggles and spots me on the other side of Spaceship Earth.

We decided to go into the shop nearby and get hats while we wait for DBJN to walk through from the International Gateway. We all (and I do mean all) bought new hats, although for some reason I bought a visor, even though I bought one last year and it was uncomfortable. After a few hours I said to Phil, this is too tight, and he says ‘Yes, so was the one you bought last year’ – Oops…

All kitted out with new hats, we head round to Test Track to pick up a Fast Pass. While we wait, we do some shopping in Mouse Gears – then back to TT and in the FP line which is about as long as the standby line – there is no line at all, we could have walked right in. Never mind, we are on, and it’s Katie’s first ride on TT, so she is a little unsure, but her verdict was BRILLIANT.

After TT, our next stop was Spaceship Earth – this actually had a pretty long line for SE and took about 10 minutes to get on. We had a bit of confusion boarding as the girls went on as a party of 3, and then I said ‘Party of 12’ to the loading man, not realising the girls had said 3, and we got told off when there was only 9 of us left. Anyway, all boarded we enjoyed our trip through communication, and Molly had a nap which was a bonus. I didn’t manage to get her off the ride and into her stroller though, so it was a short nap.
The end of the ride was a bit disappointing as AT&T no longer sponsor it, so all the cool stuff is gone and you just leave the building.
The kids fancied a trip to Ice Station Cool next, I’m not a fan due to the abuse that Beverly always takes, but they were thirsty so off we went. Beverly is still pretty horrible.

We had a great idea now, we would head round the World Showcase and sample the food and wine festival
On our way there, we pass the sprinkler area, so the kids go in and get thoroughly soaked

Molly was having a great time, she worked out that the water went on and off, and would wait at the edge for it to stop and then cross through. She is just barely walking, so was rather cute and had a little audience of old ladies admiring her. 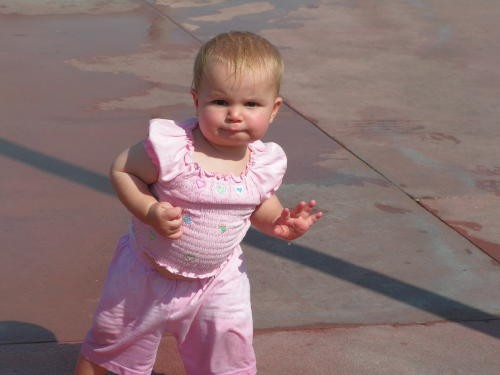 – so we set off through Canada and into the UK. The Rose and Crown looks inviting, so we stop at a table outside for a beer, and another, and then some fish and chips, and then a street show starts, so the kids watch that, and then they see Pooh and Mary Poppins, and another street show starts, and what do you know, the Beatles are on in half an hour, and before you know it we have been sat in glorious sunshine in the ‘UK’ for nearly 3 hours. 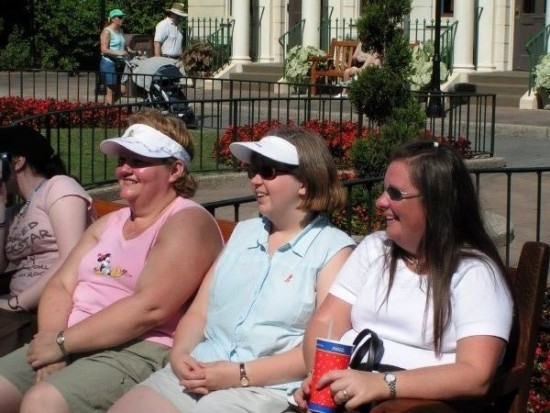 After the Beatles we decide to head out to the Lake Buena Vista outlets to try and find some matching t-shirts for the MNSSHP the following evening. We all head over there and check out the first Disney outlet, but there’s not much there, so we walk round to the other one (I can’t remember the name, but it was right on the far side of the outlets), when we get there it’s closed. So back to the original shop, and a rummage later and we find Haunted Mansion t-shirts for everyone.
We all split up and did some shopping – I had a good shop in Osh Kosh and got loads for the kids.
We are now shattered so we go back to the room and all crash out on the beds. Molly has been asleep since 3pm and when we wake up at 7 she is still asleep – 3pm is 8pm which is her bedtime at home, so she is really out for the night. I manage to wake her up, as I don’t fancy a 3am wakeup call, and we all head round to the food court for a very sleepy dinner.
After dinner, I look in the resort shop and find a leather Disney album reduced to $13 (they are normally $30) so I snapped that up, then it was back to the room and to bed.