We woke up rather slowly again this morning, and headed out around 8am to do some shopping. First stop was the Premium Outlet Mall as I wanted some princess dresses for the girls for the MNSSHP that evening. Unfortunatly the Premium Outlet is not open at 8am, in fact, it doesn’t open until 10, so our plan of breakfast and then back to the Outlets didn’t work either.
Instead, we went to Target, which is my new favorite store, you can keep Walmart, I am definitely a Target girl – nearly as much choice, and it’s got carpets.
We found some fab red glittery shoes which would have done Dorothy proud, a lovely cinderella dress which will be perfect for an ice-skating show Kate is in, and some shorts and bits and pieces. After Target, we decided to go to Cracker Barrell for breakfast. I could see this across the carpark but wasn’t sure if it was on the same side of the road or not, so I asked in Target if we could walk – I was told we could but it was really far. Well, since Molly was asleep in the stroller we took the chance and Phil and Katie walked, and I drove across. It was all of a 5 minute walk, really no distance at all.
I hadn’t been to a cracker barrel before, but it is a new favorite – the food was lovely and the store was like a treasure trove, I could have spent all day in there, it is however, not very toddler friendly so I had to be quick. We had loads for breakfast, can’t remember the details but I do remember the grits (didn’t eat them) and the biscuits (did eat them, they were lovely) as well as pancakes and sausage and eggs and loads of other stuff – really nice breakfast which I would recommend.

After breakfast, we headed to the Florida Mall where I was sure I would get Princess Dresses in the Disney Store. I was wrong… they had very little in the way of costumes. Katie already had a Jasmine outfit with her, so she decided to wear that, and we bought some Jasmine jewelry to go with it. Molly was a bit more difficult, we looked quite a few places but we couldn’t find any tiny outfits, so we gave up and left the mall. On the way out, we spotted a very cute dress in Dillards, so Molly wore that for the party.

We made a quick stop at the scrapbooking store near the Florida Mall, and met a girl frmo Shropshire called Julie who worked there. She was very excitied to have a British scrapper the shop and we chatted for ages, in fact, so long that I ran out of time to buy anything (honestly!), I did pick up a few books and magazines and decided to come back later for other bits.

We headed home, and decided to try the French Quarter for late lunch/tea for a change. As soon as we walked in I knew I had made a mistake with the aligator Bayou, the FQ was just beautiful and I was very cross with myself for doing so much research and still making the wrong decision. We headed back to the room to get ready for the party, and I was really bummed about the room as it just wasn’t as nice as the FQ looked.

We all got ready for the party 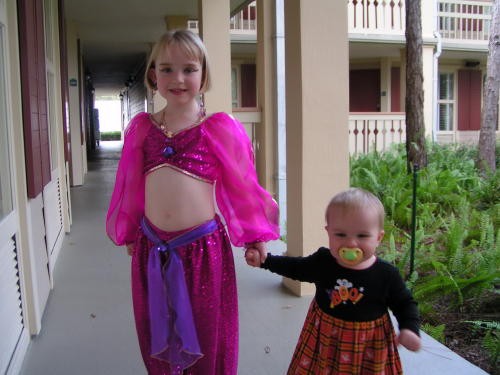 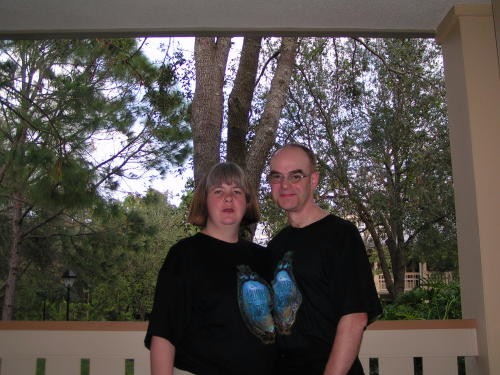 and then took the bus to Magic Kingdom.
We met up at 5pm just inside the gates of Magic Kingdom, and then headed round to tomorrowland for tea in Cosmic Rays. When we came out, the party had started and there were characters and trick or treat lines all over the park. A quick wait in line for some candy and then we were off to ToonTown. Katie did Goofy’s Barnstormer, and then we saw loads of characters in costume, Minnie and Donald Duck were both there along with others – there were also loads of trick or treat stations where you could get candy. We spent ages in toon town, and then left along the little path to Space Mountain – this had Alice and the Mad Hatter and TweedleDee and Dum along it as well as more candy. The Cards from Alice in Wonderland were giving out candy along here too.
On arrival in Tomorrowland, the big kids did Space Mountain, and the little ones found a character parade and met the Galaxy Girls and Buzz lightyear 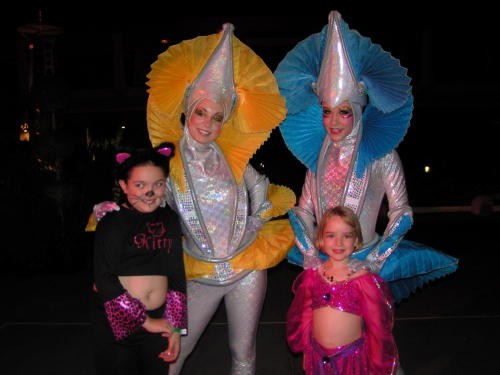 We decided to stop at the Photo station next and get a group photo, however, they wouldn’t take one of all 12 of us, so we had to get 3 individual groups taken – this was a shame as we were all matching so it would have been a good shot. 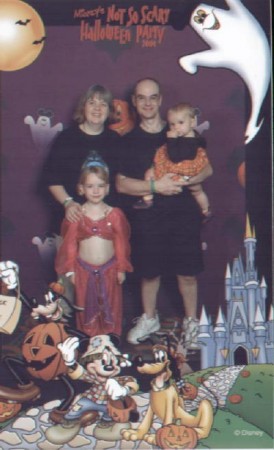 , the kids went on Buzz next, while we sat down again and had a drink.

We fancied Pooh Bear next, but when we got there it was very busy so we didn’t bother. We kept going and tried to ride the Liberty Belle for Halloween storytelling but we just missed it , so we headed to Main Street for the fireworks which were very good and not the same as any I had seen before – they started with a witch rather than Tinkerbell, and finished in a circle of fireworks going off all around us, which DaveFM said was much like the July 4th show.

We remained on Main Street for the parade whcih was excellent, if slightly scary. It started with the headless horseman and including a lot of scenes from the Haunted Mansion including some fabulous grave diggers.

After the parade, we headed back out to the bus and home.