The clocks went back this morning, so we slept late and had a nice leisurely start to our day. We got the bus to MGM where we were meeting Dave, Bev, James, Nicola and Michelle, Neil, Steph and Natalie.

We met up with them under the hat, and discovered that unfortunatly Dave & Bev hadn’t realised the clocks had changed and so they had arrived at MGM at 8am – which was an hour before the park opened, so they had spent some time sat on a bench waiting for it to open.
Dave & Bev had been staying at the Boardwalk, but the previous day they had moved to Saratoga Springs, so I quizzed them all about it – I would love to stay at all the resorts, so I tried to experience it vicariously through them.

We started on the Great Movie Ride, which as always had a long queue, I have never known this not to have a long line, and once again we saw the movie clips three times. What was nice was that we could all ride this, even Molly, so we didn’t have to do any baby swapping. The younger kids weren’t too sure though, and Katie pronouced it ok but she’d rather not ride it again. After the Great Movie Ride, we walked round and saw Jo Jo and Goliath at one of the caravans. JoJo may be one of the less known characters, but Katie and Molly watch him on Playhouse Disney so Katie was keen to meet him. 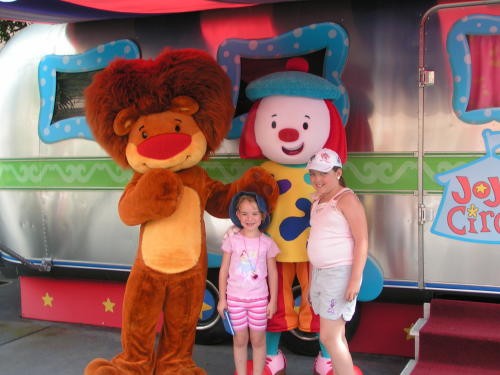 Molly was happy to watch from a distance but wasn’t keen on getting too close.

Autographs collected, we headed for the backlot tour – we must have timed this perfectly as we walked into a completely empty waiting area. Someone got chatting with the CMs and before I knew it, we were being escorted to one side, and Michelle, Neil, Natalie and Bev had been selected to be the stars of the show. 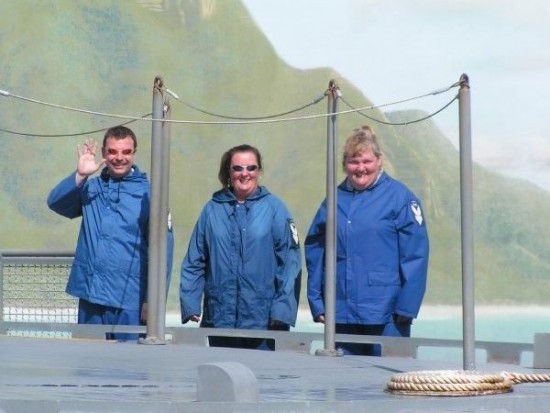 Michelle Neil and Bev were the crew, and Nat was in the control room 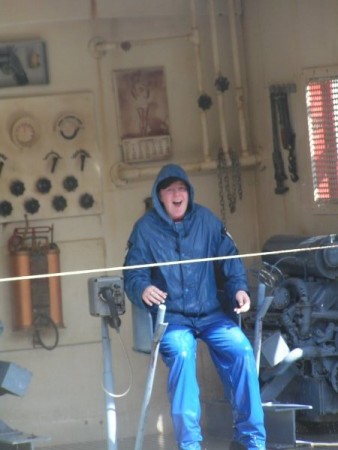 They put on a superb show, and Nat got throughly drenched, which is always nice

After their performance, we were ushered onto the bus for the rest of the tour, this is considerably shorter than it used to be, and basically you see the costume department, then go straight to the catastrophe canyon and that’s about it. You could see quite a lot of the new stadium for the stunt car show, which looks like it will be really good.

The backlot tour comes out quite near Muppets 3-D, so we went there next. I remembered to look under the mat, and there was the key! We all went in here too, so we were doing well with Molly today. Katie has been in Muppets before, but she’s never worn the glasses, so she decided to be brave today and try them, and she really enjoyed the show.
After Muppets, we came out to Woody, Buzz and Jessie signing autographs. Buzz is one of James’ favorites, so that was very exciting. 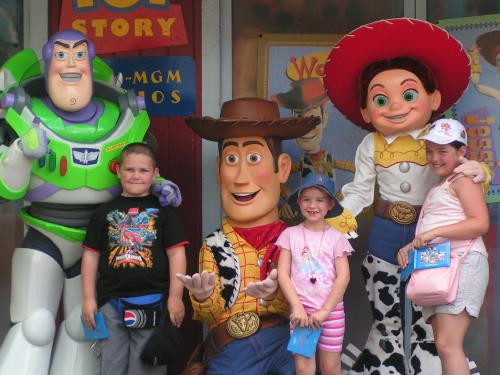 We hand lunch in the Backlot Express, which was ok, but nothing very special, and then decided to split up for a while, the older kids went off to do Rock N Rollercoaster, and Tower of Terror, while the younger ones wanted to see Playhouse Disney. Dave was desperate to take Phil and Neil into see Elasticgirl (from the Incredibles) as he had met her earlier in the week, so with kids in the show, men on the Animation tour and oggling characters, Bev, Michelle and I sat in the sun and babysat Molly for half an hour. Very pleasant it was too.

When we had all reconvened, we decided to take the boat over to Epcot and try out the food and wine festival. About time too I think, it’s Day 8 and I haven’t had a thing from the festival yet.

We walked down to the boat and made our way across to Epcot, it takes quite a while but it’s a very pleasant journey and it was nice to just sit down and relax for half an hour. We entered Epcot at the International Gateway, something I’ve never done before, so that was exciting (how sad am I? ) and right at the Gatewas was Snow White.
The kids went for a photo and autograph, while Natalie and Stephanie went to England to get some Beatles things from the shop, and then we all headed around the world in search of food and drink.
We seemed to get off to a slow start, but once we got in to the spirit of things we tried all sorts. I;m not sure what everyone else had, but I had

Clam Chowder in America (disappointing, I like the cream chowder and this was the tomato)
Bellini’s in Italy – these are gorgeous, we kept meaning to go back for more, but it just never happened.
Katie had a chocolate mousse from Italy and didn’t like it (strange girl), so I helped her out with that.
Next I tried some Aussie Shrimp on the Barbie – very nice they were, and then we came round to the Outpost and the kids wanted some ice-creams so we stopped for a rest. Bev bought a lo-carb coke, which is something I’d never heard of before. We all had a taste, and I don’t know if I would drink it, but I am a bit of a coke snob.
Next stop Maelstrom in Norway. Katie and James didn’t fancy this, so they stayed outside with Bev and Molly while the rest of us went in – and we had to WAIT – another ride I’ve never waited on. Ok, it was a very short wait, but still… While we were waiting we searched for the Hidden Mickeys on the wall, but we never found them. We did the ride, and then dashed through without watching the film. I did feel guilty for about 2 seconds, but I got over it very quickly.
I spotted a Hidden Mickey book in the shop on the way out and checked under Norway – apparantly there is a Mickey in the airline stewerdess’s shirt – I will have to go back and look for it next year. I think that the hidden Mickey book would be quite good fun, if you got it at the start of your holiday, you could check for them whenever you were in lines and tick them off, like a massive treasure hunt. I plan on doing that on our next trip.
After Norway, the younger ones rode on Mexico, while Dave went for a Beer by the lake (El Cantina de Mexico?). We had such a good time on the Mexico ride that we went around for a 2nd time! 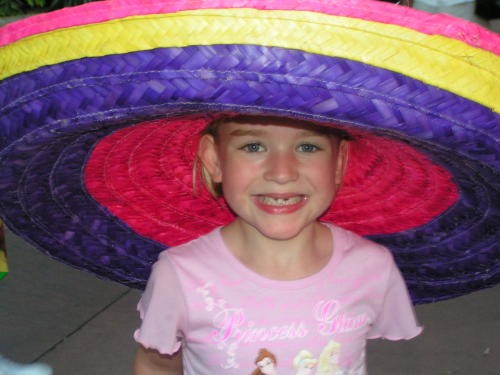 After Mexico, the braver folks went round to try and get on Test Track, and the rest of us went to Canada to catch the off kilter performance.
I picked up some pierogies and Kielbasa from the Poland stand, as I used to love pierogies when I lived in Pennsylvania, but they weren’t as nice as I remembered.
Just before Off Kilter started, Phil, James and Nicola turned up – the line for Test Track had been too long, so they hadn’t riden it, and MHSN had decided to call it a night.
The rest of us thoroughly enjoyed Off Kilter, and then headed back to the buses and home.