We wake up early and decide to pack so we won’t have to do it in a panic tomorrow, and also so we can see if we need to buy a new case.
We manage to pack relatively painlessly, but do decide that we will need a small holdall, so put that on the shopping list. All the shopping we have done the last fortnight, and I still haven’t bought myself any new jeans and that was top of my shopping list, so we decide to head to the Florida Mall.
While we are getting ready to leave, Bev and Dave ring to say they are going to have lunch at the Cheesecake Factory which is at the Mall of Millenia, so we change our plans and head there instead.
We headed up the I4 and had past the Mall before we realised, so we got off at the next junction and tried to make our way back to the mall. I thought we could follow a smaller road back down beside the freeway into the parking lot of the mall, but it just kept heading into dodgier and dogier areas, until I said to Phil, that looks like a jail, and he pointed to the sign and it was a jail…
we made it back to the main road, and found a back way into the mall. Our first stop was Target across the street from the actually mall, where we picked up a new holdall, and then we went into the proper mall – this is some fancy schmancy mall – I’ve never been anywhere like it -it has carpet and leather sofas in the public areas – I can’t imagine it would last 2 minutes in Gateshead, but it was all beautifully maintained and very impressive. Unfortunatly, it didn’t have any of the shops I was hoping to visit, so I was pretty much stuck with Macys. I did manage to get some jeans in Macys, and we got some clothes for Molly in Gymboree (but there was no Childrens Place, which is a favorite of mine), and then we met up with Dave and Bev and went to the Cheesecake Factory.

The Cheesecake Factory is kind of a strange place – the food is lovely, but the portions are HUGE, I mean silly huge – there is no way you can eat it all, and to be honest you will struggle to eat half. Every single person leaving this place is taking a box of food out with them. I just don’t understand this, but that’s the thing they do there. Another strange thing, is they have no kids menu, so they suggest the kids choose a starter. Katie chose “mini hamburgers” and she got 4 full sized hamburgers and fries – it would have fed our entire family. Portions aside, the food is wonderful, and I can’t complain about anything. We had a lovely meal, and somehow all managed to save a little room for dessert. 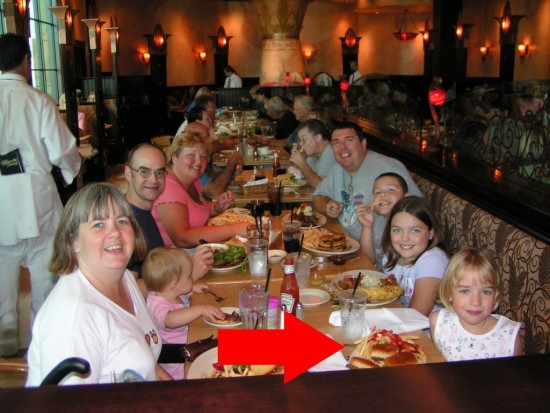 We had a lovely meal, and then waddled out of the restaurant, and split up to make our own way back to the hotels. Since we hadn’t come into the mall via the I4, we had immense difficulties getting back to the I4 and got completely and hopelessly lost, we managed to get on the Florida Turnpike and then the Beeline (although that in itself is a challenge, you can’t get from one to the other unless you have a Sunpass, we had to get off onto OBT and then back onto the Beeline – most bizarre)
anyway – we eventually made it home.

We didn’t have long to relax as we were meeting everyone at MGM at 5pm, well it was after 5 by the time we got back to the hotel – so we rang to say we would be late, and jumped on a bus to MGM – the plan was to see the last showing of Beauty and teh Beast and then Fantasmic and Wishes. We just managed to get into Beauty and the Beast as it started, and actually we had a superb view as we were in the higher seats right at the back

I took about a million photos, but this is Katie’s favorite, Belle in her ballgown. 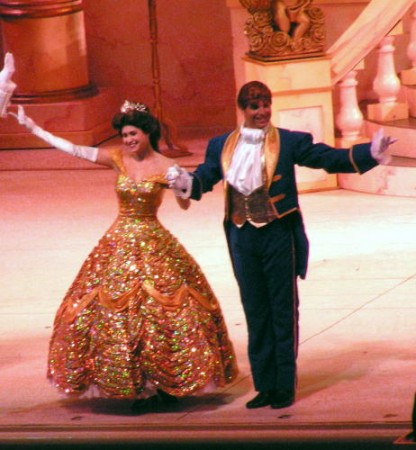 We thoroughly enjoyed this show, and were really pleased we had managed to get into see it.

After the show, we met up with Dave and Bev who were near the front of the theatre, and we all headed into Fantasmic. I have only seen this once before and it was from the very back, standing room only in the rain, so I was quite looking forward to seeing it properly. Katie had never seen it before as she has always deemed it too scary.
She was quite nervous, but having her friends along really helped to calm her down, and she really really enjoyed the mexican waves we did before the show, I don’t think she had ever done one before so that was a new experience for her.
We got there pretty early, so we managed to get good seats, and Michelle, Neil, Steph and Nat joined us, so we were all together for our final evening.
When the show started, Katie suddenly appeared on my knee nervous – but would you believe it, most of the first part of the show is Pocahontas, her absolute favorite. There was enough ‘good stuff’ at the beginning, that by the time the scary stuff started, she was relatively ok – she did sit on my knee with her head buried in my shoulder, but she kept turning around to see what she was missing – afterwards she said it was very good but she didn’t want to see it again.

Show over, and we were people on a mission – we grabbed our stroller and attempted to make a quick exit out of the park, along with a few other thousand people. We made it out relatively easily, and headed for the buses, we had a plan and we wanted a bus to either Magic Kingdom or the Contemporary. Luckily, there was not much queue for the Contemporary, so we got on that bus, and it took us straight there. We were wondering if half the bus would be heading for the Magic Kingdom, but when we got off it looked like we were the only ones who had had this idea.
We entered the Magic Kingdom for the last time

and found a spot on main street right by Caseys Corner to watch wishes.
I have seen them before, but frmo Liberty Square, so this time we decided to see them from Main Street to see if it was any different.
By this time, it was late and Molly was shattered – she couldn’t sort herself out and get to sleep and she was getting really really ratty. We were on the verge of having to give up and go home, when I decided to try the baby care center. I took her in there and we went in the nursing room and I gave her a bottle – it is lovely and dark and quiet in there and we had a nice comfy chair to sit on, and she settled right down and had her bottle. She didn’t fall asleep, although if I had stayed long enough she might have done, but she was much much happier for the break. I have to confess to being a little worried about missing the fireworks, so once she was calmed down, we headed back out to Main Street to see them – they hadn’t started yet, so we didn’t miss them which was lucky, cause they were awesome – a totally different view seeing them from Main Street rather than Liberty Square, and all of Main Street was lit with pretty white lights and it was all just beautiful. It was quite an emotional moment knowing that we had to go home the next day, but it was a really perfect evening to end our trip with.
After the fireworks, we headed out of the park, and as we left, Mickey was standing at the train station saying goodbye – this seemed particularly poignant as well

My photo isn’t very good, but here he is saying goodbye and asking us to come back again real soon. 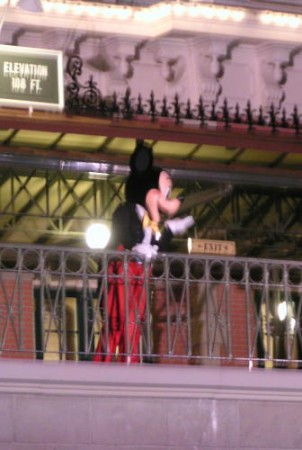 We said Goodbye to Dave, Bev, James and Nicola which was really hard as we didn’t think we would see them again until next year. (Michelle, Neil, Steph and Nat were on our flight home) and got the bus back to our hotel and to bed.