We have no plans for today,   and we are flagging a bit after a couple of busy days,  so we decide to take it easy today.   Our friends are arriving this morning,   so we want to meet up with them and catch up.
After a bit of a lazy start,  we decide to go out to Perkins for breakfast.   We head over to the Crossroads,  and for some reason we can’t find Perkins.  We’ve eaten there before, but none of us can remember exactly where it is.   We decide it must be further up the road,  so we leave the Crossroads plaza and head unto Palm Parkway,  but that’s a Denny’s not a Perkins,   so it’s time for a U-turn,  much scratching of the head,  and checking the map,   back into Crossroads,  and we spot Perkins straight away this time.     The sign was hidden by a large bush.

We all order a combo plate of Pancakes, eggs, sausage and hash-browns,  except for Molly who has a city slicker.
We didn’t take any photos as we dived in as soon as the food appeared and by the time Molly reminded me, there wasn’t much to photograph. (Molly is responsible for any food photographs I take,  as she always reminds me to take the shots).

We enjoyed our breakfast,  and some drinkable coffee.    We’ve bought some Maxwell House for our room and it’s absolutely disgusting.   I am not a fussy coffee drinker,   we usually just drink instant coffee at home,   but the Maxwell House is awful,  I actually thought the maid had left cleaning fluid in the machine initially.  Anyway,  the coffee at Perkins is quite nice,   and just as I am leaving the room,  I get a text from Dave and Bev to say they have arrived at the Boardwalk but are homeless as their room isn’t ready yet.

We arrange to meet them at Old Key West,   and they arrive just as we do.
We all sit in our room,  which is a studio,  and once again I think I prefer the layout of the studios with the sofa bed.  There really isn’t anywhere for everyone to sit,  and the room is quite dark as the only windows is the patio door and the blind won’t stay up.

We sit and chat for a while, as we haven’t seen each other for a few years,   and then decide to split up and meet again later to go to Hollywood Studios for Fantasmic.

We decide to head to the Altamonte Mall as I’d heard it had better deals than the Florida Mall since it’s away from the touristy areas.

The Altamonte Mall is up the I4 and when we pull onto the I4 the traffic is insane.   It was about 11:30 so it shouldn’t really be rush hour but it was extremely heavy.  Eventually we get there and park up outside Sears.   Molly has had a bit of a pout as Katie is wanting to look in Hollister, and she wants to know why she can’t have designer clothes too.   So we take a look in a few kids shops first,  but she’s not interested,  she wants the real deal!
A couple of people had suggested we take a look in Aeropostale,  so we start in there ,  and it’s great.   They have loads of things on sale and we end up with a big bag full of stuff.
Katie wants to look in Hollister,  so we head there next,  and they have some good bargains in there as well.   In Newcastle,  the only sale items are always hidden away at the back,  but it seems like most of the store has got sale items displayed and she ends up with a couple of things from here too.
The kids are ready for some lunch,  so Phil takes them to the food court for a McDonalds,  and I decide to try and buy something for myself.    I have a mooch around Lane Bryant but it seems the prices have gone up quite a lot in here too and I don’t really find anything that I fancy.  Which is a bit disappointing as I normally buy my jeans and work trousers in here because they seem to fit better than at home.
After my unsuccessful shopping trip,  we meet back up and decide to head out.   It’s just after 3 when we leave the mall,  and the car says it’s 105 outside.   Ouch.
We get back on the I4 and the traffic is even heavier than before.   It’s stop, start all the way.   When we get to I-drive,  we think it would be better to get off and go down Turkey Lake road.  This proves to be a big mistake, as we can’t actually get off the slip road.   We end up sitting on the slip road for about 20 minutes.   Eventually,  we get off the slip road and onto Turkey Lake road and the traffic is much lighter.   By the time we get back to our room it’s after 5,  and we are meeting our friends at 6,  so it’s a quick change and back out again.
Just as we leave the room,  the heavens open.  It’s absolutely chucking it down.   We grab the ponchos, but assume we won’t be going to see Fantasmic tonight.
It’s a short drive around to the Boardwalk,   and we find our friends, and sit and have a drink and a chat whilst we watch the rain, and ponder what to do.    The rain starts to clear,  so we decide we will go ahead with poncho back up just in case.
We take the boat around to MGM and get to the park around 7:30.  Fantasmic is on at 9 or 10:30.   People are already queuing for the 9 o’clock show,  and I really don’t fancy waiting for an hour and a half,  it’s a good show but it’s not that good.   So we decide to do a few rides, and see the later show.

The kids want to see Muppets 3D so we head over there first,  and I am totally amused when Katie shows James the key under the mat, and he’s never seen it before.

They are Disney veterans, and Muppets is one of his favourites,  but somehow he’d missed this. Bev (his mum, not me),  said ‘We must have done this show at least 30 times and I never knew it was there’,   I love these little things.
After the show we decide to get some dinner.   Most places are closed,  so we have a choice of ABC commissary,  or ABC commissary,   so that’s where we head.  We have burgers, and fish and chips etc.   Not gourmet fair,  but it’s quite nice and it’s does the job.
We decide to do Great Movie Ride, and walk into a completely empty theatre.   I’ve waited some stupid times to do this show in the past,  but we walk straight to the front.    We have a very enthusiastic guide who starts off our tour.  Unfortunately,  we are ambushed by the most lame gangster I’ve ever experienced.   She is so quiet we can barely hear her,  and she’s definitely not scary.    We leave the ride and head down towards the theatre.    They aren’t letting anyone in yet,  so I ask when we should queue up, and am told the 10:30 show won’t be full so there’s no need to queue.    There is some debate about another ride,  but we end up going shopping 🙂   I spend a while admiring some designer handbags,  but I am really not a $200 handbag kind of girl.    I do see rather a nice bag for considerably less than that, so drop a rather unsubtle hint to my DH about my upcoming birthday.

After shopping,  it’s time for the show.   We are let into the theatre waiting area, and then quite quickly into the theatre itself,  and we find ourselves seated right in the middle of the arena.   The CM was right,  it’s not at all full,  with most people sitting in the middle two sections, and the end one’s are just left empty. 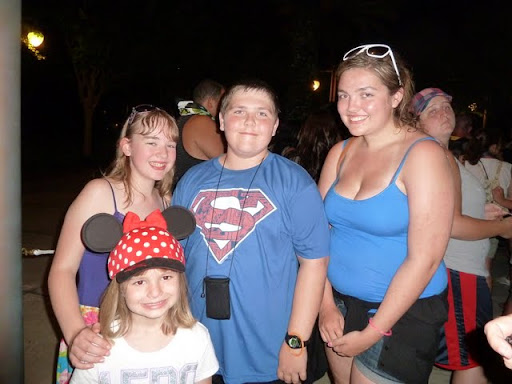 There’s no waiting around doing Mexican waves,  like there is for the early show.   The show starts quite quickly.    It’s a bit darker than I remembered,  but Molly was ok sat with the big kids,  I noticed she’s snuggled right in with her sister at one point.
It’s a long time since we’ve seen this show, and I think it’s changed a little bit.   Nothing significant but there are a few things I don’t remember.

After the show is over,  it’s quite late,  so we head out and onto a boat back to the Boardwalk.    We retrieve our car and head home.   Molly is asleep before we leave the carpark.  It’s after midnight by the time we get into bed.  It’s been a late night,  but it was very good.    I really enjoy visiting the parks later on in the evening,  the crowds are much lighter and the heat isn’t so intense,  plus all the lights are really pretty and give the place a different atmosphere.