We are starting to run out of days before we move to the beach,  so the panic that was avoided early in the week has finally surfaced.  We may not be going home for over a week,  but we’ve only got a limited number of days left at Disney.

So,  regardless of our late night,   we have to be up early and at the bus stop for 8, so we can get to Animal Kingdom for opening.  There’s not time for lying in on this vacation!   Molly really doesn’t want to wake up,  but we manage to rouse her, and we do make it to the bus stop on time,  which is quite frankly a minor miracle. 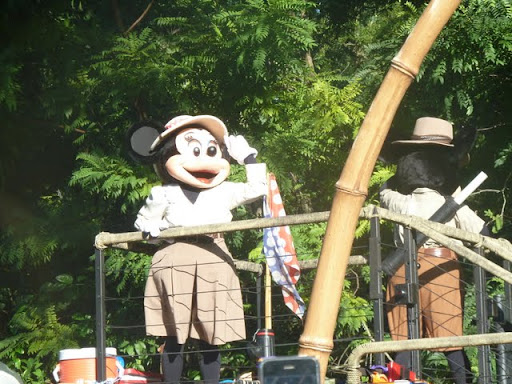 The bus gets us to Animal Kingdom for Rope Drop and the we hot foot it around to Everest.    We’ve done 3 rope drops now, and this is the strangest one as there isn’t one specific target,  people are heading in all different directions for their favourite first ride.    We get to Everest before it’s open,  and just join the standby line.   After Katie sat it out the last time,  she is determined to ride but she’s nervous.   James has opted not to ride,  so he’s despatched to Harambe for Fast Passes for the safari.    Fortunately for Katie,  the standby line is extremely short and we are on the ride within just a few minutes.   She’s still not sure,  but the lapbelt is down and we are on our way,  so there’s no turning back now.    She survives the experience,  but I don’t know if she will rush to do it again.   She doesn’t believe me that she went upside down,  even though I assure her that she did!

As it’s her first ride,  we opt to buy the ride photo.  She looks quite calm on it for someone whose supposed to be terrified! 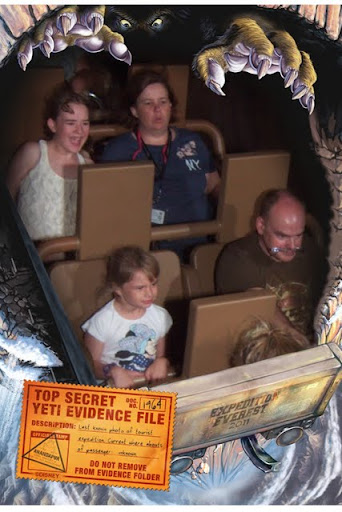 Fortunately,  it’s been a fairly positive experience.   I’d like to think this will mean she will try other rides,  but I don’t want to push my luck.

We head over towards Harambe for the Safari,  stopping enrolee to visit with Turk and  King Louie.

The Safari is really good,  there’s loads more animals out and about,  although they are mostly all on the wrong side of the truck.

After the Safari,  we run back around the park to catch the Nemo show.   We are doing very well at avoiding the queues, but not so well at planning a logical path through the park!   We get in just as they are closing the doors,  which is my favourite time to get to a show.  I’d rather sit at the back then wait for half an hour for the front row seats.

I’ve mentioned before that I love this show.   I just find it really emotional at the end.

Molly is not feeling the emotion,  she’s feeling hungry instead,   and she decides to let everyone know.  Feed me……  Or else…..   To be fair,  we didn’t have any breakfast,   and we didn’t have a big tea last night,  so it’s not really surprising that she’s hungry.

We walk around to Flame Tree BBQ via Pooh Bear and Friends. 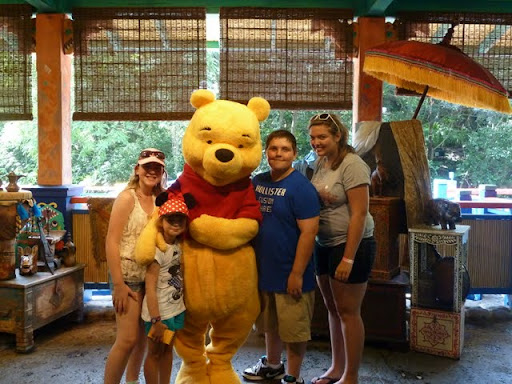 Our friends want BBQ , but we love the Yak & Yeti which is just around the corner,  so Phil and I head up there and get some lovely chinese food.   We had Honey Chicken,  Sweet and Sour Chicken,  Phil had a salad and Molly had Spring Rolls.   We had 4 enormous drinks,   we really only needed 2 but I didn’t think when I was ordering.  I think it was around $50.

We then carried our food back down to the Flame Tree.  It’s not far , but the drinks don’t come with lids in AK, and the cups were massive and full,   so it felt a little like an it’s a knockout competition,  trying to get through an obstacle course without spilling a drop!  Of course,  logically we should have bought the drinks at the Flame Tree,    but I just didn’t think…..

The food is really good,  one of the better counter service options,  if you like Chinese of course. 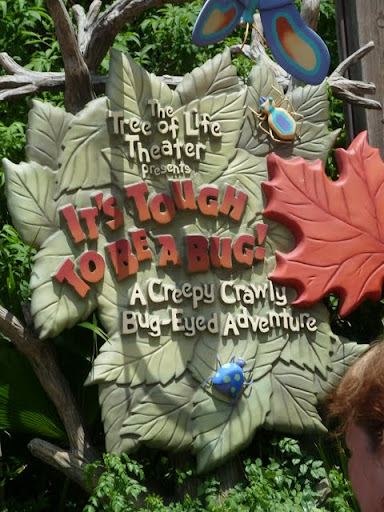 Once we are fed and watered,  we take a trip to Its Tough to be a Bug.   This is another first for Katie.  Whilst  I am pretty sure she will be ok with it now,  I would have never brought her in when she was younger,  as I know she didn’t like dark loud shows.    However,  there were plenty of little ones in there, and they were all crying.    It’s a pretty intense show if you are three and have no idea what’s going on!  I think Katie enjoyed it,  at any rate we didn’t have to leave the theatre,  so I’ll take that as a success,   Molly was fine but she sat on Phil’s knee so she missed a lot of the effects.

After the show,  Molly really wants to meet the characters at Camp Minnie Mickey,  but when we get around there the queues are enormous  and it’s getting really hot now,  so I’m afraid Molly get’s vetoed with some probably false assurances of seeing them next time.   Our days are numbered now, and I’m not sure there will be a next time in 2011,   but we will be back eventually and they will have to be top of the list then.

We have some drinks and ice-cream,  and then it’s into the Lion King show.   This was my favourite show at Disney until Nemo took the top spot.   They’ve had a cast change in the last few years,  and I am not so impressed with this cast.    It’s still a good show,  don’t get me wrong,  but I had seen the original cast many many times, and it just doesn’t feel quite right with new people in it.  Or maybe, I’m just old and stuck in my ways.    Yeah,  that could well be it.

As we leave the Lion King we have a debate,  the kids want to do Kali River Rapids,  the adults want to go home.    We don’t have a fast pass,  so we decide to look at the board on the way out and see what the wait time is.   Fortunately it’s 50 minutes,  so the adults win,   and we promise the kids a swim instead.      We get on the bus,  and it takes ages,  eventually we get to Blizzard Beach and loads of people get on,  and then after what seems like an hour we pull up at the Swan.   The bus driver says we can get off at the Swan,  or wait and he will get to the Boardwalk eventually but it’s the 5th stop.    We decide to walk as it’s not far.

This proves to be a poor decision….   Just as we are walking over the bridge to the Boardwalk we can see the rain coming.   It’s raining about 20 yards to my left,  and it’s raining to my right,   but where we are walking it’s dry.   briefly….     We make it to the awning of the Boardwalk as the heavens open,   and then we are trapped.   We are under a shelter, but we can’t actually get anywhere without leaving our shelter.   We stand there for a while and debate our options.   Phil and Molly decide to make a run for the back door,   and I opt for running along the front of the Boardwalk to the shop.  We have ponchos.   Dave, Bev and kids have no ponchos so they decide to wait a while longer, and Katie stays with them.     I make it to the shop without getting to badly drowned,  and pick up some bagels for the room.    When I get back to the room, Phil and Molly haven’t fared quite so well,  they got stuck getting the back door open as it was flooded and they were rather wet.   About 10 minutes later Katie appears,   the rain never slowed so they had decided to run for it anyway.

We are all shattered after our late night and early start,    so the kids watch the Disney Channel, and Phil and I have a nap.   I could have quite happily napped all evening,  but we decide to make a move over to Red Lobster for some tea.

Red Lobster is one of our must do places,  but we have a bit of a strange evening.   The food is all good,  but none of us feel very well after we leave.   Molly is sick but then feels fine again about 15 minutes later and Katie and I are a bit iffy.   We aren’t sure what it was, but it was a shame as we had enjoyed our meal.

We head back to our room to see how we are feeling,  and also watch the weather.   Within half an hour, everyone is fine and the weather looks ok,  so we decide to walk over to Epcot and watch Illuminations.    We get there around 8:30 and find a spot near Morroco which turns out to have a really good view. 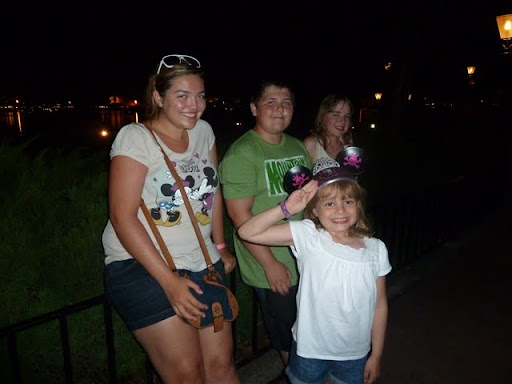 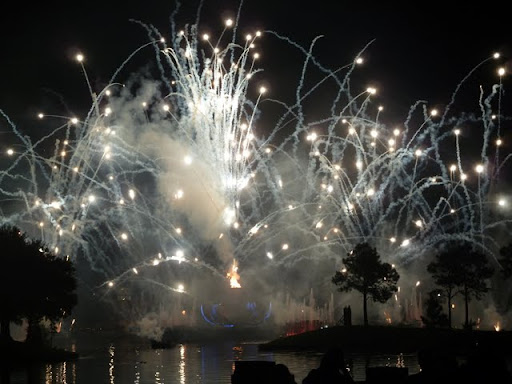