We are getting down to our last few Orlando days before we leave for the beach,   and we still haven’t seen Wishes,  so our plan is for a lazy morning and then Magic Kingdom in the afternoon/evening.

We start the day at the pool.   Well,  Phil and Molly are at the Pool,  Katie is reading her book and I do laundry.   Not very glamourous but there you go,  clean pants are an essential of life.

It’s a very pottery kind of morning,  not a lot to report and I didn’t take photos of the laundry process.   The machines are quite slow,  so it seems to take ages.    Eventually,   the laundry is done and we decide to go to Celebration for brunch.  This has been on my wish list for a few years but we never seem to make it.

We find Celebration easily enough,  it’s Disney’s town and it’s just at the end of World Drive,  we don’t even have to venture onto the 192.  We have a little drive through Celebration and manage to get parked not to far from Market Street.    There is even a market on today. 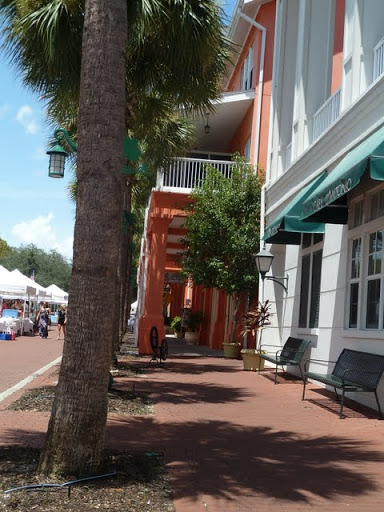 We get a pager for the Market St Cafe and take a wander around the market.   Nothing really takes my fancy but it’s nice to wander around browsing and pop into the shops as well,    not really something we’ve done on this holiday at all.    Fairly quickly our pager buzzes and it’s time for breakfast. 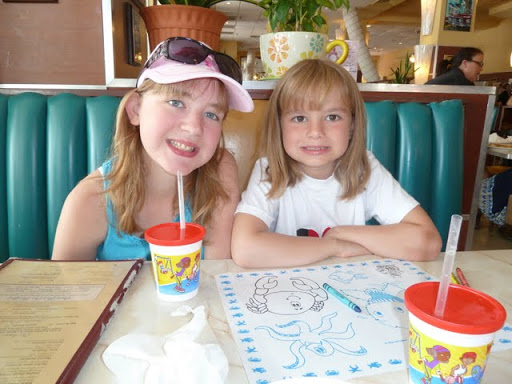 We all order pancakes, sausage etc  and it’s delicious.  The pancakes are absolutely enormous.  You just get one but it’s a good un.

We take our time over breakfast,   and then wander back looking at the shops.   Molly sees a Hello Kitty shop,  so we stop in there and she buys herself a new school bag.   This shop is Hello Kitty heaven 🙂

Molly is very pleased with her bag. 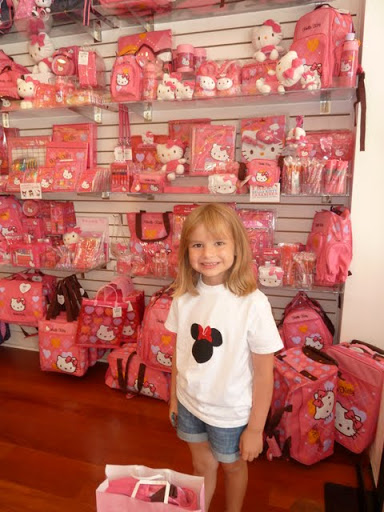 We have a little drive around Celebration.  It’s a very pretty town,  the houses are quite close together but it all looks so clean and pretty and even Molly says that it looks much nicer than home which is always dirty.   She is not wrong. 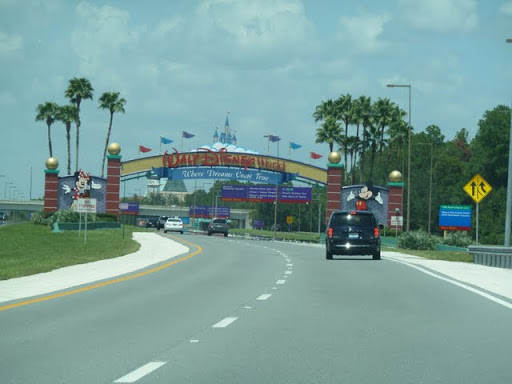 We go back to the Boardwalk and just chill for a few hours.   Eventually we make a move to the Magic Kingdom around 4pm.

Our first stop is to meet Princess Tiana.  She is in a little garden behind Liberty Square along with Prince Naveen.   Unfortunately,  we have to wait quite a long time for Princess Tiana,   she is on a break and it seems ages until she returns.    Molly is quite keen to meet her,  so we wait,  and we wait, Phil goes for fastpasses,  Phil returns with fast passes, and still we wait.  Eventually she arrives and things start to look up.   The child in front of Molly apparently has to tell Princess Tiana her life story as she is up there for ages,     so long that the people behind me are starting to get annoyed.   I think things might turn ugly, but just in the nick of time, Tiana manages to interrupt and wish her a princessly goodbye.    Phew,   a punch up in the princess line is never a good thing! 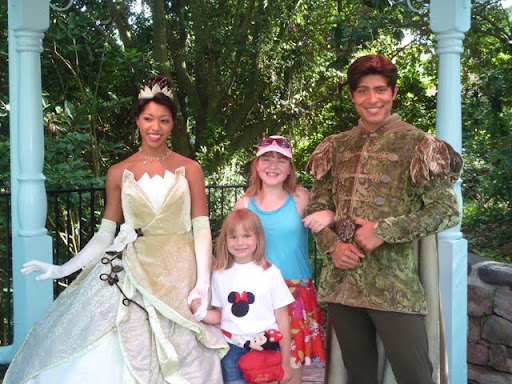 We’ve waited so long that our fastpass time is here so we walk straight around to Big Thunder and ride with no queuing.  Yeah for Fastpass!!! 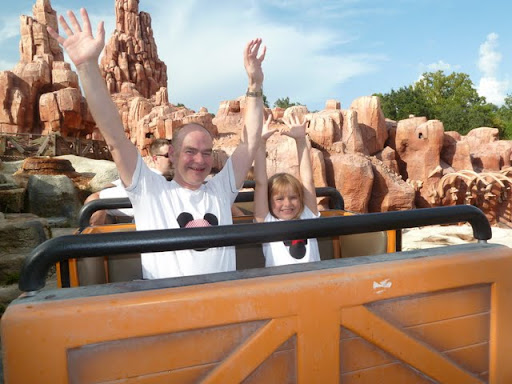 After the ride, we get some fastpasses for Splash Mountain.   These are for 8pm though so we will have to come back later to use them.

We want to go to Tomorrowland, so we decide to get on the train. 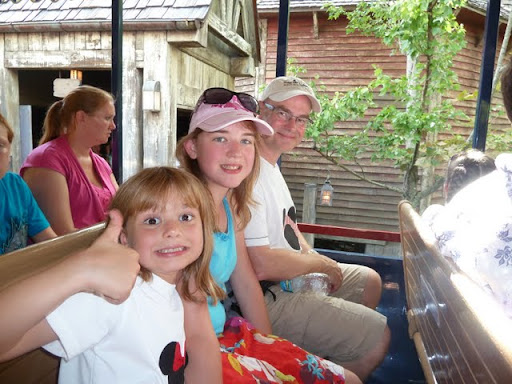 Unfortunately,  the train no longer stops on that side of the park due to the construction,  but the train falls into the ‘cool, sit down for 10 minutes’ category so it’s not a problem,  we also get some tantalising glimpses into the new Fantasyland area.  it looks massive.

We disembark at Main Street, and then walk back up through the shops,  I see a watch I quite fancy but at $125 it will have to remain a fancy rather than a reality.  I lose watches and sunglasses with alarming regularity so I stick with cheap and cheerful.

We finally make it to Tomorrowland and Molly ‘needs’ a mickey bar. 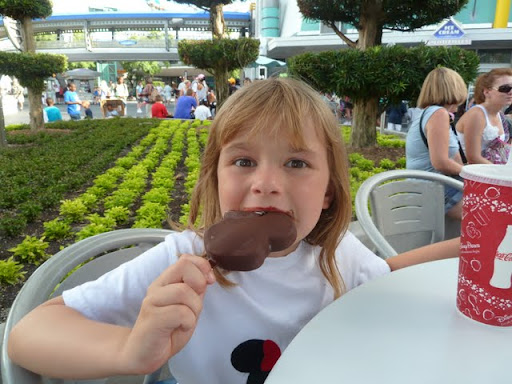 I know how she feels as I need a Coffee Float.  This discovery on our last trip to Magic Kingdom was a good one, and I’ve been looking forward to this all week.   I am not disappointed,  it’s very good.   Phil has a smoothie and Katie tries a coke float.   I like coke and I like ice cream, but I’ve never fancied them together,  however,  it’s not bad at all. 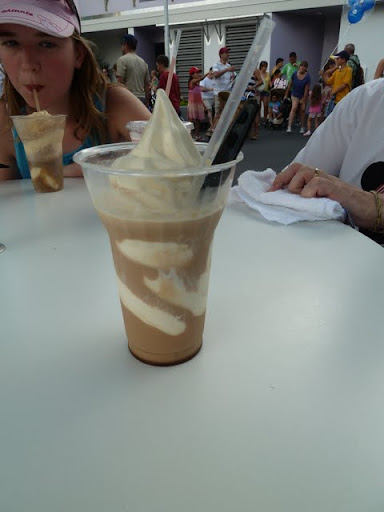 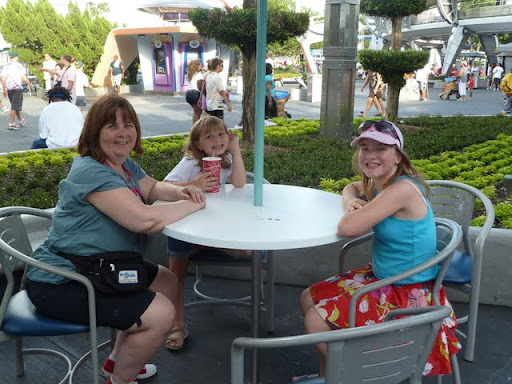 We do some big rides,  like the People Mover,   Buzz Lightyear Space Ranger Spin, and the Carousel of Progress.      It’s the big thrills that bring us to Magic Kingdom 🙂   We head out of Tomorrowland and see people sitting on the pavement,    it’s only 7:45 and the parade isn’t until 9.  I like a parade, but not that much.

We decide to walk around to Pirates and then get some tea at the Tortuga Tavern,  however we are thwarted by Pirates,   or rather a queue for Pirates.   We ride Pirates often,   and we normally walk straight on,  even on a busy day you can usually get on with just a short queue,  so with a queue out the door we decide to slip Pirates and move straight to dinner.    Except the Tortuga Tavern is closed,   and it’s really  not been that long since the ice cream stop,  so we are sort of hungry but not starving iyswim.

A quick debate and we decide to get the girls jacket potatoes from the cart in Liberty Square,    we take these into Columbia Harbour House and Phil and I each have a bowl of clam chowder.

After our light supper,   Molly has determined that it’s time for Splash Mountain so we head over there.  We are hoping to ride Splash and then catch the electric light parade.    We ride Splash in the dark,  which is quite cool.   Unfortunately, Splash lives up to it’s name and we are all soaking wet.   Hardly surprising I know,  but it was a little damp for the rest of the evening!

After Splash,  we make a mad dash for main street.  The plan is to get as close to the front of the park as we can before the Electric Parade starts.   It’s almost 8, and the parade starts at 8 but it starts at the other end of the park.     We actually manage to get about halfway down Main Street before we hit the parade.   The kids get an ok spot to watch and Phil and I stand near the shops and watch over people’s heads.   Maybe not the best view,  but we haven’t spent an hour and a half sitting on a pavement waiting. 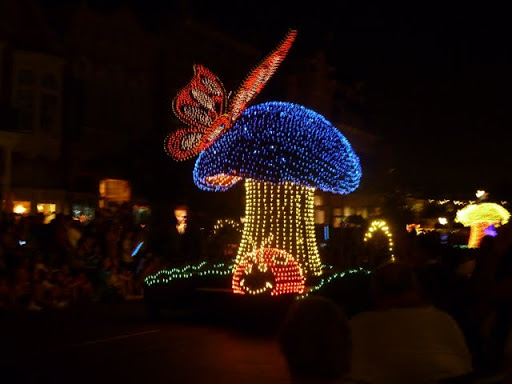 The parade is the ‘old’ Main Street Electrical Parade with the annoying synthesised music.  I’ve seen this parade in Disneyland Paris (and in WDW when I was younger)  but I think this has been updated/revamped,  although I can’t honestly be sure.   It still has a massive Pete’s Dragon float,   and I am quite sure the kids have no idea who Pete’s dragon is 🙂

After the parade we head down to the bottom of Main Street, as we want to watch the fireworks and the leave the park quickly.   We end up stood on the little roundabout, and have a reasonably good view.  They do the Memories show beforehand.   I’m not sure what I think about this.  The effects on the castle are amazing but I can’t see any of the photographs,  if my kids appeared on the castle I will never know.     There is also an annoying break between the end of the show and the fireworks.  Everyone is just stood waiting,    it seems they should have timed them to follow on from each other.

The fireworks do eventually start,  and they are always amazing.    I even manage to get a few photographs which aren’t too blurry,  and that really is amazing.  I only have a few from the end because before that I had ‘tall guy with child on his shoulders’ in front of me.   I know the kids want to see, but as soon as a child goes on shoulders, there are 20 kids behind who can’t see anything at all.    Anyone,  tall guy or not ,  the fireworks were great and I didn’t even cry which is a rare thing indeed. 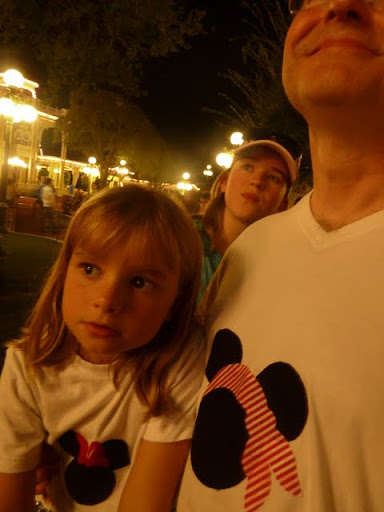 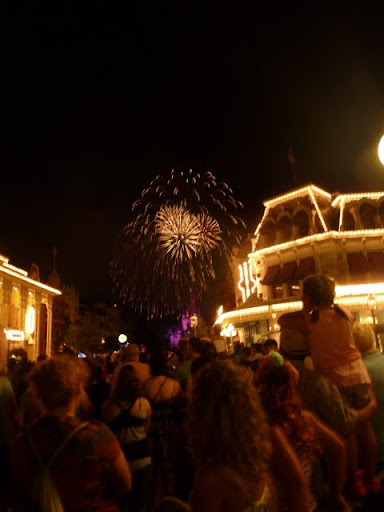 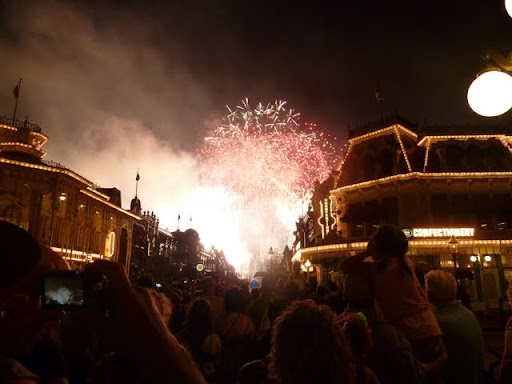 As we leave the park,   I am thinking that on our usual 2 week holiday this would be our last visit.   It doesn’t feel like we have been here very long,  and yet,  it feels like forever.  I am looking forward to a relaxing week at the beach and cruising,  but thats because I haven’t seen the weather reports yet.