We are all very tired and with nowhere to go, we aren’t keen to wake up too early.  By the time everyone is up, dressed and we are packed it’s nearly 11 o’clock.   In some ways I felt like we were wasting our final morning,  but we didn’t have anywhere to go and we weren’t going to get to sleep tonight so I could see no point in waking everyone and rushing as out of the hotel.

We did manage to pack everything into the 4 big cases, and a couple of carryon bags,   and we head out of Disneyworld and up the Osceola to Mimi’s cafe.   This is a lovely place.  It’s a similar sort of menu to Denny’s or Perkins,  but it’s just so much nicer inside,   it feels like a nice cafe rather than a cheap diner.

We had pancakes, sausage, eggs,   a really typical American breakfast. 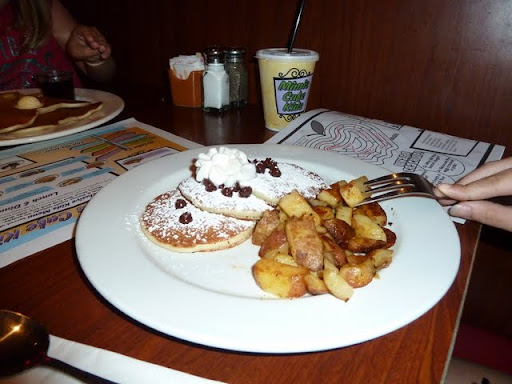 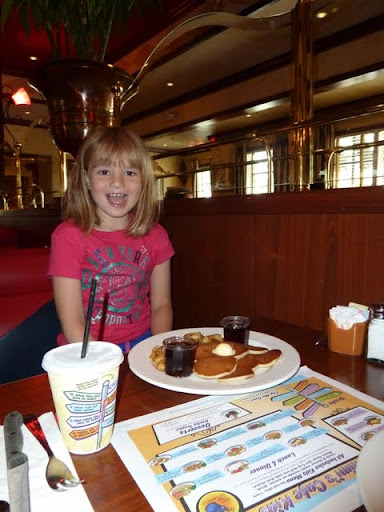 After our late breakfast,  we pop into the Loop and buy a few supplies for Molly’s birthday party.  It’s her birthday on Saturday and she’s having a Harry Potter party the weekend after school starts.   Michaels have all their Halloween stuff out, so we get some suitable bits and pieces for the party.

Shopping complete, and it’s off to the airport, return the car,  and wait in the queue.  Quite boring but has to be done.   The Check In staff are extremely thorough and even weigh our handluggage which is over weight,  so I jiggle it around to that it is acceptable.   Our main luggage is fine,  3 bags are under weight and one is slightly over,  so that is allowed.

Through security and into the lounge and I have a Dibb whilst we wait.  At the last minute I decide to do a little duty free shopping and buy some makeup.  Whist I am waiting to pay they start to board the plane,   so I finish my shopping and we are straight on the plane.  No hanging around at all really.

The flight is fairly non-eventful.   The food is ok,  the movies are dreadful (I watched Arthur and Paul,   both passed an hour or two but I thought they were both terrible) and eventually we were in Glasgow.  The flight only took 7 1/2 hours due to the wind,  which meant we got back quite early and we didn’t really have time to go to sleep.    The biggest event on the flight was that Molly finally lost her tooth,  she’s had a wobbly tooth since before we left England and it’s been threatening to fall out the whole time but was stubbornly hanging on.   We finally managed to wobble it out somewhere over the Atlantic.

We had used Skypark and arranged for them to return the car to us at the terminal,  which was great.  We just had to walk outside and it was waiting right there,  and it was clean!  A fairly painless 3 hour drive home,  and that was it,  holiday over…..

Our ‘official’ plan is to go every other year, but we really all want to go back next year,   and we do have some DVC points available,  so it’s not out of the question,  but it’s going to depend on some very reasonably priced flights popping up somewhere.    We shall just have to wait and see.