We are here!
Air France.    I can’t fault them,  both flights were excellent.  They left on time,   the planes were very nice.   The Plane from Paris to Orlando was particularly excellent.   We had plenty of leg room,   arm rests that moved completely out of the way,  so we had a large 4 seat space.  Fantastic entertainment system,  loads of movies to choose from.  The food was good.    I was very impressed.

Transfer in CDG was easy, and the terminal where we had to wait was very night and bright.   4 hours hanging around is still a long time to wait anywhere though.

Our room in Coronado Springs is lovely.   It seems bigger than I expected,  and it has a very nice feel about it.   We are in the Casita’s area, and have a lovely view out over the lake.  Not too far from both the Dig pool and the small pool.     I thought I’d requested a Cabana’s room,  but I’m very happy with this one.

Really, until we landed I thought we would only have one low, the very very long day,

but we had a couple of awful hours in Orlando Airport.

Immigration took forever,   we landed at the same time as a Virgin flight,  and the immigration hall was packed and the line moved very very slowly.

We got our bags quickly, and decided to go directly to the garage and try our luck with our Dollar Express card.    One of the  handles came off the case on the way there,   so I was carrying a very heavy bag through the airport.   Dollar were fine, and we quickly chose a bright blue SUV.   Then we spent at least 10 minutes trying to work out how to move the seat forwards.      Just as we had that worked out, we realised we’d lost Phil’s driving licence,    and it took us ages to find that.   It had fallen into the drivers footwell.    By the time we left the airport,   we’d been in Florida 2 hours,  and we were all very stressed and tired.

There seems to be a lot of Brazilian boys staying in our hotel.  We saw loads of them in the restaurant last night.  They are 11-12ish,  and just boys.   So far, it’s not really a low as they were ok and didn’t disturb us too much,   so we will see how that pans out. 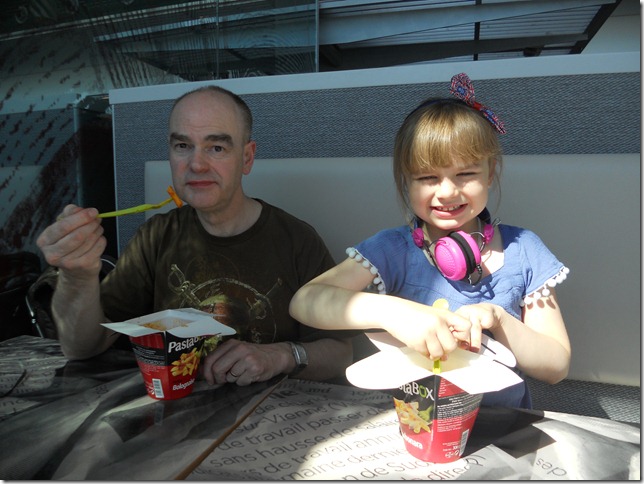 rather expensive microwaved pasta in the airport. (It was tasty but not cheap)

somewhere across the Atlantic

4 thoughts on “From Newcastle to Paris and onto Orlando”