When we arrived yesterday,  the check-in desk put us in a room in the Ranchos.   Before our trip, I’d read up and decided I really liked the Cabana’s,   the Casita’s looked very nice, but I really didn’t want to be in Ranchos.   As soon as I saw the room my heart sank,  but I explained to the lovely lady that I didn’t want to be there, and she made a call and we ended up in a beautiful room in Casitas.

The building is absolutely beautiful with courtyards with fountains in,  it just looks stunning.  Our room is lovely,  very attractive and loads of storage (which I had been a bit worried about).    There is a nice desk with desk chair,  unfortunately,  the desk is a little high or the chair is a little low.  I might need to sit on a pillow!

We are all wide awake quite early, and we are up and at the bus stop by 7:30.   We have a few false starts,  a forgotten hat,  some sunglasses etc , but we are eventually on the bus and on our way to Magic Kingdom.

When we arrive, we are engulfed in a sea of yellow t-shirts.

There are lots of tour groups here at the moment,  but this is the biggest we’ve seen, 100s of kids all following leaders with bright yellow ‘flags’.

I’d got the opening time wrong,  so we had a little while to wait before we could get in the park,  but we saw the rope drop ceremony and then we were in.

In what has become a bit of a tradition,  we ensued the race for the big rides,  and we headed straight for It’s a Small World. 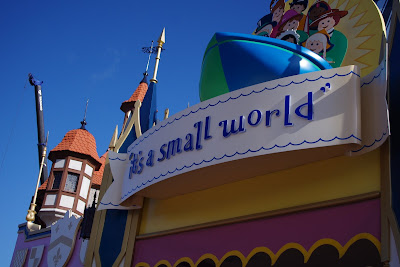 There is only one other family on this ride,  and we are sat right behind them, with empty boats before us and after us.  It was a little odd,  as I felt like we were intruding on their conversation as it was so quiet.    I had a little play with my new camera,  but I didn’t really manage to capture the ride very well.  I think it’s going to take me a while to get the best of it.

After It’s a Small World,  we head around to Haunted Mansion.  Katie has never ridden it,  but Phil and I think we might be able to convince her.  It turns out we are wrong

Molly and Phil ride it, whilst Katie and I wait outside.   We have fastpasses for Peter Pan,  so we have a quick ride,  and then we head into Mickey’s Philharmagic.   I am really tired,  so I have a quick snooze whilst we are ‘watching’ the show.

At the exit to Mickey’s Philharmagic,  they have fastpass machines for Dumbo,   so we grab some fastpasses, and walk down to the new area.   There isn’t much open yet,  but what is open looks really good.    We have a ride on the Great goofini,   and then our fastpasses for Dumbo are up.  This is the first time I’ve wished we were in the normal line,  as the inside of the tent looks quite interesting,  but we are straight through and don’t have time to check it out.

By this time it’s really hot,   so Molly decides to go in the water park and get a little wet.    This water area is fab,   and she is quickly soaked.    She’s not bothered though  and says she will dry off soon.

With a wet drippy Molly,  we hop aboard the train and head around to Splash Mountain.   We’ve not seen to many crowds so far today,  apparently they are all at Splash Mountain!  As we get off,  the park is heaving.  You can hardly walk,   the queue for Splash is well over an hour,  so we get some fastpasses,  but they aren’t for a few hours.   We have a quick discussion and decided that since Pirates rarely has a queue we will go there.    Pirates has a bit of a queue, certainly longer than I’ve ever seen before,  but it’s not too long, and it’s nice and cool while you are waiting.

I have another attempt at some photos,  but I haven’t really got the hang of the inside/dark rides just yet.

We are all fairly hot and bothered now,  so we head over to the Plaza restaurant.   We are on Quick Service dining plan,  but I quite like this place so we’d made an ADR for a first day treat.  It’s just sandwiches and burgers,  but it’s nice and calm inside,  and it’s a welcome break from the heat and crowds.

Whilst we are waiting for our food,  we hear from Dave & Bev who have arrived in MK,   and then from Katie’s friend Frances.   We make some plans to meet Frances at DTD in the evening,  and I spot Dave & Bev out of the restaurant window,   so we have a quick catch up and agree to meet them in tomorrowland after lunch.

Lunch is very nice,  and it’s not expensive (by Disney Standards, not by real world standards).  We have paid more for a counter service lunch before.

After lunch, we walk around to Tomorrowland.  We tried to text Dave and Bev, but we don’t get a reply,  so we decided to hop on the PeopleMover and see if we spot them.  We spot them just as we set off,   they are just getting off the PeopleMover,   so we wave frantically and they spot us.   They are waiting for us when we get off,   and we catch up for a few minutes.      We grab some fast passes for Toy Story, and then decide on Carousel of Progress,.    This is FULL.     I’ll just repeat that,  it was FULL.  I’ve never seen more than a handful of people in here,  and we are quite often the only people on the ride!   It’s very busy today.      After our ride (snooze?),  it’s time for the fastpass.   There is actually a queue to get in the fastpass queue,  and a man with a flag indicating where the end of the queue is.   Fortunately,  with the fastpass we don’t have to queue very long  and we are quickly on the ride .  I am rubbish as usual,  but James manages to score 999,999.   We check out the ride photos at the end, and Phil is hilarious,   he looks deadly serious as if he is really saving the world.   I’m to cheap to pay for the photo,  so you;’ll have to trust me,  it was a good one!

We stop for a drink, and I have a coffee float .  These are one of my new favourite treats,  I discovered them last year and really like them.

We can’t decided what to do next,  and think we might walk around to Pirates as the queue wasn’t too bad early,  and it’s a cool queuing area.   It takes us quite a while to get

there , and we have to negotiate the parade route which is extremely busy.  When we get there,  the queue is showing at over an hour,  so we decide against that.  Tiki Rooms is nearby and there is a show starting,  so we go in there,  and then we decide it’s time to head out,  the park is just to crowded and it’s stopped being fun.

We catch a bus back to Coronado,  and decide to cool down in the pool.

After our swim,  we get dressed and drive around to Downtown Disney.   We have some  dinner at Wolfgang Puck Express,    all of us trying not to eat too much as we are meeting Katie’s friend at Ghiradelli’s for dessert.

and we all managed to save some room for ice cream.

We met up with Frances and her family at Ghirardelli;s,  and had a lovely evening chatting with them whilst the girls went off and did a spot of shopping.  Molly did some pin-trading.

Eventually we had to call it a night as we were all extremely tired,  and we made it back to the room and all collapsed into bed.   All plans for tomorrow are cancelled and we are officially having a lazy day!