Katie’s friend from school is over in Orlando this week,  so we arranged to meet up with her and her family at Animal Kingdom.   We actually have to set an alarm to get us there for rope drop,  so the jetlag seems to be over now.   We do manage to get up, and out on time, and meet up with Francis and her family just before the park opens.

We decided to start with the Safari,  and there is only a 10 minute queue,  so we are quite happy to wait in that. It goes quite quickly and we are off on a Safari.  This has changed a bit since the last time we did it,  the story with the poachers is gone, and it’s just a straightforward look at the animals.   I’m quite happy with that,  I didn’t really think the story was necessary.

After our safari,  I suggested we visit Kusafiri and have a coffee and a cinnamon roll.  Once upon a time, these were the best cinnamon roll’s I’d ever tasted,  but they are nowhere near as nice anymore.   I have a feeling I thought the same last year,  so I will have to remember not to bother next time.

After our breakfast, we walk around to Kali River Rapids and pick up some fastpasses,  then whilst we are waiting we take a walk around the Maharajah Jungle Trek.

There animals all seem to be asleep,  so I don’t get many good photos.

We leave Trish holding the bags ,  and head off onto Kali River Rapids.  They reckon that some people get wet, and others get soaked.   I have always come off soaked and today is no exception.

The kids escaped fairly lightly, but Wayne, Phil and I were drenched.    I’ve brought a change of clothes,  but I’m the only person who decides to get changed.  It’s quite refreshing to be wet,  but I can’t walk around all day in wet pants.

The girls run over and get fastpasses for Everest,  and then we walk around the Paganini trail.

Katie wants to find this bench,  so we can recreate this photo.   Unfortunately,  neither of us can remember exactly what the bench looks like,  or where it is… 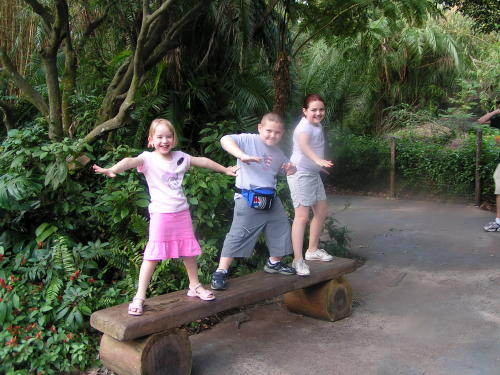 I don’t think I’ll ever be a wildlife photographer,  I prefer photographing the kids,  but I have a go at shooting the animals on the trail.   I quite like this bird.

After our walk,  it’s time for Everest,  so we go over there.  This time I’m the bag holder.  I’ve done Everest but I don’t usually feel so good afterwards,  so I decided to give it a miss.   Everyone was back really quickly,   and declared it brilliant.  Even Katie who isn’t always too sure about the bigger rides.

We decide we are ready for some lunch,   so we send the girls off for Primeval Whirl  fastpasses, and then we go to the Yak and Yeti for lunch.    This is a favourite of mine,  although I do wish there was somewhere inside to sit and eat.

We shared a couple of meals as the kids meals aren’t all that great,   we had some Beef Lo Mein,  Sweet and Sour chicken and a Spring roll.

I didn’t photograph the food,  so here are the girls instead.

After lunch,  we walk around to Dinoland,  I really don’t like this area.  so we don’t usually come in here.  Which means the kids have never ridden Primeval Whirl,  or Dinosaur.   They love Primeval Whirl,  and go straight back on (the adults sat it out, so we had plenty of fastpasses).

We walk over to get some fastpasses for Dinosaur whilst the girls are riding,  but someone gives us some that they can’t use,  so we are able to ride Dinosaur straight away which was great luck. Katie’s never ridden this, and I can tell she’s not keen but she’s not going to say no when we are there with her friend.

I’d ridden it once before, but it was many years ago and I couldn’t really remember much.  It’s not the greatest ride,  but it was ok.  It’s a bit rough, but as Molly said,   I hardly think the plastic dinosaurs are going to eat us!

It’s nearly time for the parade,  so we stake out a spot in front of a shop,  so we can catch a draft of air conditioning!  It’s getting really hot and we are tired,   so I just plonk myself on a bench and don’t even take any photos of the parade.   Phil and Molly take quite a few.

After the parade we head out of the park,  it’s been a really good day with not too many crowds,  but it was really hot.  It’s often said that Animal Kingdom is the hottest park, and it definitely felt it today.

We say goodbye to Francis, Trish and Wayne.    We have really enjoyed our day with them.

We make it back to our car and our room,  and collapse  on the end and noone moves for a few hours.   Then Molly decides she wants to swim.  Phil stupidly agreed to take her swimming ‘every day’, before we came over here,   so he is conned into taking her to the pool for an hour.

After they swim,   we take a walk around to the Pepper Market.  We decide to walk via the Rancho’s and the Cabana’s to see what they look like.

We spot this guy checking out the trash,  he’s not remotely scared of us and just gets on with his dinner.

This is the rancho’s area,    it was actually prettier than I’d expected,  although I do prefer the Casita’s where we are staying.

These are the Cabana’s

and the Casita’s, where we are

We have dinner in the Pepper Market,  the kids have spaghetti,  Phil has a steak, and I have fajitas.

and then take a look around the shop.  Molly is after a ‘baby Dumbo’ toy,  and she’s been doing a lot of pin-trading so am thinking about buying her some pins,  but we don’t buy anything today.

We walk back around the lake to the room,  and watch some Olympics coverage on the tv.   They are showing the men’s swimming relay, and the women’s gymnastics.  The coverage is obviously very pro-USA,  but neither team do as well as they had hoped/expected , so I was a little amused.  At one point when they were showing the US gymnasts,  they vaguely mentioned there was a British girl also performing at the same time, but we didn’t get to see her or find out how she had done.