So, after our lazy day,   normal service has been resumed.  It’s Tuesday,  which means we are now officially in our ‘bonus’ week.

We get up fairly early,  and are at the entrance to Epcot for just after 9.   We can walk to the International Gateway,  so we get to walk through an empty UK and Canadian pavilion to get to Future World.

Our first stop is Soarin’,  this ride has stupidly long lines at all times,  and we want to ride but we don’t want to wait.  Molly runs ahead and gets 4 fastpasses for 10:30, and by the time we get to the ride, the standby line says 25 minutes.   We decide we can do 25 minutes so we get in line.  Within a few minutes of joining the line, there is an announcement to say the back of the line will take 55 minutes.   We have a quick debate but decide it doesn’t look like a 55 minute line and we will take our chances.    The line is pretty much moving the entire time, and it is maybe 15 minutes until we get to the boarding area,   it certainly wasn’t a bad wait.

After the ride,   we head out of the land and decide what to do next.  Molly really wants to meet the characters and we haven’t really met any of them yet,   so we go to the Character Spot.   The line says 45 minutes, but we decide to just wait so that she can see them.

They have old Donald Duck cartoons playing while you are waiting,  so it’s not too painful a wait,  but it is a reasonably long wait.  The queue is full of kids and they are all waiting very patiently.

At least when you do finally get to the front of the queue, you get to meet lots of character without any more waiting.  We met Mickey, Minnie, Pluto, Donald and Goofy.     They all have their traditional costumes on,  but they are stood in front of these awful busy backgrounds.   The scrapbooker in me, would like them in front of a nice plain colour! 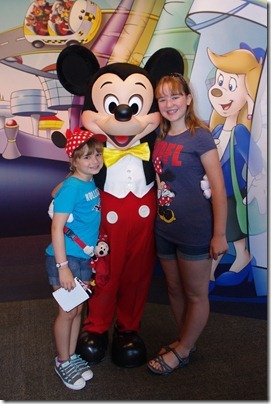 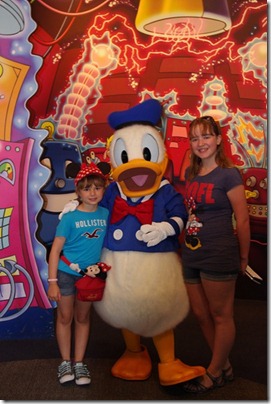 After meeting the characters,  our fastpass for Soarin’ was available,   so we went back to the Land and had another ride.  This time we walked straight on.   I like this ride,  but I wouldn’t wait very long for it,  it’s not that exciting.

It was about 11ish now, and we were getting peckish, so we stopped in Season’s and had a snack and a coffee.  This is when you realise how much the snack credits were saving you!  We had 4 drinks and 4 cakes and it was something like $30.

After our snack,  we walked over to MouseGears,   I had a 20% coupon to use before noon,   but to be honest,  I really didn’t want anything.

It was starting to get hot and busy now,  so we decided to catch the boat back to the Boardwalk, and come back later.

We had a little rest,  and then I decided we needed to do some shopping.    So,  we drove down the 192 to SuperTarget.      It wasn’t our intention to drive down the 192,  but the less said about Phil’s navigational abilities, the better…..   Anyway,  we found SuperTarget and in the carpark there was a Denny’s,  so we had some lunch and availed ourselves of the free wifi.  Many silly photos of Molly were taken but this is my favourite

After lunch,  we went to Target where I tried to buy some sudafed.  I haven’t been ID’d for alcohol (although to be fair, I’m not sure I’ve had any) but I had to show it for sudafed and it took ages to buy,  the computer said No.

We also picked up a Batmobile, and some curtains for Molly’s room amongst other things.

My next stop was Joann,   they have great bargains in here but it’s so hard to get anything when the kids are bored, or asking me if they can buy some felt sticker junk while I am trying to decide.   I ended up getting a Tim Holtz rosette die that I’ve been coveting, and quite a cute alphabet die that was $5.  For $5 I think I’d have bought it even if it wasn’t cute!

I fancy trying some quilting,  so I bought a big cutting mat and a ruler.  I had a 40% off coupon on my phone, and they were quite happy to accept it from my phone, and then didn’t bat an eye when I handed the phone to Phil so he could buy the ruler separately and also get 40% of that as well.

We were done shopping now,  so we stopped at KrispyKreme for some donuts and then returned to the Boardwalk for a few hours chilling.  Molly and Phil tried to go swimming but the heaven’s opened as they got to the pool, so they had to get out.

We got ourselves turned around, and went down to meet Dave & Bev for 8pm so we could go into Epcot and watch Illuminations.    It wasn’t a long walk to Epcot,  but it was absolute chaos trying to get through the bag check  I don’t know why they were surprised people would be coming to the park for the fireworks, but there was only one person on, and she was very slow.

We were eventually allowed in,  and I attempted to snag my favourite spot in the UK, but someone had beaten me to it.  We ended up with quite a good view from the UK terrace though. 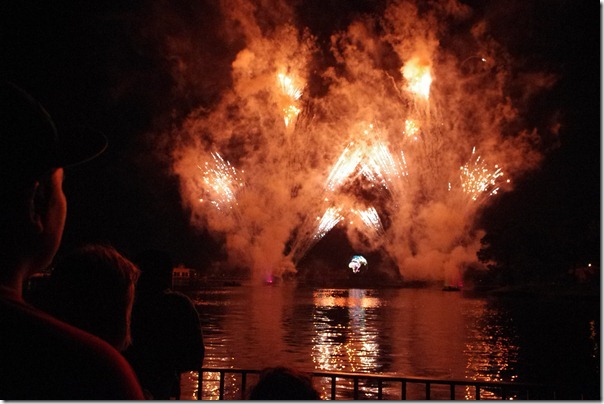 This is a spectacular show, but we’ve been watching it for 10 years now, and I’m ready for a new one.   I suppose it could be argued that we visit too often,  but I think a new show every 10 years isn’t too much to ask.

As the fireworks end,  we hung around the UK pavilion for a little while waiting for the crowds to disappear.

I was wanting to take some photos of the countries all lit up,  however,  I hadn’t brought a tripod.   Quite an intentional decision since it was heavy and I wouldn’t get much use out of it,  but on this evening I would have liked it.   Instead,  I did a tour of Epcot via trashcan.  Not to be outdone, the kids undertook a survey of water fountains.   This kept the occupied all evening,  they tried each water fountain and offered a rating on coldness of water and strength of stream.  I kid you not,   this little activity may excite your family as well.

So,  we headed around the World Showcase, starting in France and ending in Mexico.  The kids checked out the water fountain, and I swore at the poor placement of the bins, and the sheer number of people still in the park.  It was supposed to be quiet and empty but it was heaving. 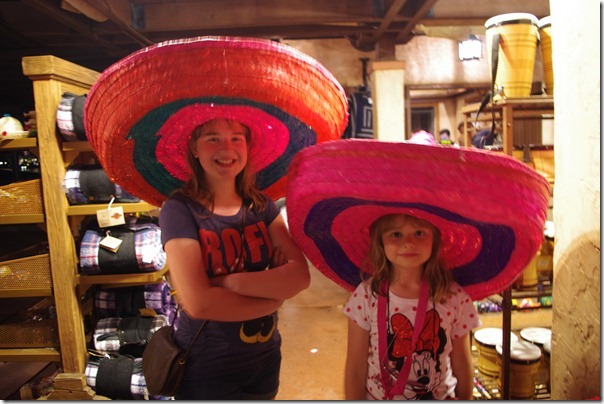 Once we reached Mexico, we walked over to see the wait time for Soarin’,  it was showing 75 minutes which is crazy for 11pm at night.  We decided to do Spaceship Earth instead,  you can always count on Dame Judi for a short queue!

After Spaceship Earth,  Soarin’ had gone up to over 90 minutes so we had to give up on that plan,  and we decided to walk back around the countries.   This was really cool,  the park was empting out and it was very quiet.   We had a ride in Mexico,  and visited the Troll in Norway and then we just strolled through a completely empty park 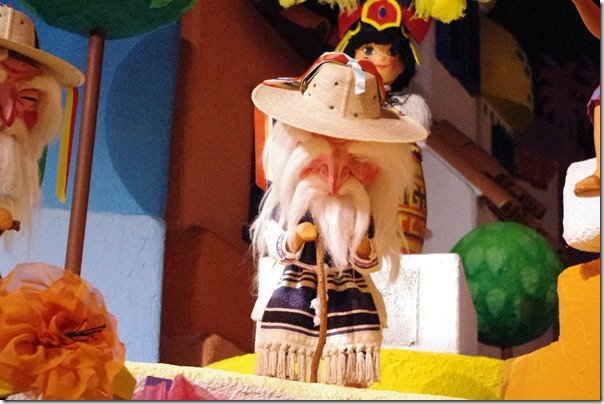 We spotted Miss Quinn on the Mexico ride.

and James fought the Vikings. 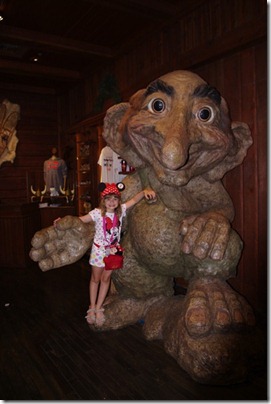 James spotted this vantage point,  taken from the wall around the lake.

Moll’s trying to hold the world in her hand.