So the plan for today is to go to Kennedy Space Centre.   We had a really late night at Epcot,  and we are all slept quite late.   Even once we are up and dressed we are moving very slowly.  Eventually I suggest that we skip Kennedy today, and reschedule it for tomorrow.   There doesn’t seem a lot of point in driving over there if we aren’t going to get there until after lunchtime.

We decide to try the Fantasia Mini Golf,   that’s one of those things that’s been on the list for a few years but never actually been achieved.

We have to wait a little while at the Mini golf, but then we are off and playing.   It’s quite a fun course, with water that squirts and things that move as you play.

We aren’t the best golfers but we do ok, and it’s quite a pleasant experience,  if a little hot.  I think maybe playing at noon wasn’t our smartest move! 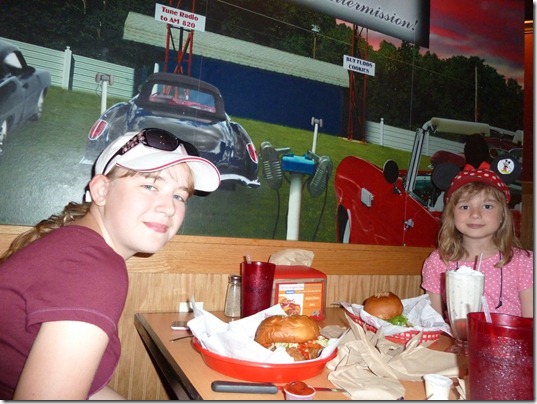 After lunch,  we headed up into Orlando to the ice rink,  the traffic on the I4 was awful and I really didn’t enjoy the drive at all.  It was quite a stressful journey to be honest.

We did make it to the rink,  and got Katie booked in on the ‘freestyle’ session.  We had a language issue,  I kept asking for the ‘figure skating’ session,   and he was trying to put her on the public session,  eventually I realised the magic phrase was ‘freestyle’.

Katie skated but Molly decided she would prefer to just watch.  I think she found it a little intimidating being on a strange rink.  Katie was having a good skate , when they announced that all skaters had to clear the ice.   I had assumed we’d paid for an hour,  but it turned out to be a 45 minute session.     I have been known to moan about Whitley Bay,  but the sessions are much longer and cheaper than this.

After the skating,   we drive back down the I4 (still scary), and we get off at Sand Lake Road and pull into Whole Foods to get some tea.  This is a really upmarket organic supermarket, and they have lots of ready made food to take out.   We ended up getting a pot of chili and some frozen rice.

It’s after 5 when we get back to the Boardwak,   we want to get up early tomorrow,  so we decide on a relaxed evening in the room.  The kids rent Princess Diaries, and Princess Diaries 2.  I went and did battle with the laundry room.  I went over to the Inn this time, but it wasn’t really any better over there.    The poor laundry facilities are really disappointing,  as the ones we used in Coronado were superb.

So, it’s a relaxed evening of chili and rice in front of the telly.