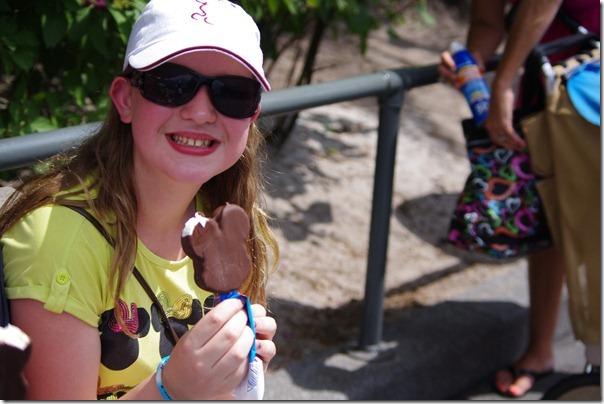 Today is our last full day,   I think we are all feeling sad to go home but fairly content that we have done most of the things we wanted to do.   However,   there we haven’t seen any of the shows in MGM so we decide that will be our aim for today.

We sleep quite late after our late night,  and Molly in particular is definitely not planning on waking up,   so Phil and Katie go down to the pool and I start packing while they are swimming.  Eventually Molly wakes up and joins in the swimming.     I manage to get us 90% packed,  and we seem to have plenty of space left for the ‘bits and pieces’ so I’m not too worried about the packing.

After the swimming,   we get ready and walk along to MGM.   Of course,  we set out on our walk right around noon,  so this wasn’t the smartest plan,    and by the time we get there we are all hot and ready for a drink and a meal.

I’d had Starring Rolls on my list of places to try,  so we went there first,  but when we had a look we didn’t fancy anything and the seating was outside so we decided against it.   I did notice an interesting lunch option though,  they had a box with brie, grapes, crackers and chocolate covered strawberries.  Unfortunately,  I don’t really eat fruit so it didn’t work for me,  but I thought it was one of the more interesting lunch options I’ve seen.  Especially for those trying to avoid burgers on the dining plan.

Instead of Starring Rolls,  we went to ABC Commissary,   which won purely on the basis of being inside and having air conditioning.

While we ate, we consulted the times guide and made a plan for the afternoon.   We couldn’t manage all the shows,   so we had to decide between Lights, motors action or Beauty and the Beast,  and Belle won.  We’ve seen them both many times before,   so missing one wasn’t a disaster.

Our first show was Indiana Jones,    we got there quite late,  but we still got pretty good seats.   I’ve seen this show quite a few times, but it still makes me jump in places. 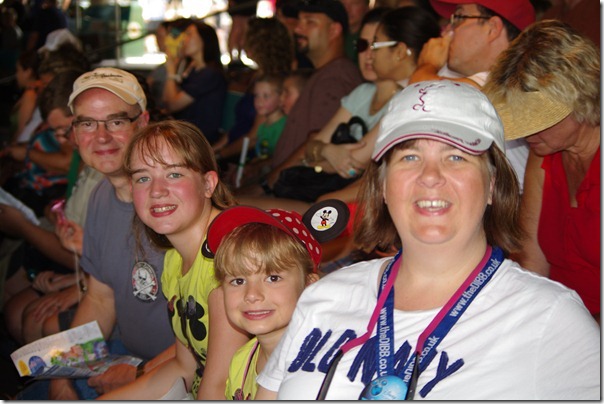 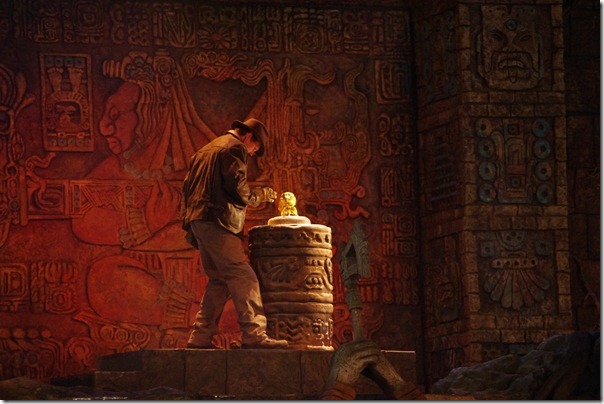 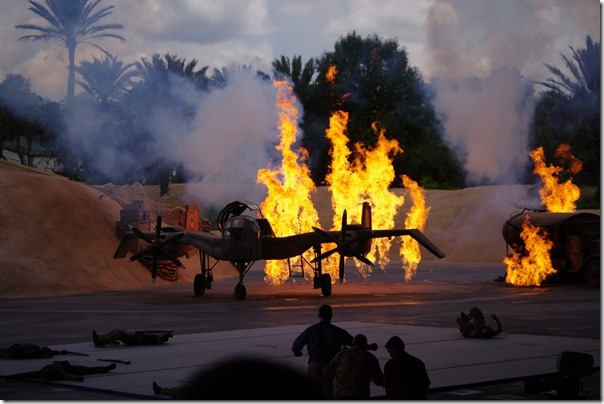 As we come out of Indiana Jones,   two women in front of us spot each other, and a huge Geordie reunion is had.  It was quite entertaining, and I wondered if we should join in.

Next on our list is the parade,  and we walk around to the main street and find a spot on the pavement ,  but our spot is in full sun and it’s too uncomfortable to sit there.   We decide to walk back along the parade route in search of a more shady spot.   We get nearly to the end of the route,  and we haven’t found anywhere good,  and I’m starting to regret moving,   when a cast member tells us the path we are on is closing shortly for the parade.  There is an empty bench on the path and I ask if we can sit there, and she says we can,    so we end up with front rows seats to the parade.  It wasn’t shady but it couldn’t have been a better spot.  Somewhere to sit,  and very few people on our side of the road, so we got loads of attention from the performers.

While we are waiting,  Phil went off to get some ice creams,   and by the time he came back our seats were in a restricted area.   I didn’t think they were going to let him back in at all,  but eventually with a supervisors approval he was allowed to rejoin us.  good thing too or the Mickey Bars would have melted!

Our seats were so good, that I didn’t really need the zoom lens on the camera, but since I was eating a mickey bar I wasn’t about to try and change the lens,   so a lot of photos are extreme closeups! 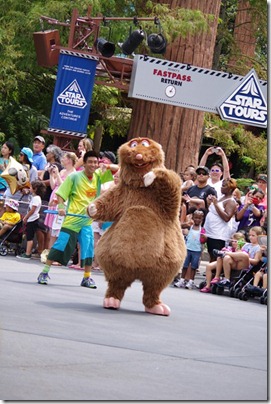 It’s a good fun parade,  and since we were right at the start we saw it all straight away and then we were able to escape from the heat.

The next thing on our list was Beauty and the Beast at 4pm,   it was only 3:10 when the parade passed us by,   so we had a little time to kill.  We considered doing the backlot tour, and started to walk over there,  but I realised on the way that even if there was no queue, we’d be pushing it to get in,  through the pre-show and around the tour by 4 o’clock.     We were stood just outside ‘One Man’s Dream’,  as I realised there,   so we decided to take a look in there.   It looked like it was about to rain,  so I think a lot of other people made a similar choice./

We’ve never been in here before and it was really interesting,  and much bigger than I was expecting.      I thought this ‘undressed’ animatronic of Pres. Lincoln was interesting.

This is the control panel to operate him 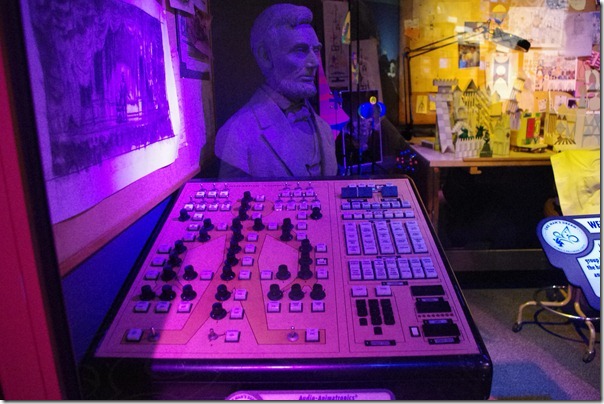 The exhibit ends with a 15 minute movie,  which I was quite interested to see,  but Beauty and the Beast was due to start shortly so we had to walk through the movie (in true ‘Norway’ style).  When we got outside it was raining quite heavily,  so we put on our ponchos and plodged on.

We got to Beauty and the Beast just as it was about to start.   There was a full thunder and lightening storm going on outside, and I did wonder how sturdy the theatre was,  but it’s been there for a few years, so I decided it had survived plenty of thunderstorms.

Just as the show started,  a guy in front of us put up his iPad to record the show.   I can’t really understand carrying an iPad around all day,  they are quite unwieldy to use as your camera/video.   That wasn’t the problem here though,  the issue was as soon as he held up his iPad he completely blocked the view of the people behind us.   Fortunately,  when he was asked to move it,  he did quite quickly. 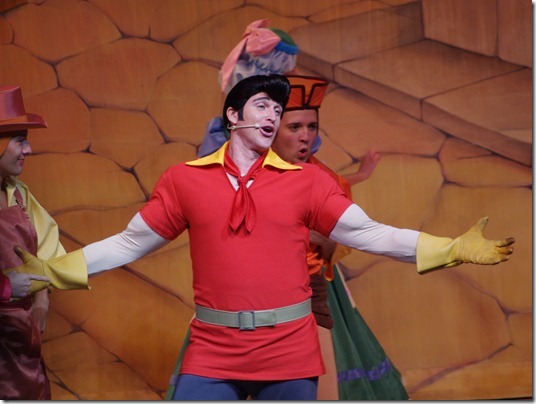 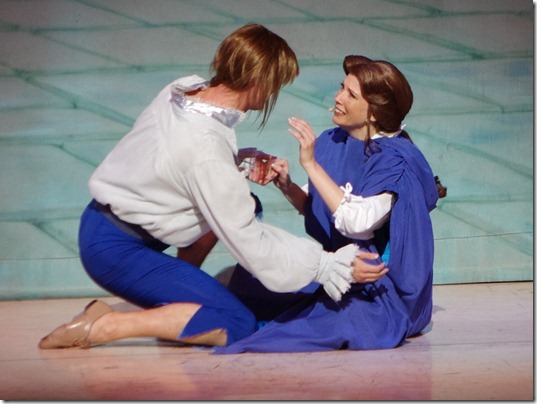 After Beauty and the Beast the rain had slowed down quite a lot,    although it was still poncho weather.    Our final show of the day was American Idol.    We went directly there,  and while we were waiting to go in they came out and did a bit of a pre-show, recording some footage of the crowd chanting for one of the singers.

The show is really good,   it’s extremely cheesy but they do a good job of recreating the hype/atmosphere of the real show.    I got the strong feeling the winner had been pre-selected.  He was, not too surprisingly, the same guy we’d been asked to chant for outside.

He was pretty good but I couldn’t get past the feeling it had been fixed.

One of the things they mentioned quite a few times was that in the last season of American Idol,  half of the contestants had originally been found through the theme park version of the show.  Makes you realise the stakes for a ‘theme park game’ are actually quite high.

After the show,  we headed out of the park and caught the boat back to the Boardwalk.    We were heading out to dinner with Dave & Bev at Applebees.  We tried a different branch this time,   along the 192 towards the 27.   It was very good,  I preferred it to the one on the 535 that we tried last year.

Our starters all came out quite quickly,  but when it came to the mains we got half of them but there were 3 dishes missing for ages.   The poor waiter was clearly not to blame,  and he was desperately trying to find out what had happened.    They ended up having to completely remake one of the dishes , so it was a good 15 minutes after everyone else had eaten. 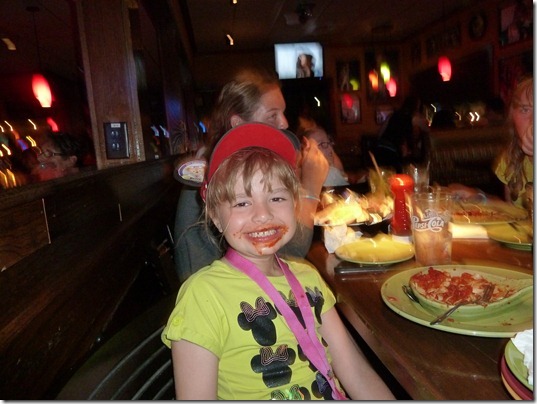 Periodically throughout the meal,  the manager wandered past and asked us if everything was alright,   so we mentioned that we’d had a long delay for the meal.   He looked really surprised that we had said something other than ‘fine’, and muttered something about the restaurant being busy (which wasn’t the issue).    It really annoyed me.   What is the point of him wandering around asking if everything is ok,  if when it isn’t,  he is just going to mutter something irrelevant and disappear without actually doing anything about it.

It didn’t really mar a good evening,  it just grated a bit.

After dinner,  we came back to the Boardwalk.    We weren’t quite ready for the holiday to end,   so we went outside on the balcony and sat for a while.  Eventually we had to say goodnight,  and we headed up in the elevator.    Molly held it together until everyone had left,  but as we got to the room she started to cry.   She didn’t want to say goodbye to everyone.