Tuesday started out much like any other day,  Phil had to work, we had skating,   then I  finished off the packing and tidied the house for about the 20th time.   The kids had a small skirmish over a duvet cover.   pretty much a normal day.

Eventually, Phil finished work,  and we were all packed and on our way.  Unlike another clever blogger,  I’ve never managed a photo at the door,  we are always desperate to leave and I never think of taking the photos until it’s too late.

We were all quite nervous about the passports and they were checked repeatedly.  As we were getting in the car,   we had to stop and check them again, even though we had just checked a few minutes before.

Traffic to Manchester was very heavy,  but we didn’t have to stop.   I was pleased Phil was driving as I wouldn’t have enjoyed it.     Halfway there I was really panicking about the passports again,  I nearly asked Phil to pull over so I could check the bags again.  I was wishing I’d had them in my bumbag so I could just keep looking at them every few minutes

The trip was mostly uneventful except Katie had forgotten her headphones,   she was having a bit of a huff as she can’t manage without headphones in.   Mid huff she realised that molly had been quietly offering her the use of her headphones (red and white minnie mouse style,  not quite Katie’s thing)   but Katie accepted and peace reigned again.

we made good time and could soon see the Bewleys,  unfortunately we couldn’t work out how to get into the carpark and ended up in departures,   we went around the block a bit and eventually found the entrance. As we got out of the car, Katie discovered the headphones had been in the car all along….

All checked in,   and with a lovely room,     we decided on the bar for tea.   It was pretty busy but we managed to get a table and were served very quickly.   Two chicken burgers,  a chicken salad, and a kids chicken dinner,  came to almost 50pounds, so not the cheapest option but it was very nice and very convenient so we were happy, and hey, we are on holiday!

We were all awake very early the next morning,  just like that Disney advert,  noone could sleep as we were too excited

We got a shuttle bus over to the Terminal, and found the Delta desk.  we were actually so early the desk hadn’t opened yet,  so we had a short wait but it wasn’t too bad.   while we were waiting to check in the family directly in front of us were pulled from the queue and taken to the direct Virgin flight.    We were seconds away from being that family,   but sadly it wasn’t our lucky day. I was quite jealous.  We got ourselves checked in,   and headed up to security.

The lines here looked horrendous,  but actually it moved pretty quickly and we were through in about 20 minutes.

Once in Duty Free, we decided on a Frankie and Bennys breakfast to get us in the holiday mood.   We had bagels, pancakes, french toast,   a real american style breakfast.

After breakfast we found the gate, and were soon on board.  I have to say here,  that you can fly cheaply to Orlando (sometimes),  or conveniently,  but generally not both.   We had sacrificed a bit of convenience to save some money,  and we all knew that,  so whilst I would have rather been on a direct flight from newcastle,   we knew the score when we booked.

Saying that,  the flight to Atlanta was excellent.  Superb IFE,  good legroom,   the food was good and there was lots of it,   so it really was no hardship.  There were loads of movies to choose from,  at least 100 possibly more.   I watched Catch Me if you can,  Saving Mr Banks,  Budapest Hotel (that was a strange movie….).

We had a choice of Thai Curry Chicken or Tortellini and they were both lovely.   We also had a sandwich and ice cream before landing, and a snack in the middle of the flight.

When we arrived in Atlanta,  we followed the signs to immigration and were greeted with a wonderful sight,   a completely empty immigration hall.   We were directed to use some computerised booths to scan our passports.  Unfortunately,   we struggled with these,  it didn’t like our photographs, and eventually we had to go and see an actual person.  in hindsight I think we should have taken our glasses off.  even seeing a real person was fairly painless,  although he wasn’t particularly cheerful but we were soon in the country,  bags collected,  a quick walk through customs and then bags dropped off again.

We had to go through security again to get in to the main part of the terminal,  there was  abit of a queue for this,  but nothing to bad.

We took a monorail to Terminal B and got settled in at Gate 7,   we all had a snack and then noticed the Gate no longer showed Orlando (it had when we sat down),  a quick check and we were off to gate 21,   sat there for a while but Orlando never appeared on the screen,  so went off to ask,   and we were at our 3rd gate,   gate 26. 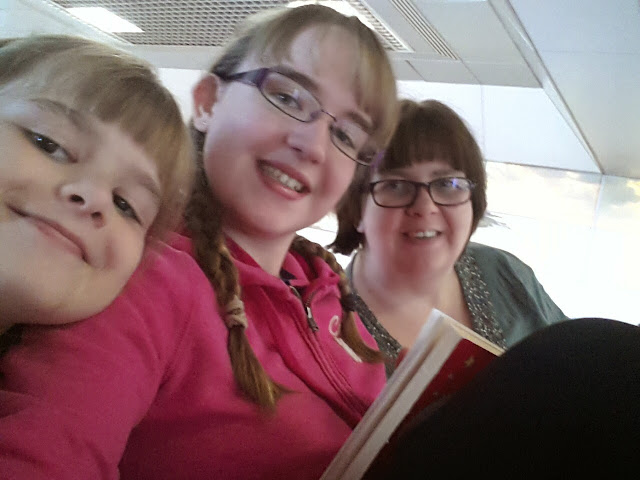 After all the musical chairs ,  we boarded,  it was a much smaller plane,    but still fine and we had a drink and some pretzels and were quickly landing in Orlando.

We landed at 6.30 and didn’t have to go through Immigration,   so were very quickly collecting our suitcases,  and thinking that this indirect route was excellent and we would be in the pool by 8pm.

We found the Hertz desk, and there was a short queue,   really nothing that worried us at all.   It looked like 8 or 10 families, and there were 5 desks open.   So we waited , and we waited,  and we waited .  The queue just never moved,.  Each time a customer made it to the desk,  they were there at least 20 minutes,   The family in front of us got fed up and went to a different company to get a car, but we were on a prepaid voucher so we had no choice but to wait (or so we thought).

Eventually it was our turn,  and we must have been next in line for a good 20 minutes, when a customer finished,  and as we headed to the desk the girl said she was closing her desk and going home,.  that was 8pm,   the end of her shift.       Back to the front of the line,  and then another customer was brought in and told to go in front of us.   I presume a gold card holder .  I don’t know,   I had had enough at this point.     We did eventually see a clerk on the desk, and I said I don’t want any upgrades please,   I just want to get the car and go.   To be fair,  he didn’t offer us any upgrades,and was relatively quick (although I don’t understand why it takes so long)

We went over to the gararge and found our car.   It was a Fiat 500.   we have been to Orlando 10 times, and usually opt for a Compact car,  this time I had booked Economy,  not realising the difference.   if we hadn’t been so tired it would have been hilarious.   We only had 2 cases,  but we couldn’t even get one case in the boot,   the back was so curved that it just wasn’t going to close over any suitcase.    I wasn’t going back to wait in the line,  but did manage to find a staff member in the carpark,  she wasn’t massively helpful and informed me the Fiat 500 was an ‘upgrade’ from what I had booked,  but that we could take a  Chevy Spark instead.   This is a similar size to Phil’s Panda,  but with I think a smaller boot.   we could at least get one suitcase in the boot.     The kdis were tired, and Molly was very stressed,   she doesn’t cope well when things go wrong and worries a lot.    So,  that wasn’t helping my mood at all.    I decided I would take the other case and get a cab,  then Phil realised that if I wasn’t in the car he could get the other case in.    And I remembered about the magical express bus (a free bus between the airport and disneyworld),   I just wish I’d remembered about it 2 hours ago and we’d have left with out the car and sorted it out later.

Phil set off with the girls, and I went down to find the bus.   You are supposed to prebook so I wasn’t sure if I could use it,  but Disney being Disney welcomed me with open arms.   I really could have cried when a friendly face said Sure , hop on board

Then I remembered Phil’s navigational abilities and wondered if I would ever see them again,   but Katie stepped in as co-pilot and they arrived at Animal Kingdom Lodge just fine.   I was only a few minutes behind them.   By the time we met up again,  they were all much happier ,  they had checked in and received the magic bands which they thought were very cool, and were waiting for me before they found the room.

We went up and found our room,  which is very nice,     and then headed down for a swim.   Only the pool was closed,  due to a thunderstorm.  I really thought this might finish Molly off,  but she was absolutely fine which was a relief.

So after a very long day,  we collapsed into bed.     It hadn’t been the best of evenings, but we are here now and tomorrow we have a date with Mickey.