We had an early start today, as we had breakfast booked at Cafe Mickey’s for 8am.  By some miracle,  we made it to Cafe Mickey’s for almost exactly 8am.   It was a character breakfast, and we met Dale (we spotted Chip but never quite managed to meet him),   Goofy, Pluto and Mickey (twice!).   The characters were good fun,  Dale messed up Molly’s headband,  and had a joke with her.  The food was ok,  certainly not the most impressive buffet I’ve ever had, but we weren’t really there for the food. 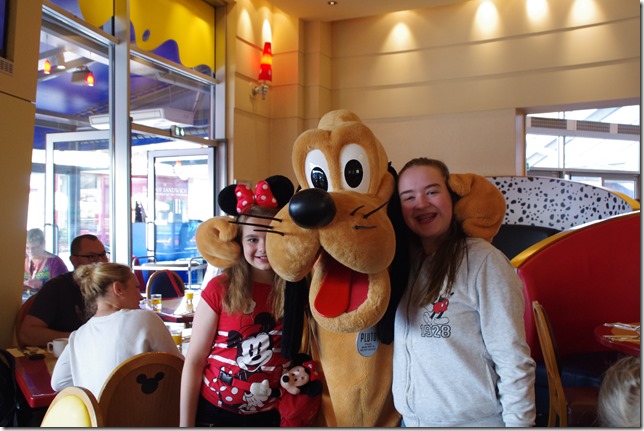 After breakfast we walked down to the studios.  We wanted to ride Crush’s coaster,  and all the advice is to arrive early to avoid the long queues.  So we got to the gate’s about half an hour before they opened,     we picked a queue, and it was of course, the wrong queue.   The people directly in front of us had a print-out for a ticket and it wouldn’t scan.  They were there ages trying to sort it out, while we saw 100s of people streaming into the park and into the queue for Crush’s coaster in front of us…

It was all worth it though because we only had to wait 20 minutes in the actual queue for the coaster……. I’m sure there is some logic in that,  but I don’t know what it is.

The coaster was pretty cool,   the loading area looked like a dockside,  and you were loaded into the turtle shells.   These are probably the smallest ride cars I’ve ever encountered.  The seat was large enough, but there was very little leg room and it was very hard to get a bag by your feet.   Phil did manage with the camera bag, but then struggled to get it out.   They also didn’t stop the shells,  so it was all a bit quick getting yourself in and out. 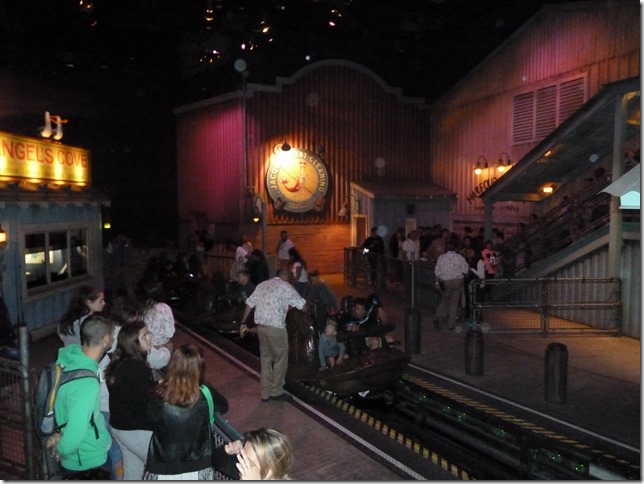 The ride itself is very good,   it starts off quite tame with some cute scenes, and I was thinking this is ok,  and then woosh, you are off on a very fast, spinny underwater adventure.    Just when I was thinking,  I’m not sure if I like this,  we were at the end,  so it was just about the right length.

I was pleased to ride it,  but I don’t think I will be riding it often,  whereas I want to ride Ratatoille again tomorrow and we’ve already done it twice. 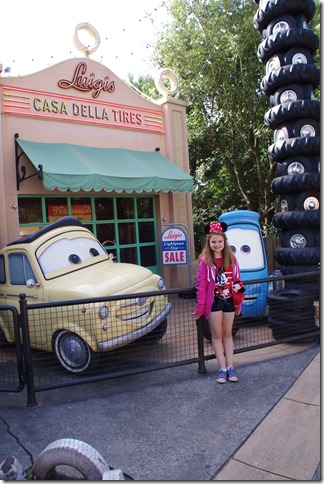 We had a little look at the cars scenes,  and then headed into the Art of Animation.   I’ve done this before in Florida,  but we usually skip the movie in Florida,   so I’m not sure if it’s exactly the same.  They had some headphones to translate the show into English (or about 5 other languages).  At the end they had some desks where you could draw,  but there weren’t very many so the kids drew and Phil and I just watched.

Just before we left,  the Incredibles appeared on these cool space vehicles.

We had done what we wanted to do in the Studios, so we left and headed to the Disneyland Park.    As we entered the park,  we saw Mary Poppins and Bert,  (not forgetting Mr Penguin).   The girls waited in a queue to meet them,    It was a bit slow because they were taking quite a bit of time to talk to everyone while they did the pictures which slows down the queue but is nicer when your turn does come around.

We decided to go to Discoveryland and get a fastpass for Buzz Lightyear.  After we’d collected it,  we noticed that Space Mountain was only a 15 minute queue.   Phil and I didn’t fancy it, so the girls went off to ride alone.  They were both a little apprehensive,  as they like Space Mountain in Orlando but the Paris version is a bigger coaster.   I was a bit worried that one would wimp out and leave the other alone, but I think because they were together they both held their nerve.

They were very pleased with themselves when they got off.

It was 1.30 by now, and we wanted something to eat,  but not too much as we had a buffet dinner booked for later.   We couldn’t really decide what to have,  Molly wanted a salad,  I ended up with a wrap, and Phil and Katie shared a hot dog and some nuggets.   I bought my wrap from the Market St Deli,  and we found an old fashioned phone that when you answer it,  you can hear everyone on the party line.

While we were sitting outside eating our lunch,  we could hear someone in the buildings apparently having a shower.   It’s all these little bits that amuse me,  and add to the atmosphere in the park.

After lunch,  we walked under the castle and looked for the dragon.

We realised our Buzz Lightyear fastpass time was approaching, so it was back into Discoveryland and onto Buzz.  To be honest,  most of the queue for Buzz is after the fastpass point,  so I don’t think you save a great deal of time.    As we were queuing,   I was thinking my camera was heavy, and went to move it to my other hand.  I suddenly realised that my camera strap had some off my camera.  It attaches to the bottom of my camera using a large screw,  and the screw had come loose and fallen out.   Fortunately,  I always keep my hand on the camera as I don’t really trust the strap,      so the camera was fine,  but there was no sign of the screw.   I was a bit fed up as I wasn’t sure how I’d make it through the next few days without a strap.

I put the camera in the bag and we rode Buzz.   When we came out,   I went around to the entrance and explained that a part of my camera strap had fallen off.  It’s such a strange thing to explain as it’s just a screw but it’s a very specific one.   She let me back into the queue to look,  but I had to push past people to try and look.  I am sure they all thought I was cutting the line.    I didn’t go to far, when there was a cast member and he asked me what I was doing.  I told him I’d lost part of my camera, and he opened his hand,  and he’d found it.  He said he didn’t know what it was but he’d just seen it and thought it looked important.   I was very relieved!  But the camera strap is now going to have to be replaced as I really can’t trust it.

Camera crisis resolved,   we popped into the Hyperion to use the loo,   we could see all the little kids dressed up as Jedi’s ready for a show,    but we didn’t stop and watch.

After our pit stop,   it was 3 o’clock,   so we had to have an ice-cream.  We have these vouchers that can only be used between 3 and 6 and since we were eating at 6,  we wanted to have the ice cream as early as possible.  We all had mini magnums,  and they were very nice. 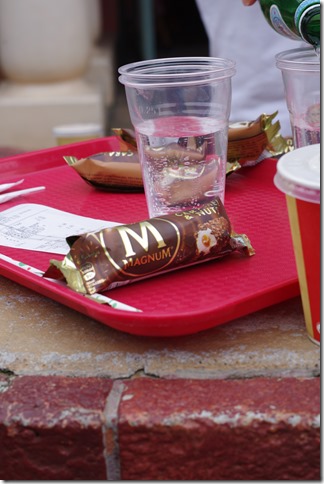 Next up,  that really big thrill ride,  the Storybook Boats.    We wanted to do this,  even though it’s quite a small ride,  as we’d never seen it before.   It’s quite cute, with these little scenes set around a river.

There is also a cute train in this area, but it had a 45 minute queue and it definitely isn’t worth a 45 minute wait.

We came out of the Storybook area,  and I just really wanted to sit down, and possibly sleep.  A bit like this guy. 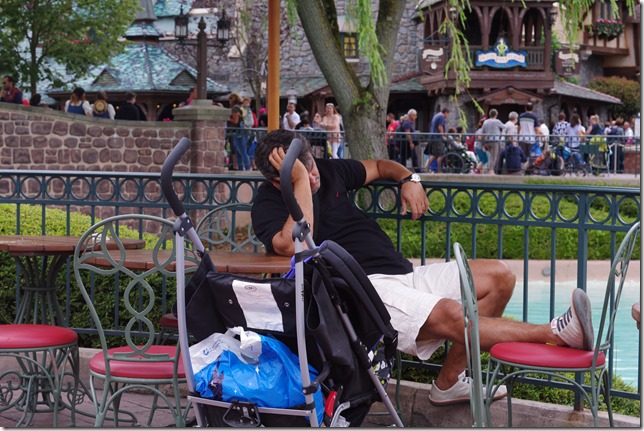 First, we walked through Alice’s Labyrinth,

and then I went for a sit down while everyone else did the Carousel.

After my rest,  I was up for a ride on Pirates,  so we walked around there and enjoyed the Yo Ho Ho, of the Pirates Life,   and then it was time for the Parade.   Molly borrowed my camera and took a few 100 photos of the parade,   which I shall spare you, but here are one or two.

This oen made me laugh, what has happened to Anna? 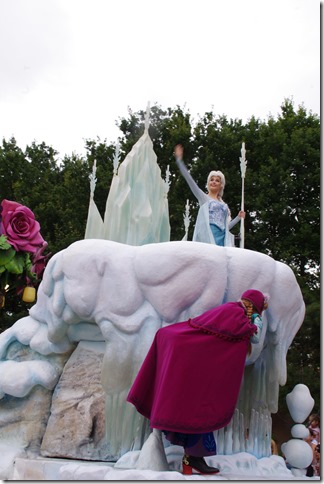 After the parade it was time for tea,  I was quite looking forward to this,  we had a buffet booked at the Agrabah cafe,   this is themed for the Arabian markets, and was lots of little rooms.   I kept getting lost finding my way between our table and the buffet.  The restaurant looked amazing and the food was realy good,    I ate far too much but I wanted to try everything as it all looked so nice.

This was just the starters 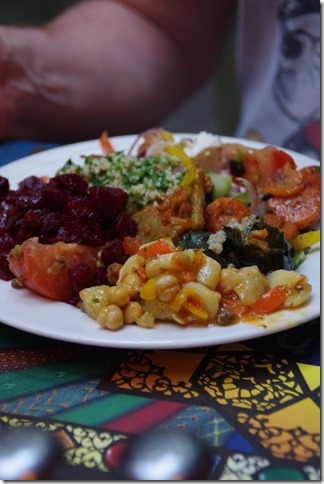 I forgot to take the main courses but there was rice and couscous, plus lamb, chicken, kebab meet, potatoes and lots of other things.  I did take a picture of dessert, M 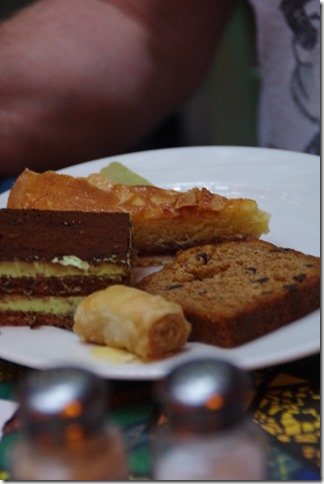 After dinner,  we had a quick walk through the Aladdin ‘Enchanted Passage’, which had little scenes from Aladdin,  Phil described it as Fenwick’s window, and that was pretty close.

It was half past seven,  and we all wanted to see Dreams but that wasn’t on until 11pm,   so we had to admit defeat and head home,  We walked out through the shops.  The girls both have money to spend but they can’t decide what to buy.

We caught the bus back to the hotel,  no security alerts tonight fortunatly,     and I just about crawled back to the room.  My feet were just so tired.

All 4 of us piled on the bed, and watch the Good Dinosaur on the ipad,  and then we had a little wander over to the lobby to access some Wifi so we could all catch up with the world and I could post yesterday’s trip report.

As we left the lobby we could hear Dreams,   we will definitely have to watch it tomorrow.