Today is the day I had picked for us to really hit Universal and specifically Harry Potter,  but we’d had such a good evening the night before that the pressure was off.    We had a lazy morning,  sometimes you have to just rest.   We had some muffins and cereal.   We had brought bagels and bread to toast,   but unfortunately we didn’t have a toaster,  so that didn’t work too well!

We decide to try the shuttle bus option to get to the park,    it will save us $20 and perhaps reduce a little directions based tension in the car!   As we leave the room, we notice it’s raining,  so we head back into the room and collect the ponchos.  This will prove to be a very good move!

There are buses all morning but we catch the final bus at 11:05am.   It’s pretty straightfoward and we must be the last stop as we go straight to the parks, where we are dropped off just outside CityWalk.  You have to go up into the security area, which is a bit chaotic and then you are into CityWalk and we head back to Universal again.

I’ve printed out a touring plan,   but we’ve never followed a touring plan and today was no different.   I like the idea of them but I can’t imagine we will ever actually use one properly.    The first stop on our touring plan is Men in Black,   so we head towards that first.  Just as we enter the Simpson’s area it starts to spit and then it quickly turns into a deluge,    the Simpson’s ride is nearby so we just run straight in.   We actually have no idea what it is,  although while we are queuing I realise that it used to be the Back to the Future ride many years ago,   so we have at least some idea of what we are queuing for.   The queue was pretty quick,   but loads of stairs.   We are seeing loads of stairs on all the rides.   At one point we have to queue on a set of stairs that go outside, but fortunately the worst of the rain has stopped by that point.    I don’t think we queued very long, maybe 10  minutes,   and then we were onto the ride.  Which is really good.    I’m  not a massive fan of the Simpsons but have seen enough to know the characters and it was just fun with some good 3d effects.

We leave the ride and Katie’s  not feeling too great.   The effects have made her feel a little queezy.  I was a bit worried that was going to be the end of the day for her,  but she nips into the loo and then we take a break in the Coke Hut.  We decide to buy a refillable cup,    I’m never sure if it’s a good idea or not,  but we seem to spend a lot on drinks,   so we buy the cup fo $15.99 and then we can refill it all day.  They have about 100 different flavours you can fill it with.  It doesn’t really bear thinking about….

After a drink and a rest,  she’s feeling better. 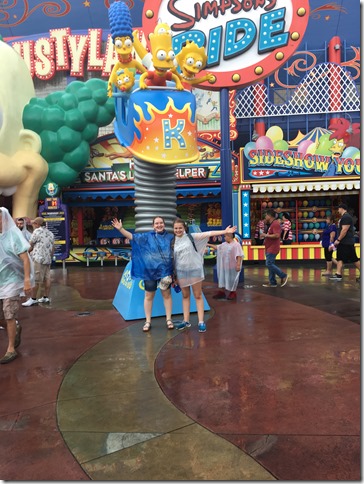 We go to Men in Black next.   This has the annoying locker situation outside.   We manage to find 2 lockers and get everything stowed away,    but I’m thinking what sort of ride is this??  I thought it was like Buzz Lightyear?    The queue shows 20 minutes but we pretty much walk straight on,  and it is pretty much like Buzz.    It was really good, and I won in our car,   so I was quite pleased with that result! 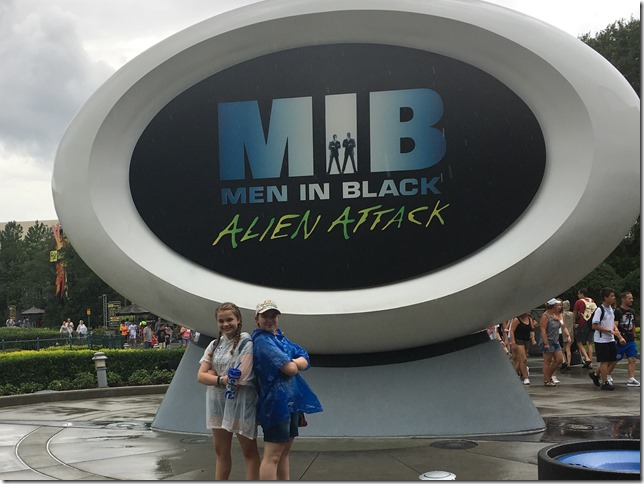 We retrieve our belongings,  and head back to Diagon Alley.    The weather is a bit damp but it’s not too bad.

First stop is the nightbus where we meet the conductor and the shrunked head.   He asks Katie where she is from and she says the UK,  The conductor replies,  well obviously we are in London!

There is a phone box near the Night Bus,  so Katie calls the Ministry of Magic,   they replied ‘they replied that the phone booth was closed for maintenance so we would have to use a different entrance’ 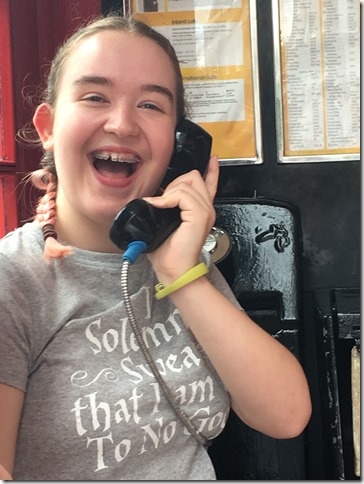 We just have a wander around,  Molly is using her wand to try all the spells.  At first she finds it tricky but pretty quickly she gets the hang of it.

I like looking in the windows,   self knitting needles anyone?

We had thought we would watch one of the shows,  but as the stage was so wet it was cancelled.     We spend quite a while just looking at everything,  This is one place where a tour would be good as there are so many details that I am sure I missed.   Id also like to get in after hours when it was empty so you could really see it without all the tourists in the way (of course we are also tourists in other peoples way).

Eventually we head back out into the real world, and inevitably thoughts turn to lunch.   We decide to get some pizza and find a table in Luigi’s.   We share a large pizza, some salad and use the refillable mug.

After lunch,  we have a fastpass for Jimmy Fallon’s ride through NYC.   This is the only ride in the park that you can get a free fastpass for,   They operate a virtual queuing system.   We have never seen the show,  although I know the Carson show from the 80s,   but it’s still quite cool to walk though NBC studios and watch the clips.  The ride is very similar to the Simpson’s ride,   I mean,  we aren’t in Krusty’s cartoonland,  we are in NYC but it’s essentially the same concept.

We come out of the ride,  and I think we are done.  We haven’t done a massive number of rides, but we’ve enjoyed our day,  stayed relatively dry and not had to queue to much.   Molly really wants to rid Rip Ride Rocket,  but there is no way I’m riding that, and Phil and Katie aren’t keen either.  She doesn’t want to ride alone,   so we pass up on that pleasure.

On the way out,  we pass the Despicable Me ride.    It was showing at 60 minutes,  but these timings tend to be high,    so being soft and feeling guilty about Rip Ride Rocket,    we decided to queue.    It was every minute of the published 60 minutes.    They have a cute film for you to watch while you wait but it’s only about 30 minutes long.  When you are watching it for the 2nd time it’s not so entertaining.   They should really make the ride entertainment films much longer.  Nothing says I’ve been in this line too long like watching the film for the third time….     Eventually,   we get into the ride,    and it’s exactly the same as the Simpsons and Jimmy Fallon.  The movie is funny,  but 3 3D simulator rides feels like too many.  Molly would have liked to have gone into Shrek,  which is much the same.    I think a bit of variety is needed here.

After the Despicable Me Ride,  we come out to torrential rain,  it was absolutely chucking it down.   We (by which I mean I),  had had enough,   so we headed back to the bus stop.   I had stayed relatively dry all day, but we were soaked.    We dripped our way back to the bus stop and waited for the bus.   We had a bit of a wait but there was a bench and I was at that point where I was already wet and it wasn’t going to make any difference if I got any wetter.

The bus took us back to our hotel,   the driver was quite the character  entertaining us before we set off,  and making sure everyone remembered to get off at the right hotel.      We discussed going out for a meal later on,  but once we got back to the room, we just hit the bed and put the telly us and decided to just snack instead.    Note – bagels warmed in the microwave are not very nice….

Katie was very excited to watch a new episode of Teen Wolf,   so we just watched the telly and relaxed.

One thought on “Day 6–a Universally wet day”