Today is the 3rd August, and it’s our 21st Wedding Anniversary. The girls have got us Let’s celebrate buttons, and Phil and I exchange cards. We have fast passes for Hollywood Studios later, but we start at the pool. We don’t seem to have been to the pool very often, so it’s quite nice to go down while it’s still a bit cooler and just relax. I put my Kindle in a waterproof case and tried reading it while sitting in the pool, but it wasn’t really very practical so I retreated to a sun lounger, with occasional dips into the water to cool off when it got too hot. Phil and Molly swam, and Katie did some art in the room.

There are worse ways to spend the morning. We had bought a little cool bag in Target the previous night, so I bring down some drinks and snacks.

Eventually, we drag ourselves away from the room and head up to get ready for the day. We walk along the path to Hollywood Studios, the location of our room means we are halfway there already.

We end up arriving at the park at 11:30. Now we have done this before, we know you should get there early, but it’s just not been happening, so its really no surprise that it’s quite hot and quite busy.

What is a surprise is just how much of the park has gone. I knew they had closed some areas for construction, but really it’s about 50% of the park.
Our first fastpass is Toy Story Mania, and it finishes at 12:05, so we go straight there. There is some sort of Star Wars show starting on the stage, but we mostly ignore it. It’s quite hard as the music is very loud and menacing. I can’t help but think that Pixar and Star Wars is a strange combination for one theme park, I’m really not sure how they are going to work together.
Even with FastPass we have a short wait for Toy Story, but it’s not too long. 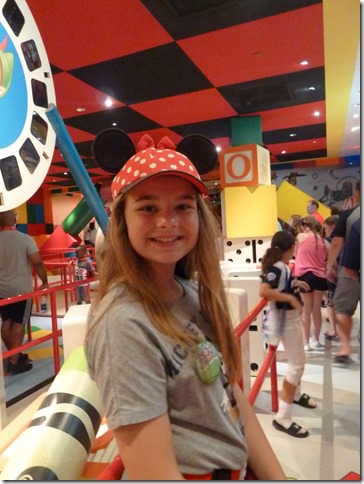 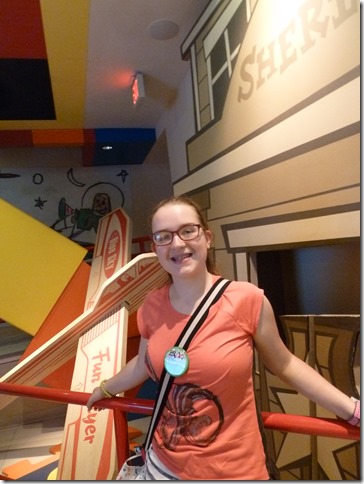 I come up with that I think is an excellent strategy, and only aim for things worth at least 1000 points. I do pretty well, but of course, Phil wins. I will win at one of these games eventually!
Just outside of the Great Movie Ride there is a Photopass phtoographer. We hadn’t got many photos at Magic Kingdom, so we decide to get one taken here. I don’t think this will be going in the album! 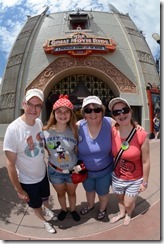 Our next FastPass is for Star Tours, so we start to walk over there, but we see Goofy on the way. The girls go and wait in the line, and Goofy takes a little break, so they have a short wait. While they are waiting, Katie decides to draw Goofy and then ask him to sign it. She drew this in the queue 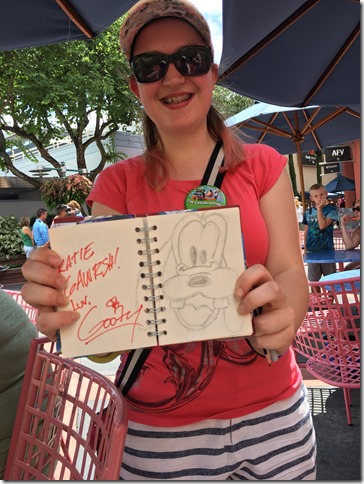 Just past Goofy, we see Chip n Dale with a very short line, so no time for a drawing, but we have a quick photo. I’m not very impressed with this one, I think the photographer could have moved so we were straight on, we all seem to be twisted a little. 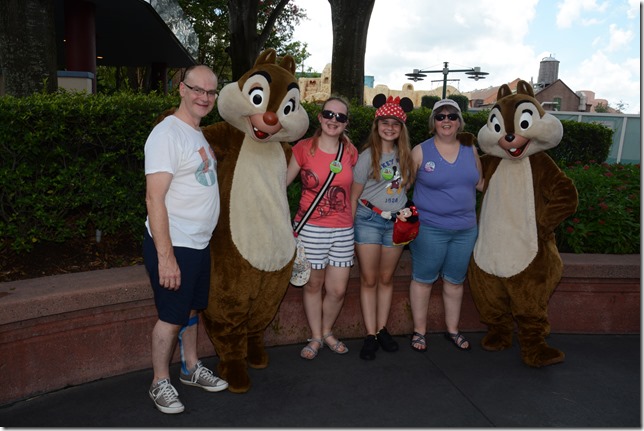 We are doing pretty well with meeting these characters, and Mickey and Minnie are next! They are housed in the back of the American Idol theatre, I think where the auditions used to take place. It’s a 20 minute wait, which isn’t too bad, and we still have a while for our fast pass, so we decide to wait, and Katie decides to draw again.

She manages both Minnie and Mickey while we are in the queue. Minnie was comparing Katie’s drawing with Molly’s bum bag – she was impressed. 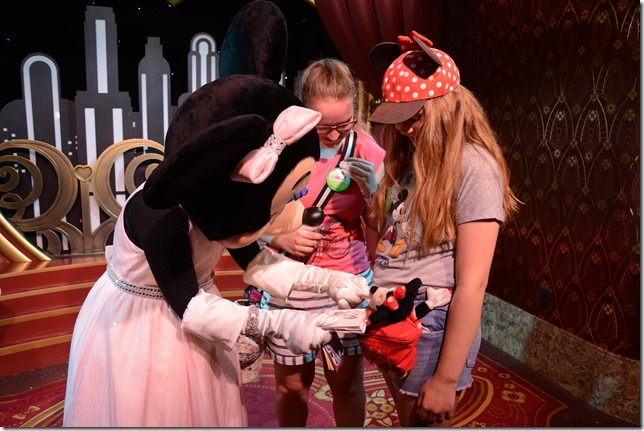 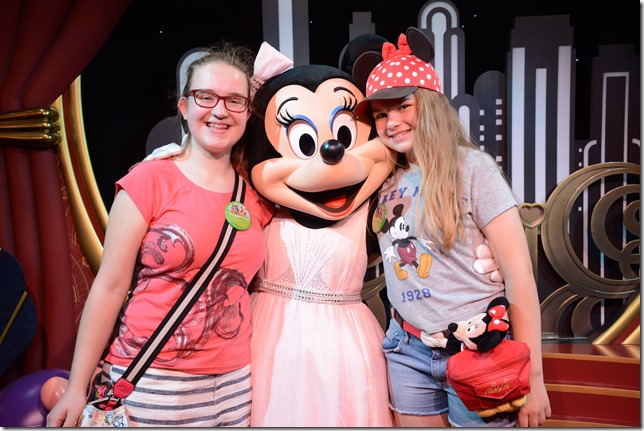 I think they have added lots of characters into the park as there is so little park left, we also saw Donald and Daisy, although we didn’t queue to meet them. But I am really not impressed with the photopass photographers. They would normally take some time to pose you a little and get a much nicer photo. Particularly of Minnie.
Mickey was just down the corridor, and the photographer remembered Katie from Goofy. She was telling Mickey, that Katie had also drawn Goofy in the queue.

After the character frenzy, it really is time for Star Tours, which is just around the corner. There is a 50 minute queue, but we have the fast pass so we wait about 5 minutes. It’s one of my favourite simulators, and we see a new story that I don’t remember before. Katie decides she doesn’t really like simulators, as she’s not feeling too great when she gets off. We think some lunch in the air conditioning might help, so walk down to ABC Commissary, but they have changed the menu and no-one fancies anything. We are a bit stumped as nearly everywhere else is outside, but we decide the Backlot Express might work as it’s covered with large fans. We walk over there, and discover there is an indoor area – I don’t know if that’s new or we missed it before? It doesn’t look new, so I think we’ve always just seen the outdoor section and walked past.

Molly and I have chicken and waffles, which are basically nice chicken nuggets and a waffle. Phil and Katie have a Caprese sandwich. We could probably have shared these meals, but it’s our wedding anniversary – you have to splash out occasionally! Actually, we all struggle to finish, and decide that we would have been fine sharing. It was quite busy but I manage to find a table near the back, however, it turned out to be near a heating vent (I don’t know if it was a/c related but it was pumping out hot air, not what we needed). There weren’t any other tables, so we moved around the table and left the seat nearest the hot air free.

The waffles have Darth Vadar on them!

We have one more fastpass left, and that’s for the Frozen sing-along. The girls roll their eyes, but there really wasn’t lot of choice as most of our favourites are in the same group, so once I’d picked Toy Story Mania, we were struggling for a third choice.
I wouldn’t usually fastpass something like this, and you certainly don’t need too. We got let in early and were allowed to wait outside the theatre on a covered ramp. The non fastpass people waited in a queue outside, but they all got in, and I’m sure the best plan is just to arrive right at show time and walk straight in with no waiting at all.
The show was actually pretty fun, they had 2 hosts who were quite amusing, and at the end they made it snow. 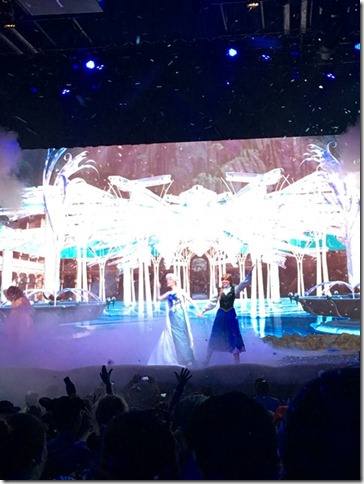 This is supposed to be a picture of it snowing, but you can’t really tell that….
I had checked in the theatre and we could have had a fourth fast pass for Great Movie ride at 4:30, which is in 2 hours, but there’s not much left that we want to do and we don’t want to wait 2 hours, so we decide we’re done for the day. We head out of the park, past the Storm Troupers, 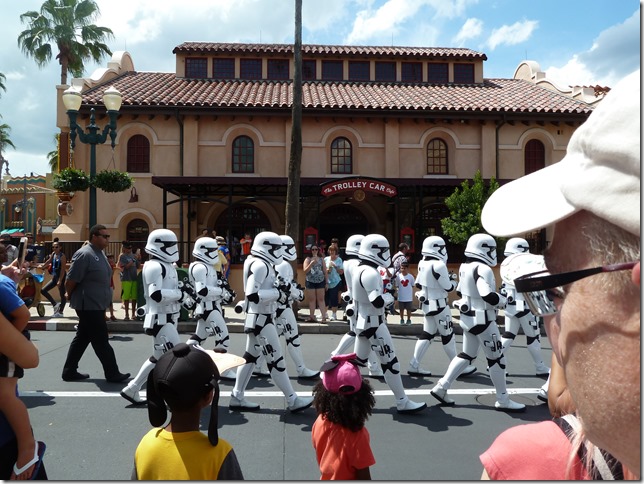 and via Starbucks. I had a Strawberry Acia, I think this is my new favourite. Everyone else has a Frappacino. The girls come with whipped cream, but Phil’s doesn’t. I’m not sure why.

We head out of the park, and just miss the boat back to the Boardwalk, so we decide to just sit on a bench with our drinks and wait for the next one.
We get on the next boat, and unusually for us, we take it all the way back to the Boardwalk (We often get off at the Swan/Dolphin and walk over the bridge). The girls go off to the shops, and Phil and I go to check our Magic Band bill. It takes ages to see someone, and then she doesn’t really seem very keen to take any money off of us, but we do manage to pay it off. We have brought travellers cheques for some of our spending money, so we are charging to the magic band and paying that off with the travellers cheques. The front desk at the hotel are quite happy to take them, but we aren’t trying to use them out in the real world.
Back up to our lovely room, we spend a few hours relaxing. Phil and Molly have a swim, I read my book, and I think Katie is drawing.
We eventually decide we want to eat, and I spot a deal at Olive Garden which looks perfect for us. You get a meal in the restaurant, and a second meal to take away for another night. It seems a bit random, but that’s the offer. Since we have a kitchen and are eating in some evenings, it seems like a good idea. 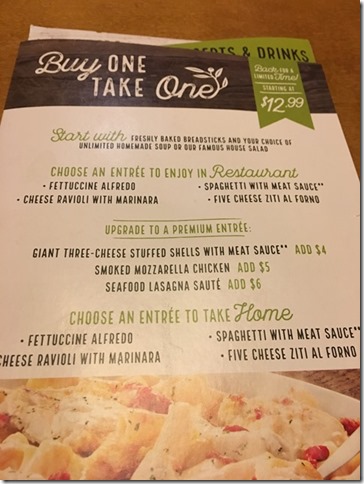 I have the 5 cheese Ziti which was lovely, but really big especially considering I had soup and breadsticks beforehand. The girls had spaghetti and Phil had Ravioli, and then we all chose a different meal to bring away.
This massive bowl of salad was for 2 people ! 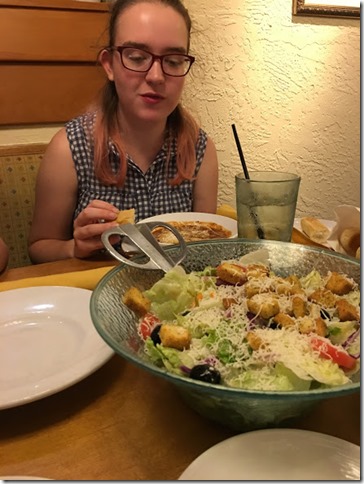 We had a nice meal, but we were too full for dessert, which was a shame as I had a coupon for a free dessert, so we decided to get it to go.
We got these 3 little desserts, and shared them with a coffee back in the room later.

When we got back to the room, I had a look at the takeaway meals. They are in plastic containers ready to microwave. I had assumed they would need to go in the oven, but these would work well if you were in a studio or hotel room with a microwave.