We have a bit of a lie in again today,   we have reached the point in the holiday where we would rather sleep in and go out late, than get up early.      We only have a few days left so we take a look at the plan and decide we want to shift a few things around.  I decide to cancel some Hollywood studios fast passes for next Monday,  and somehow end up cancelling one that I want for today.   Its for the Great Movie Ride which is closing down in a few weeks,  so I definitely want to ride it.  I have a bit of a panic,  but manage to rebook it for a bit earlier than we’d really wanted.   I was pleased at least to have it back.

We head down to the pool for a swim,   Katie and I read,  Molly and Phil swim.   I pop into the pool to cool down periodically. 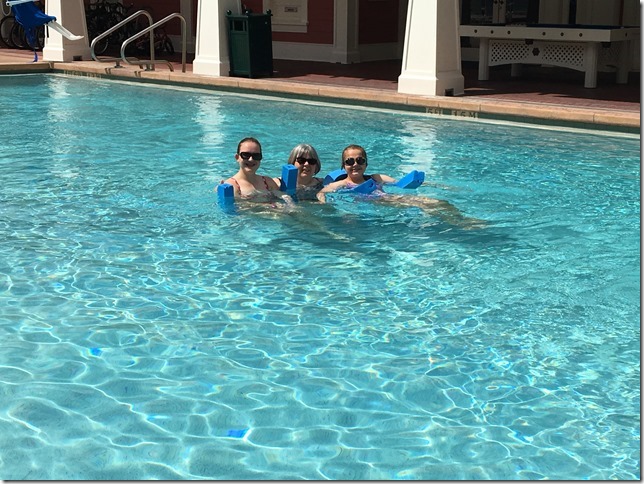 Molly enjoyed some M&Ms which had melted a little in the sun! 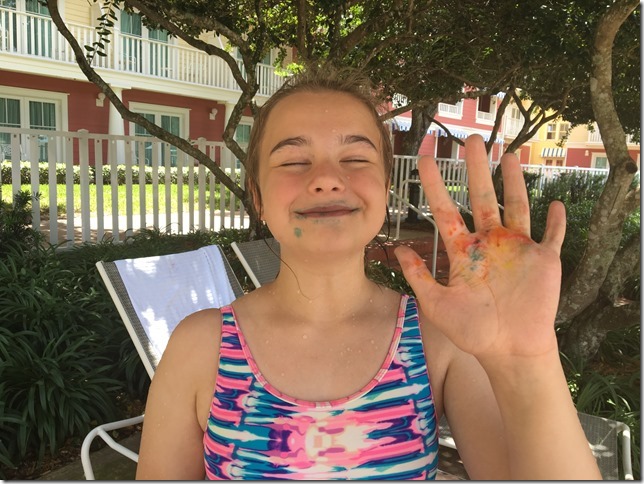 It was quite pleasant, and to be honest I’d have been quite happy to stay there all day.  There were very few other people using the quiet pool,   we had a shady spot with a table and loungers.   What’s not to like?

We dragged ourselves away to get changed and get the boat over to Hollywood Studios.   We got there about 3pm and our fastpass ran out at 3:40,   so we were doing ok timewise. 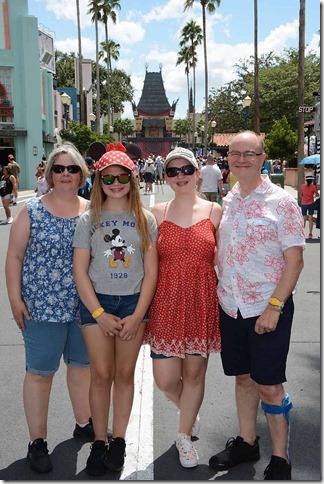 I wanted this fastpass for a very specific reason,   we have ridden the Great Movie Ride loads of times,  and we have never seen the Cowboy scene,  we have always had the Gangster.  In fact,  I wasn’t entirely convinced the cowboy scene was a real option,  I thought it was perhaps a myth.      The ride is closing soon,  so I was determined to see the Cowboy version.   We kept asking every CM if we could see the Cowboy,  and as we were boarding,  I mentioned it again,  and we were directed to a different car,   so if we hadn’t asked,  we would have had that Gangster again.   However!    We did indeed have the Cowboy this time.  Unfortunately,  the actor wasn’t brilliant but it was still exciting to see a different version of a ride we have done so many times. 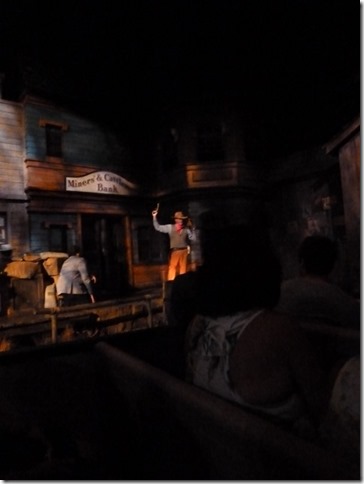 Oh no!  He’s blown up the bank 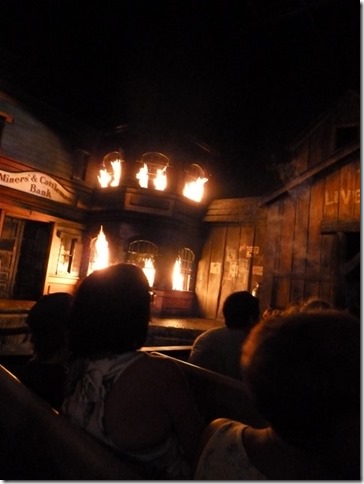 Its a cheesy old ride, but I am pleased we have now seen both versions,   and I hope they put something worthwhile in it’s place.

After the ride,  we walked around to Muppets 3D – this is one of those shows that you can count on seeing without a fastpass,  and we were straight in there again,  although the theatre was nearly full.  I think there is now so little left in Hollywood Studios that all the rides are busier.  It’s quite sad actually to see what is effectively half the park running.   We could see them dismantling the streets behind the Muppets theatre.   After Muppets 3D we were peckish,  so we got some Pizza.  They have changed Pizza Planet, and now it’s PizzaRizzo – to tie it with Muppets.  Which seems strange since the whole park is moving to Toy Story theming,  but I preferred the new PizzaRizzo,  it feels more like a restaurant and less like a warehouse.

We just shared a couple of small pizzas for a snack. 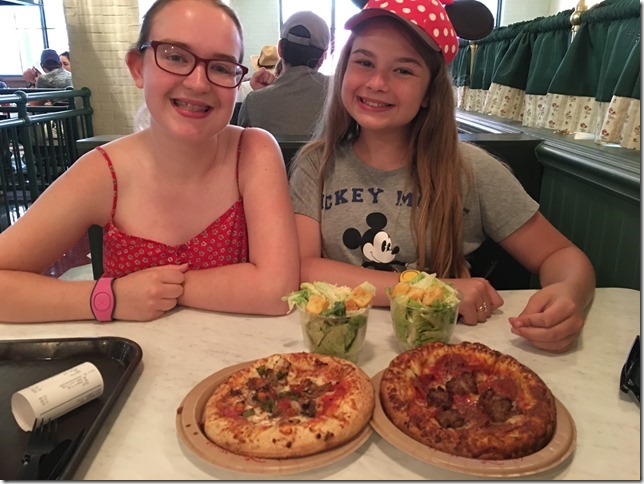 After our pizza, we had a short while before our Star Tours fastpass.  I like Star Tours but I probably wouldn’t fast pass it every time,  but there is seriously very little to use your fast pass on here.  Anything you actually need a fastpass for is in Tier 1,  so you can only have 1 of them,  and we’d used it for Great Movie Ride.   Group B has Tower of Terror, which we don’t ride,  and then a bunch of stuff that doesn’t need a fast pass so we end up with Star Tours every time. 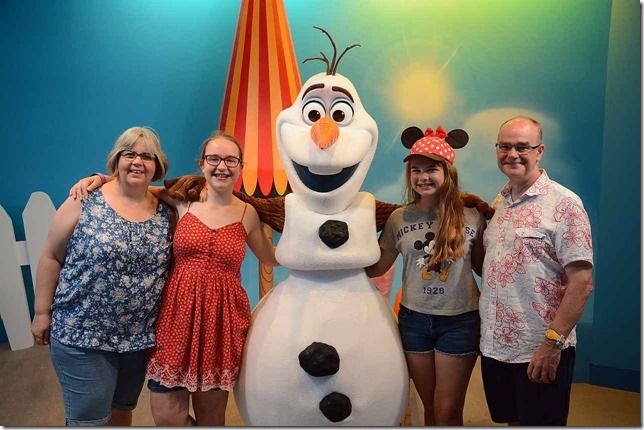 And then it’s straight into Star Tours.  The standby line is quite long,  I want to ask all of these people what they have used their fastpass for,  please tell me it wasn’t Muppets 3D, or Voyage of the Little Mermaid……

anyway,   we have a quick ride, yet another combination I haven’t seen before,  that can’t be too many left,  and then our final fastpass is for the Music Of Pixar Live,  but that’s not for 1 1/2 hours,  so we aren’t too sure what to do.

We aren’t massive Star Wars fans,  but we decide to check out the behind the scenes Star Wars film.  While we are waiting,   this guy sneaks up on Katie. 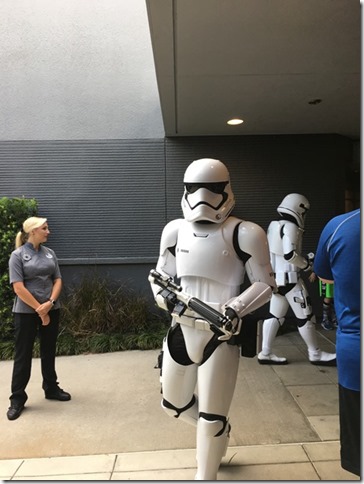 She jumped a mile!  it was quite funny.

We went into the Theatre and had the strangest CM introduce the film.  He was trying to tell Star Wars jokes but getting confused,  at one point I’m sure he said no Flash photography or death sex.   It was all really odd,  I actually thought he might be drunk.

I have only seen the original 3 films and I’m not sure the girls have seen any of them,  but the film was really interesting, and the girls came out wanting to watch all of the films.    We walked through and looked at some of the props and sets, but didn’t wait to see any of the characters.    We were sad to see our beloved Animation Studio is now a character meeting area.

We left Star Wars and walked down to the Theatre,   stopping for some ice cream sundaes on the way. 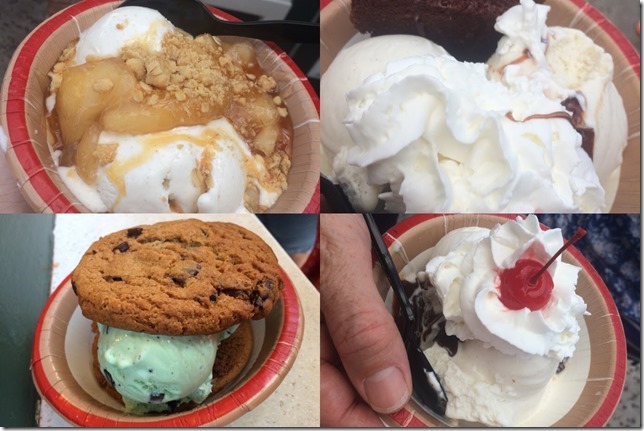 We were able to get into the Theatre early with the fastpass,  so we took a seat and ate our ice creams while the green army men shouted orders to everyone arriving. 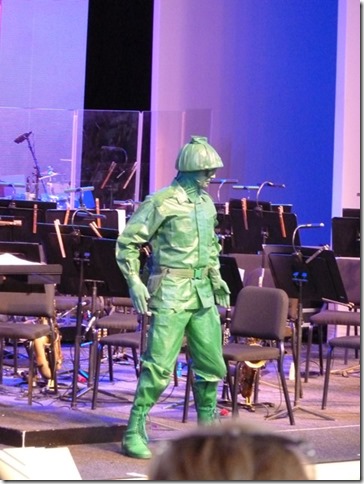 The show was fantastic,  a full orchestra playing the Music from Pixar with scenes shown on screens above,  and occasional visits from the characters as well.   We all really enjoyed it. 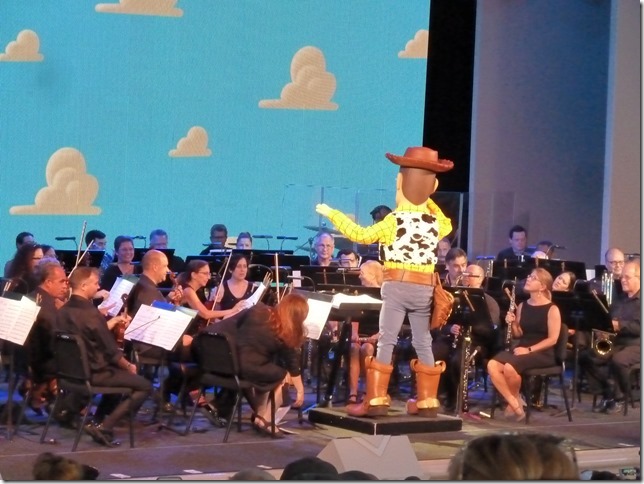 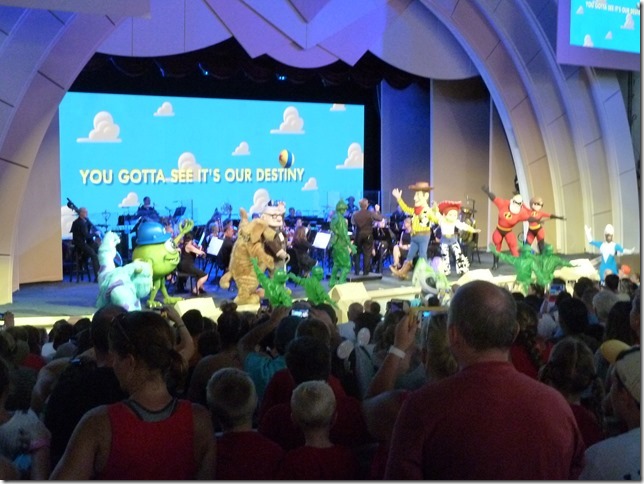 We left the show, and wandered out slowly via the shops to cool down,    caught the boat back to our hotel and then made some tea back in our room.   Enchiladas again.   We are leaving our lovely room on Saturday and I will miss it,  and particularly miss the kitchen,  it’s been nice to be able to eat in the room.  Very relaxing (and cheap!)

One thought on “Day 17–Hollywood Studios”