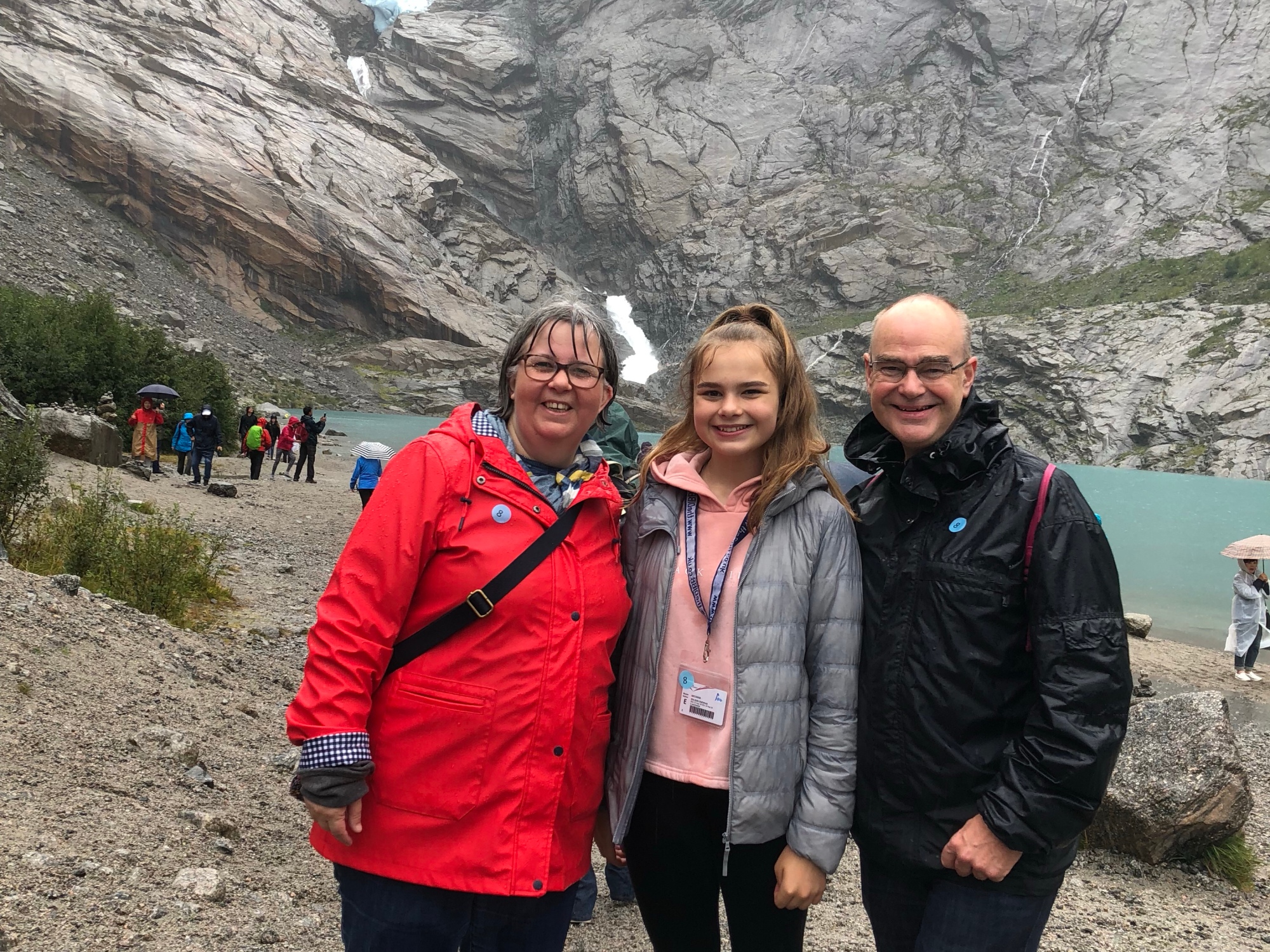 We had an excursion booked this morning for the Briksdal Glacier. I’d been talking to a friend last night who had said the walk was quite strenuous and to try and book a troll car but they were sold out, so we wanted to get off early to see if we could book one on the quayside.

We headed down to the gangway early but it was still closed. There was a delay with the tying up and an announcement that everyone was to wait upstairs so we settled into the atrium to wait.

After a short while they said we could get off but of course everyone was ready at the same time so it was busy and there was no chance to go to the kiosk we had to get straight on the bus. 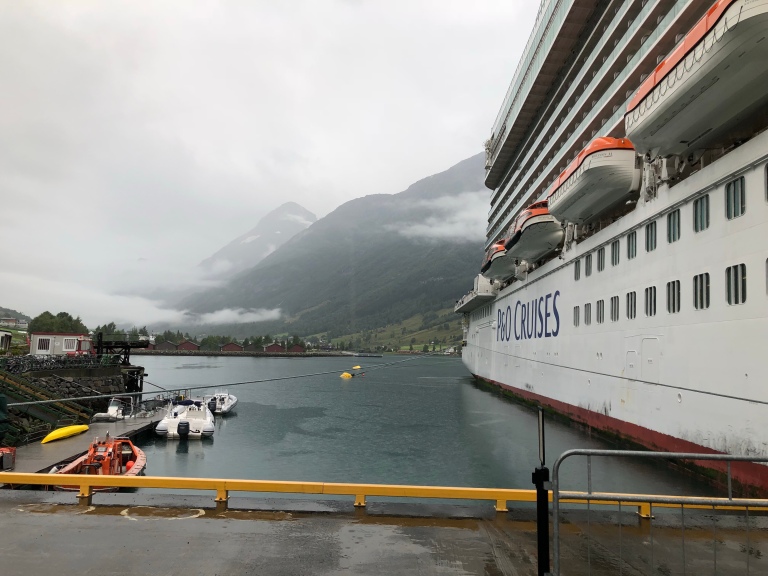 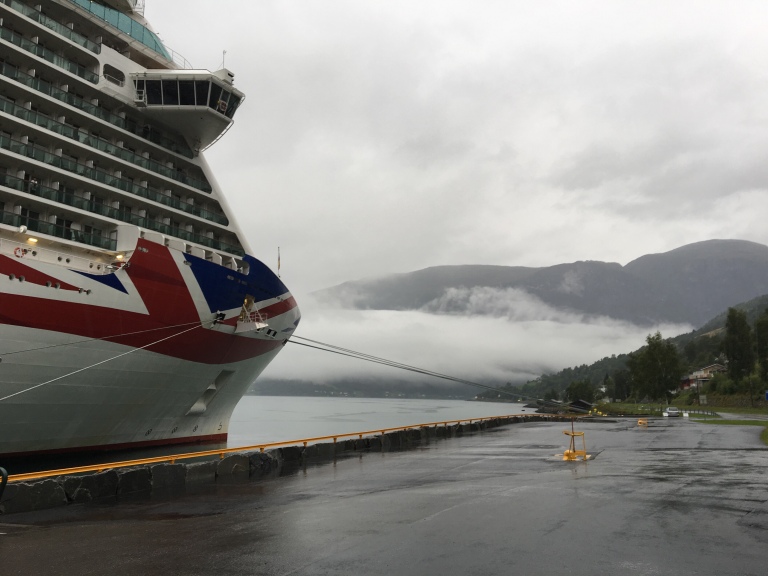 We all boarded and drove along the side of what I thought was the fjord but turned out to be a lake. This confused me all day

I think we were at the end of the fjord but drove further inland past a lake and lots of waterfalls. 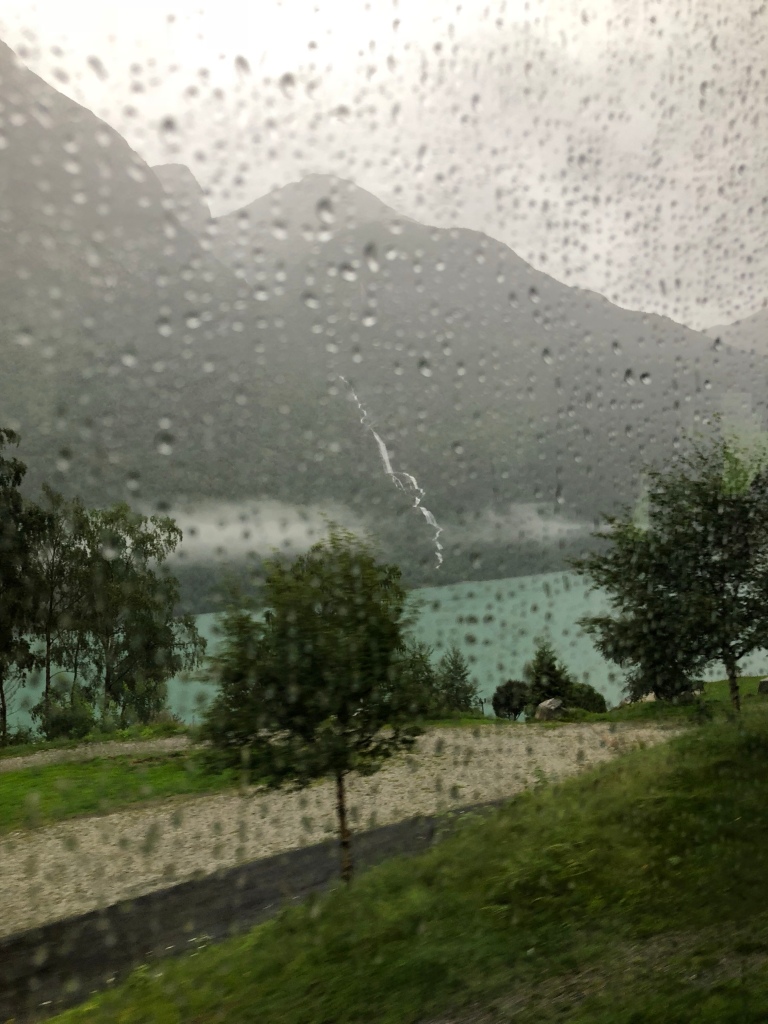 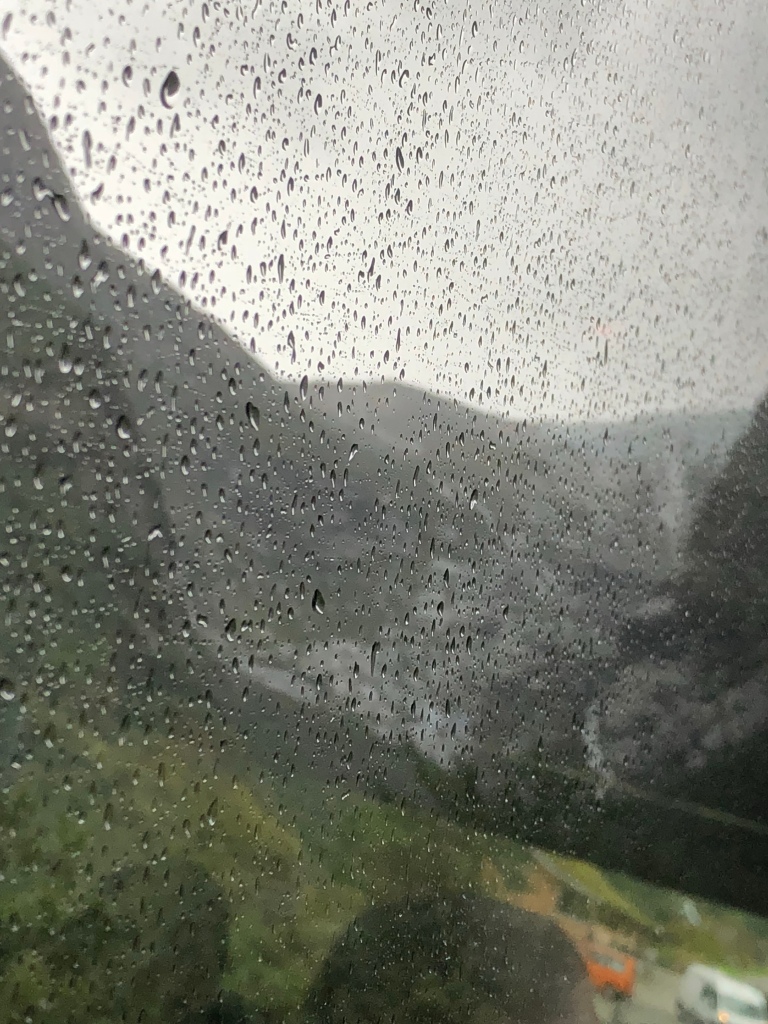 The scenery was stunning but it wasn’t possible to take a photo through the window.

While we drove we had a commentary from a tour guide, after about 40 minutes we got to the drop off location. It was about 9:15 and we had until 11:45 to walk to the glacier and walk back. I was worried I wouldn’t be back in time as I am not a fast walker.

We did enquiry about a troll car but they were sold out, so we set off on foot. We were advised it was a bit steep to start with, we would get wet at the waterfall and then it would level off.

I think wet was an understatement. It was rai I got hard anyway and add in a waterfall and we were drenched. It wasn’t especially cold. Just very wet. You kind of had to laugh as there was nothing we could do about it. 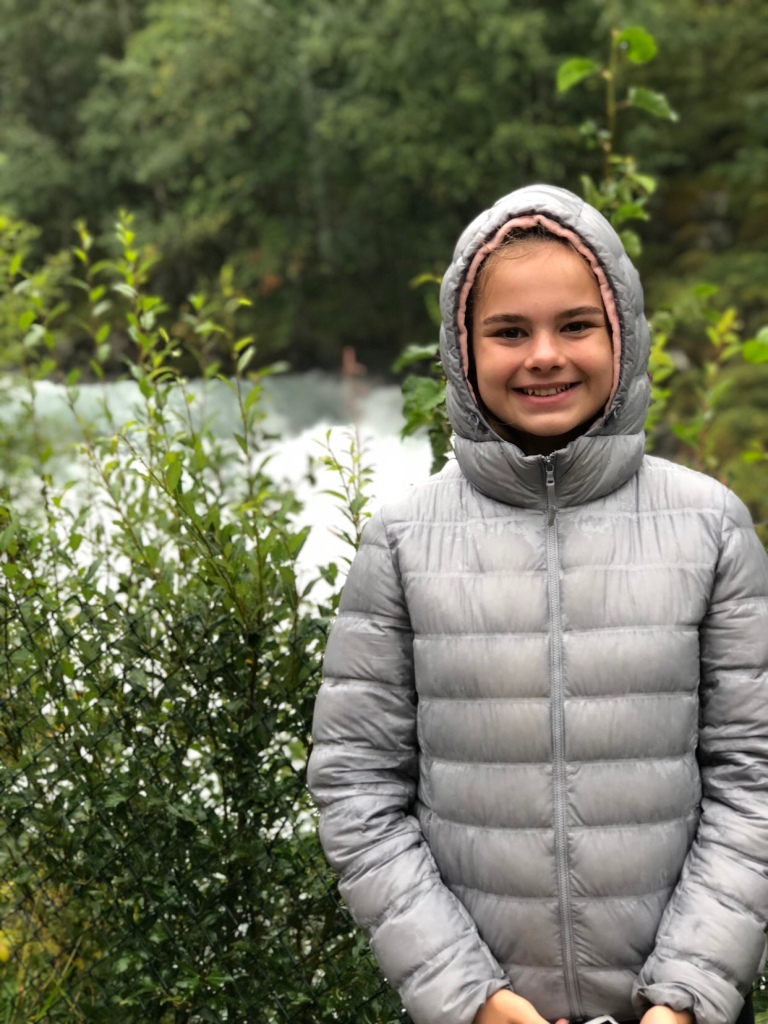 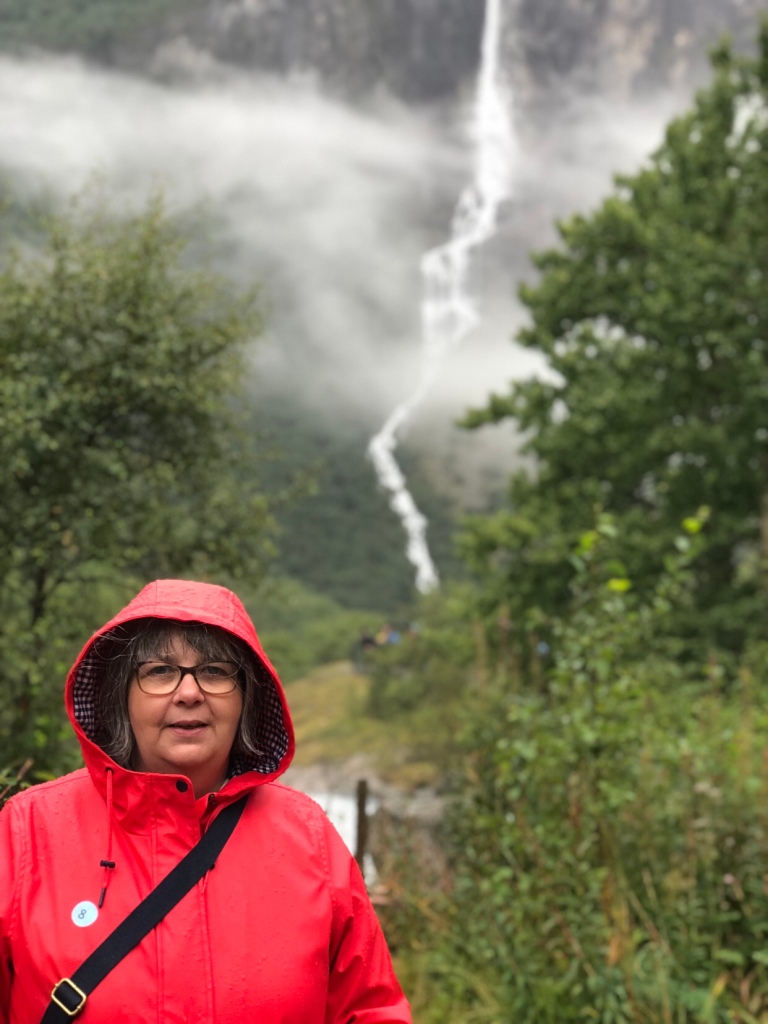 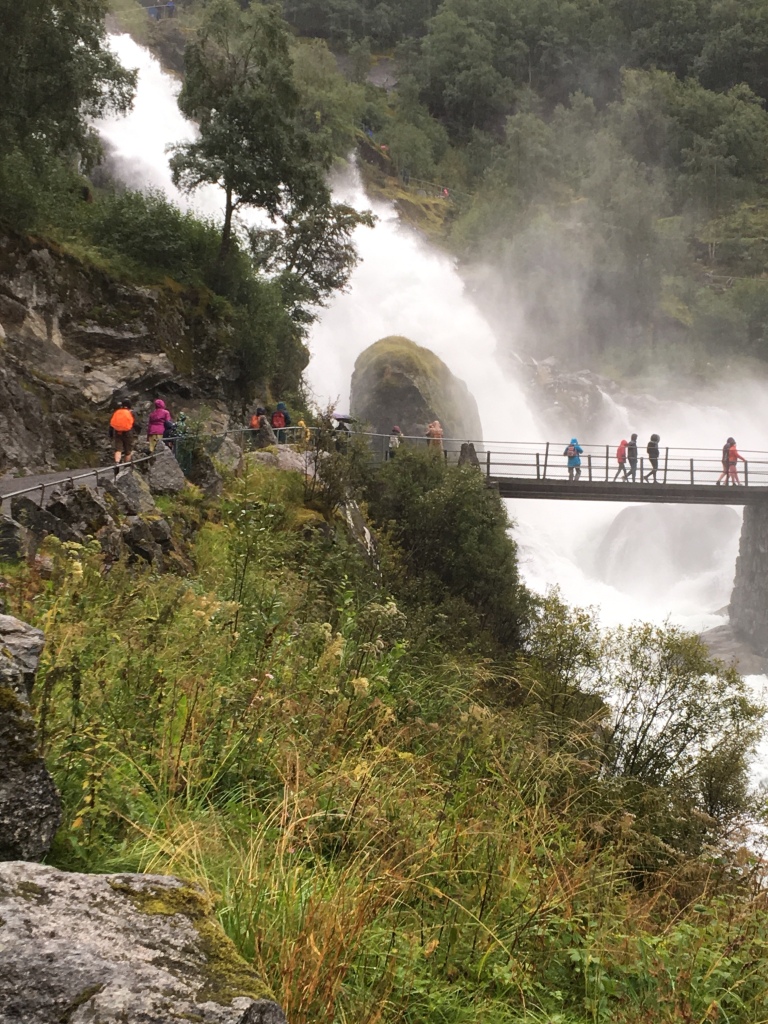 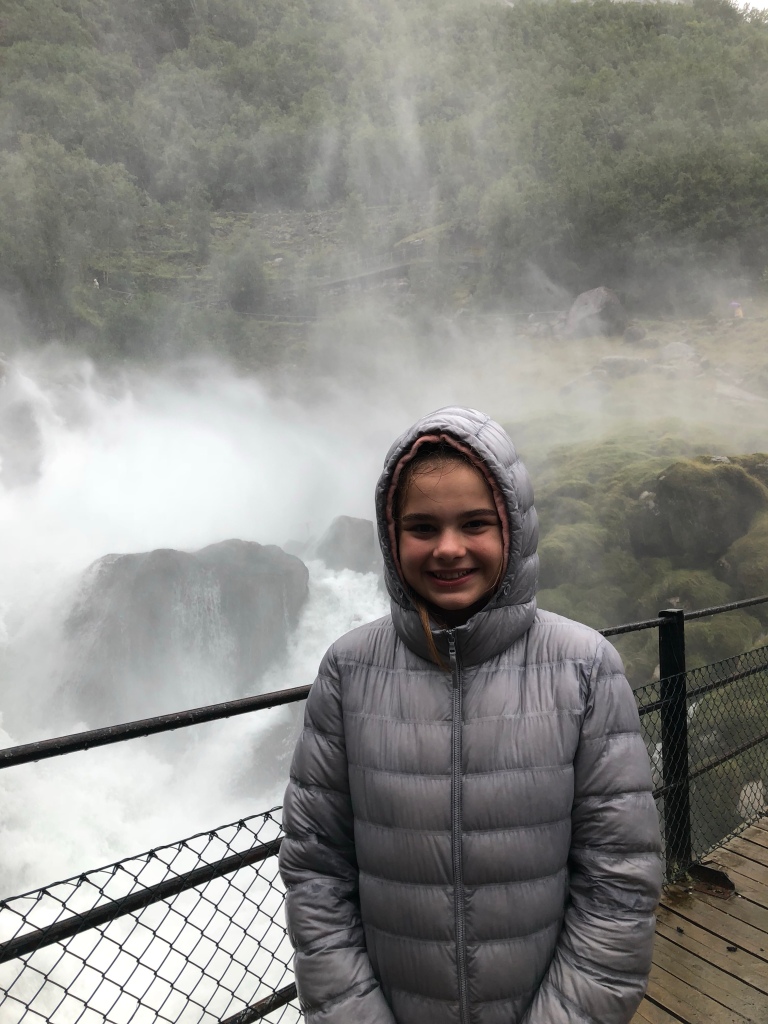 I seem to think when I booked this it said 40 minute walk. I don’t think I’d had any idea just how steep it was as I’m not a fit person and I don’t do steps as a rule. However, I wasn’t going to be defeated so I pressed on. 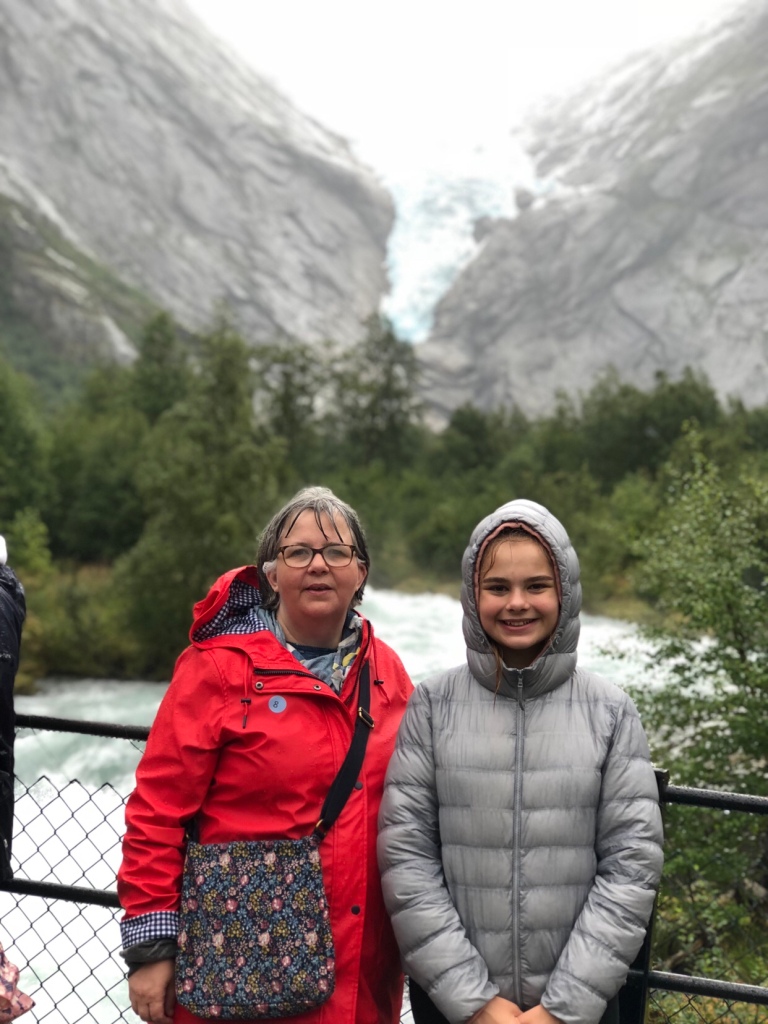 We did make it to the glacier, it took about an hour which I thought was fairly respectable. 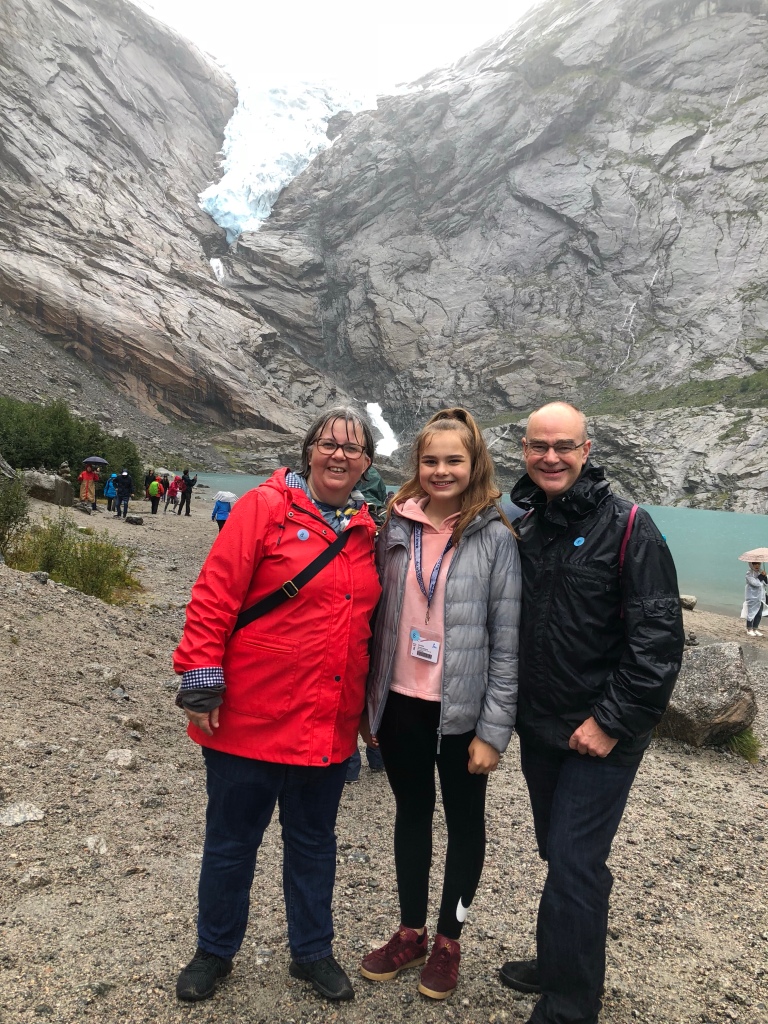 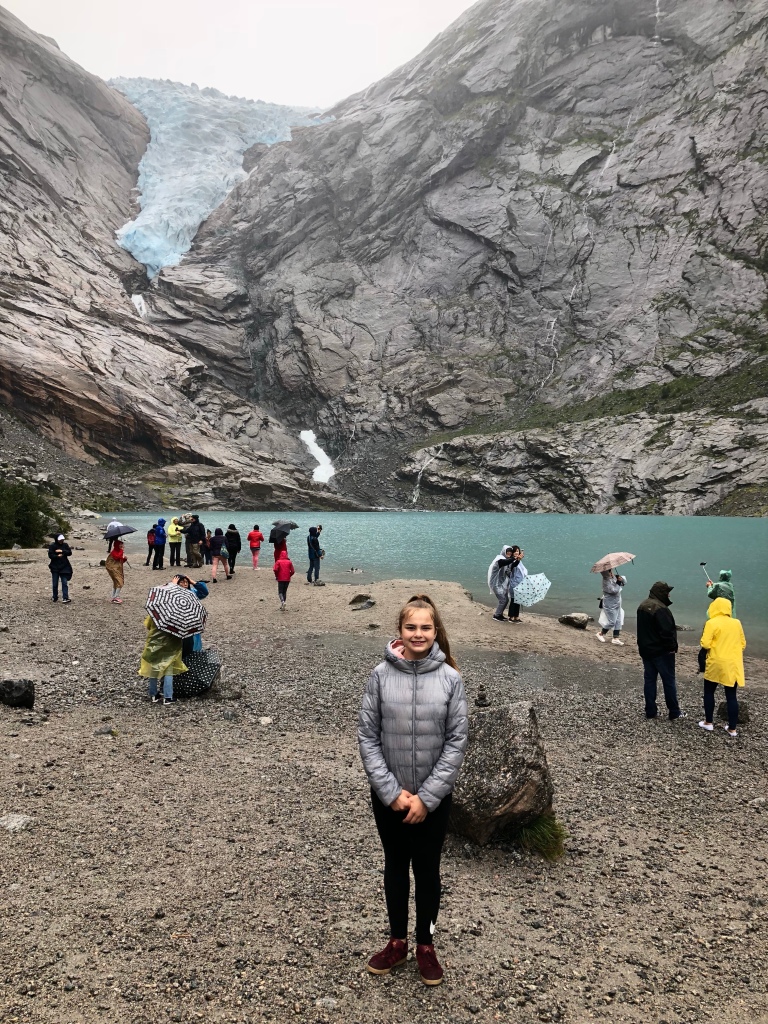 When you finally get to to the top there are a number of signs showing how much it has retreated. It’s quite shocking really, it’s shrinking at a rapid rate.

We walked back down quicker than we walked up. But it was still quite challenging as it was so wet it was slippery. 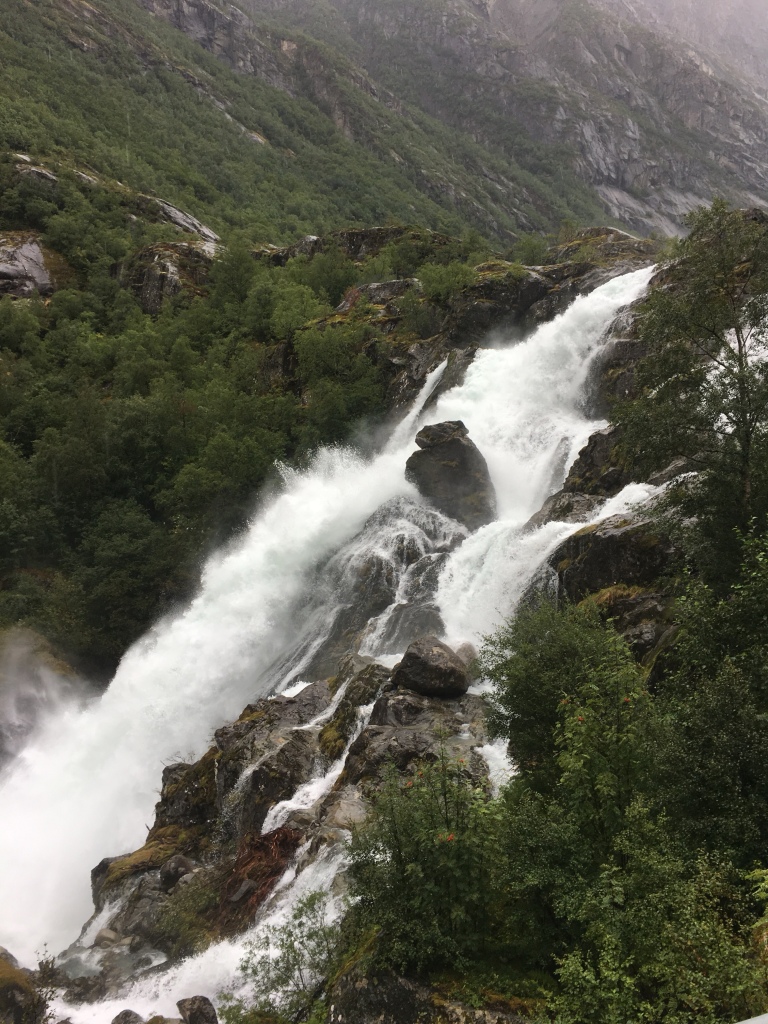 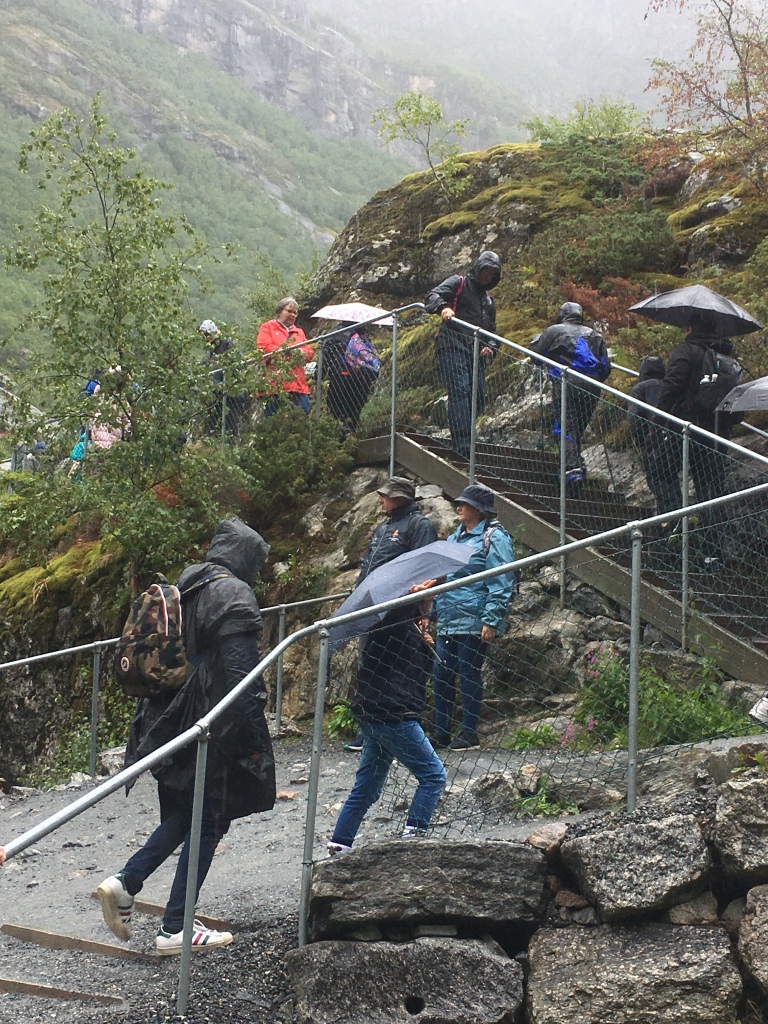 We made it back down with half an hour to spare. Which meant we had time for a much needed coffee and cake. 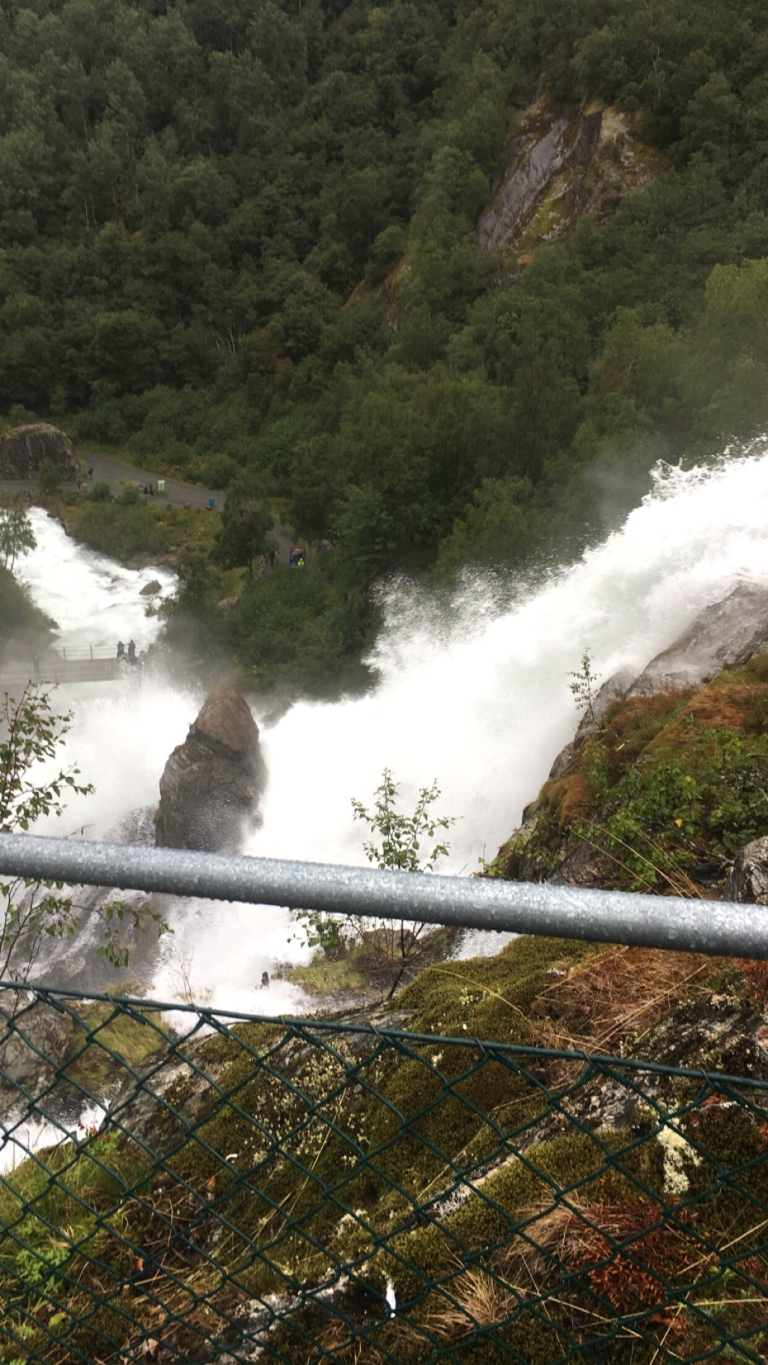 I was very pleased with myself for getting there and back. And the scenery had been stunning. It was just a shame about the weather.

We found our bus and took of lots of wet layers, to try and dry off a little. We had more facts on the way back to the boat. Apparently white paint was expensive. And red paint was cheap. So white houses were for the rich and red for the poor.

Also the water is that amazing green colour due to the silt.

We stopped along the way for a photo. Which I appreciated as you couldn’t manage one through the wet windows. 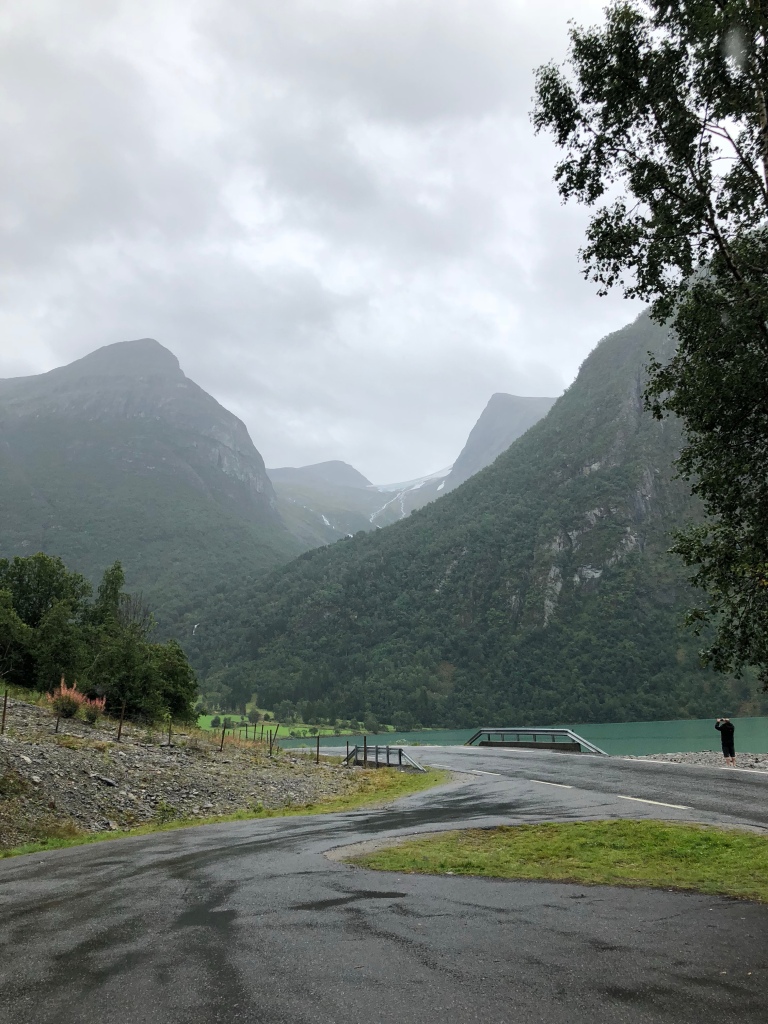 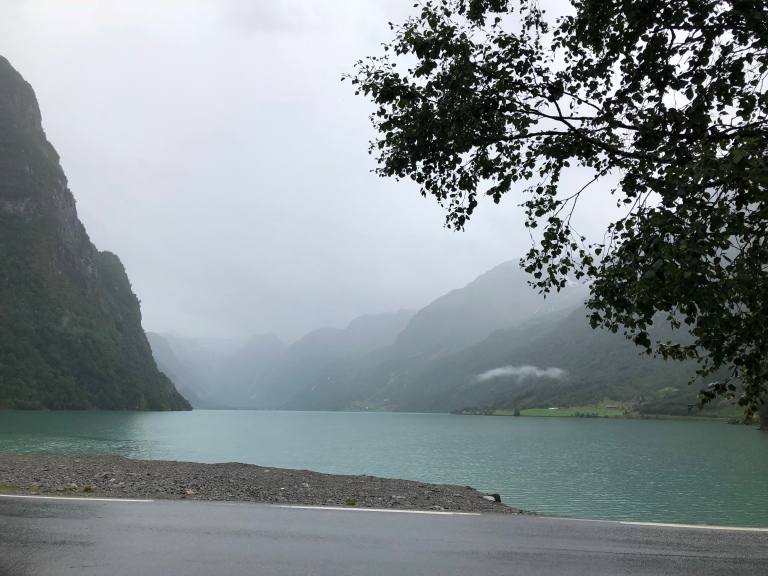 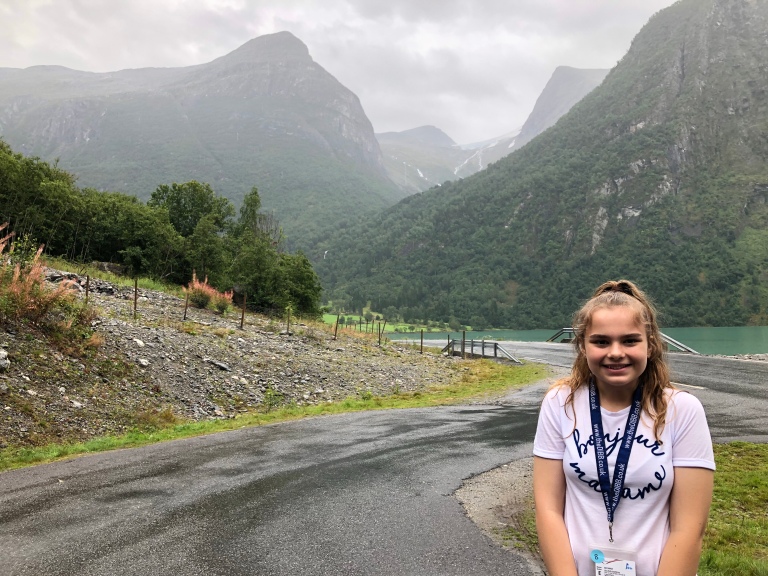 This is a lake not the fjord.. 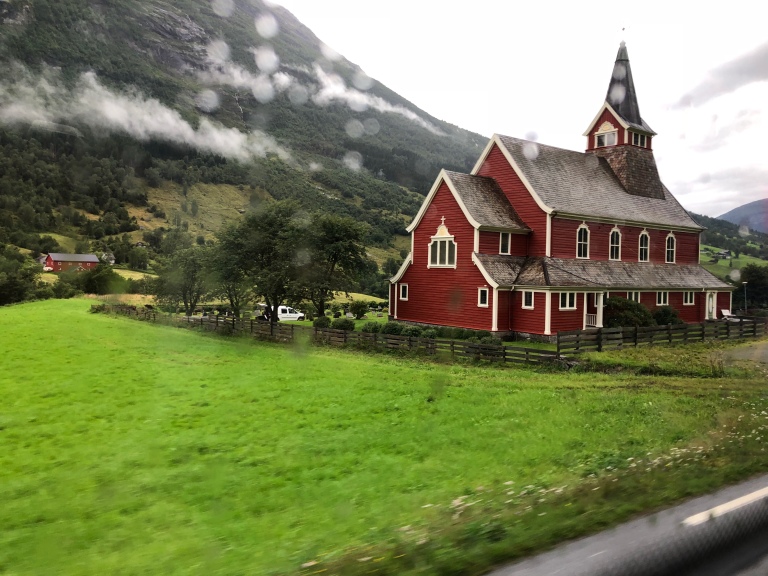 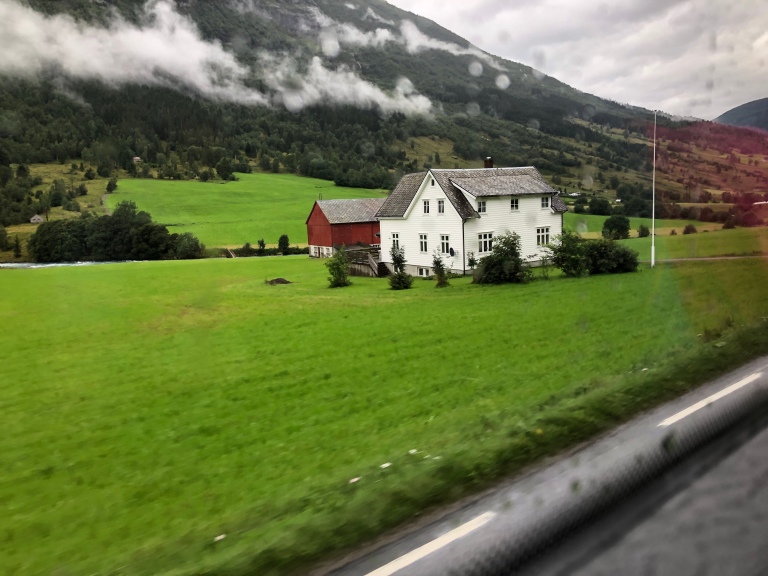 This is the village of Olden where we are docked.