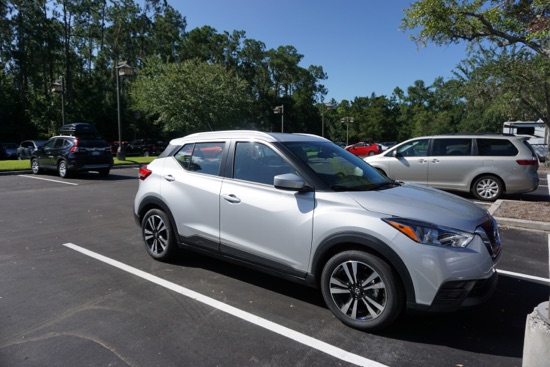 As is always the case when I’m tired, I was wide awake at 5am. So I spent some time writing my blog. Eventually we woke Molly up as we were getting hungry. We decided to go to IHOP for breakfast and went out to find the car.
That took a while as we all remembered a white car by it’s not white.
It’s quite nice. Similar to our Juke at home. 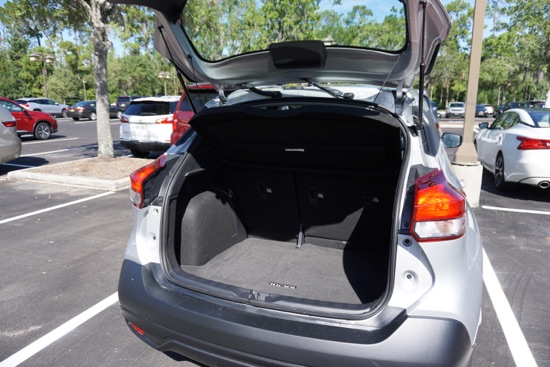 But with a much bigger boot. 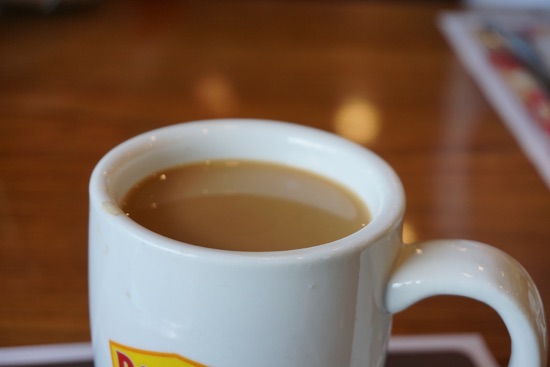 We drove down the 192 to IHOP and then straight past IHOP spotting as it disappeared in the rear view mirror. So a quick change of plan and it was Denny’s for breakfast.

We had grand slam breakfasts and coffee and I played with my new camera for awhile. I’m quite pleased with it. 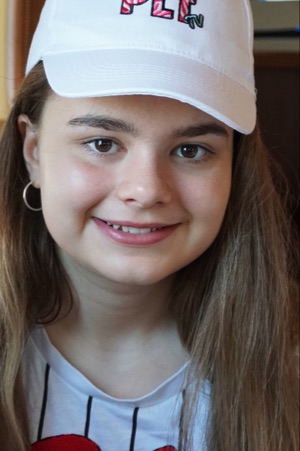 After breakfast we went to Target for a few supplies. We got soft drinks, snacks etc 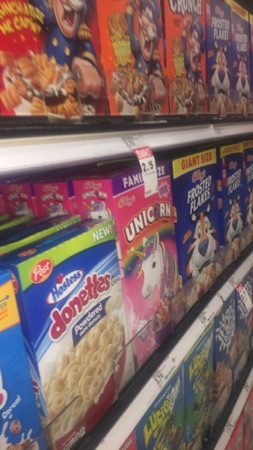 Some cereal but not this Unicorn one, Suncream etc. I’m the end we had quite a trolleyfull. I had wanted a wrist strap for my camera but I could find one. I did see the same camera for a lot more than I paid so I was pleased with that. 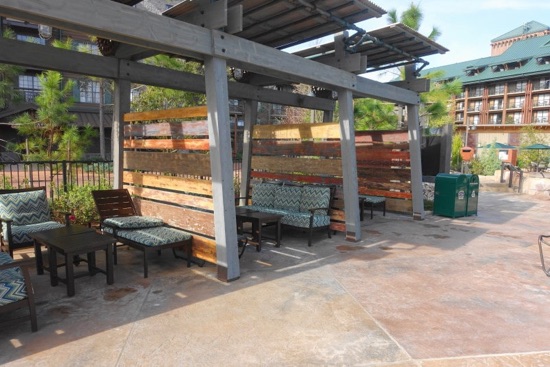 We returned to our hotel and contemplated our massive pile of groceries and the walk from the car to the room. In the end we left a lot of the water and canned drinks for later and carried the rest.

After our morning activities we where ready for the pool. Our room is about two steps from the main pool so we headed that first. It was very busy with no seats left and pool games about to start. Not really what we wanted. So we walked around to Boulder Creek pool. This was quieter. Quite a lot of free seating but not in the shade. The towel guy moved a shirt that had been reserving a shaded table all day and said there had been no one sitting there. This must be the same the world over.

We didn’t get a spot in one of these cabanas as I’d guess you need to be there at 7 am for that. But I loved the look of them and will try for one later.

We had a little dip and then I read my book for a while. Just dipping in to cool off occasionally. This is why the single towel saving 4 seats frustrates me. I actually sit on my seat. So many we saw were never used while we were there. Anyway. Rant over… 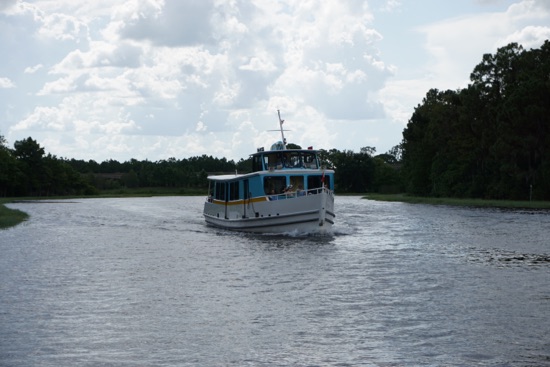 We had a few hours by the pool and then went in to get ready. Phil took a wheeled bag to the car for the heavy stuff, and we headed to magic kingdom via boat.

Apparently there was a storm in the area as there was a bit of discussion at the dock about whether the boats were running. But we got there with no problem. 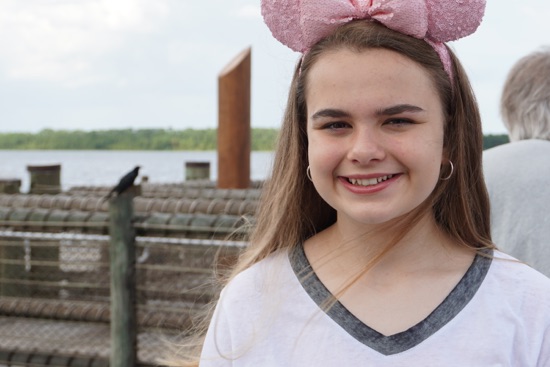 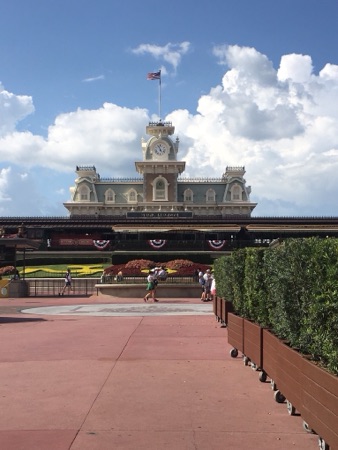 We got to Magic Kingdom just before 5, and as soon as we arrived the band started to play. 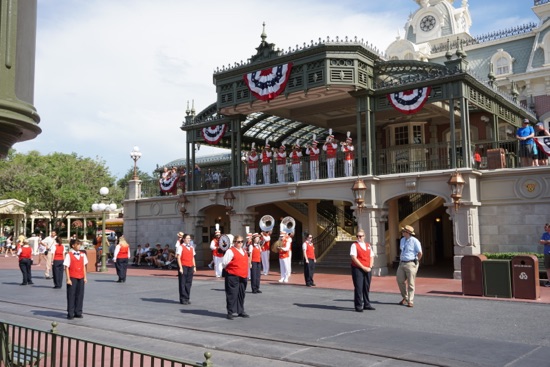 I’m going to expect this treatment every time I enter a park!

It was the flag lowering ceremony. I had heard of it but never seen it before. It was quite nice, a bit of very American pomp. We watched for a few minutes before heading up Main Street. 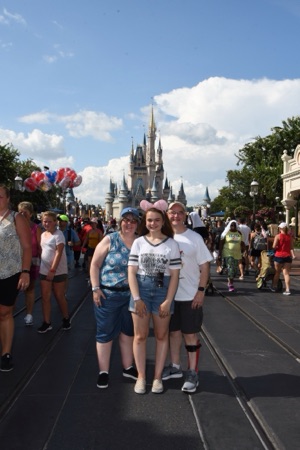 Main Street was heaving but it was people leaving. It felt like everyone was leaving and we were fighting against the tide.

We did eventually get to the top and get the obligatory but pretty awful photo taken. 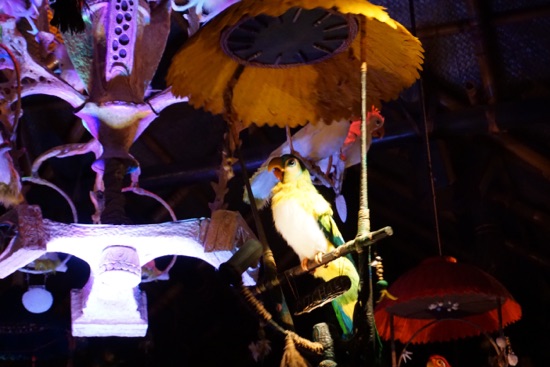 In the pursuit of a relaxing day in what as a very busy park, we made an obvious first stop. The Tiki rooms. 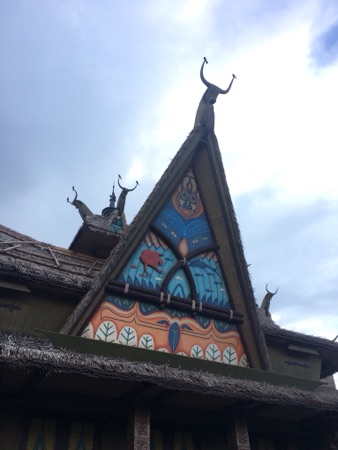 Really this was a relatively quiet place to wait for our Pirates Fastpass. We enjoyed the singing birds, as much as you can enjoy singing birds.

And then it was time for Pirates. 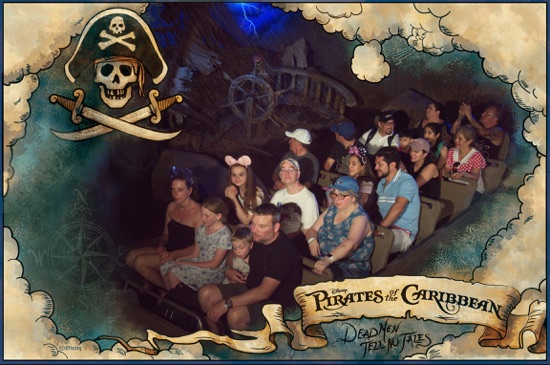 I actually really like pirates. Not that’s you can tell from this photo!Molly of course is smiling and posing.

We yo-ho’d are way through the murky waters and emerged into a busy park.

We decided it was time for tea, and walked towards Columbia Harbour House. We stopped on the way to do a mobile order, and Molly went off and took some photos. 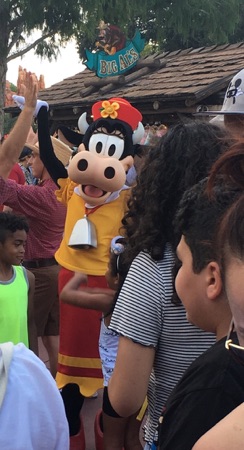 There were characters outside the Country Bear Jamboree. Not something I’ve seen before, and it wasn’t a queue it was just a crowd which is also unusual.
We walked round to Columbia Harbour House to collect our food. Why are people a ueung when you don’t need to?
Molly caught back up with us, and we went upstairs. To the truly shocking discovery that someone was sitting at ‘our table’. We did get a table quite easily but just not the one we usually go for. 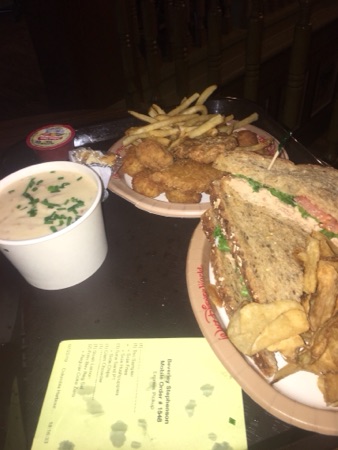 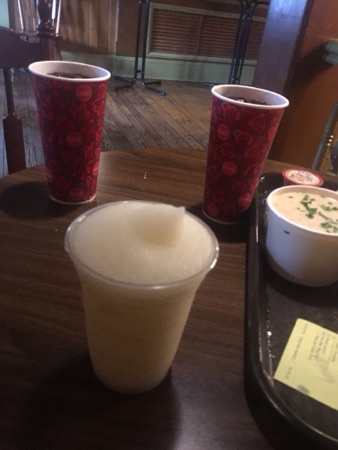 We had a shrimp/fish/chicken platter, a tuna sandwich, and some clam chowder, plus two drinks and a slushie. Which came to $48. It was all pretty good, and we like the calm upstairs.

We had another fastpasss for 8:30 but it was only 6 so I had a look to see what else we could find. Not a lot available on a busy evening this late but we did get Its a Small world. So that was our next stop. 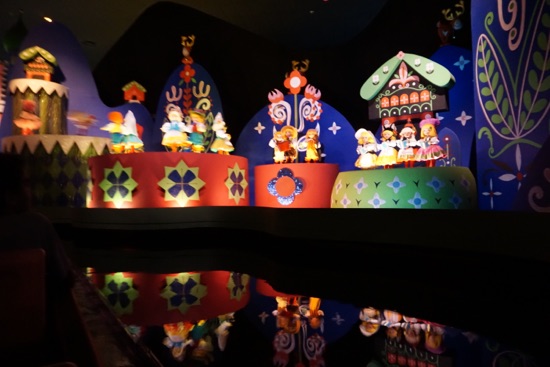 Molly took charge of the camera on here, and she concentrated on reflections. She’s got a good eye but I neglected to tell her there was no back button focus so she got a few blurry ones before she asked why it wasn’t focussing. 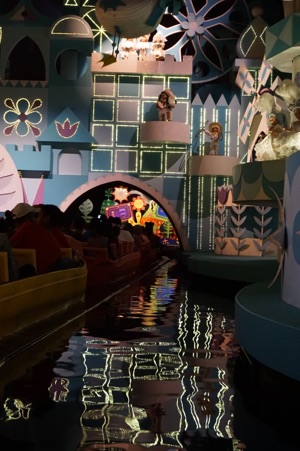 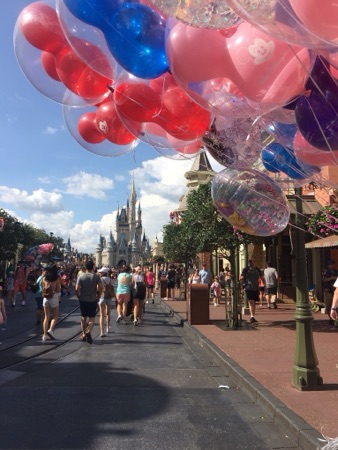 We went to Mickey’s philharmagic next which was full. We didn’t wait long but it was one of the only times I’ve had to go through the queue to get into the waiting area.

However, this had an unexpected bonus as the theatre was full of people who hadn’t seen the show before. The show was really enhanced by the reactions of everyone. Genuine laughter and surprise all the way though. It added a lovely dimension to it. 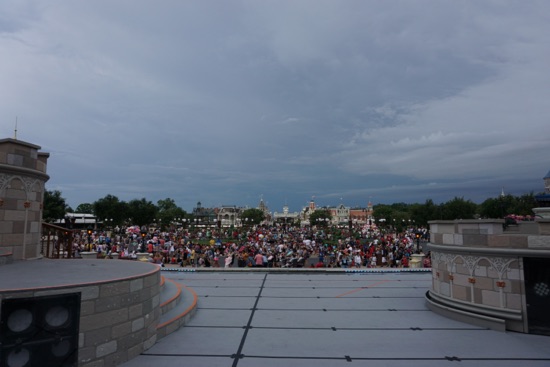 We came out of the theatre into complete madness. It was about 7.45 and there were people everywhere waiting for th fireworks. Plus the sky looked very ominous and the rain was spitting. There was no way we were waiting for Buzz, it was time to go.

We walked down a very busy Main Street. It was still 1 1/2 hours till the fireworks and everyone was camped out waiting. I have done it but not tonight.

We got to the ferry landing and we had just missed a boat so we had to wait a while. 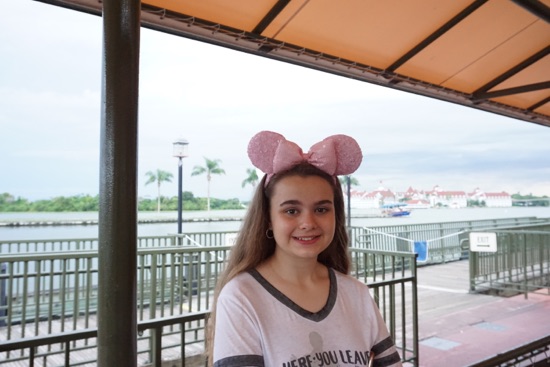 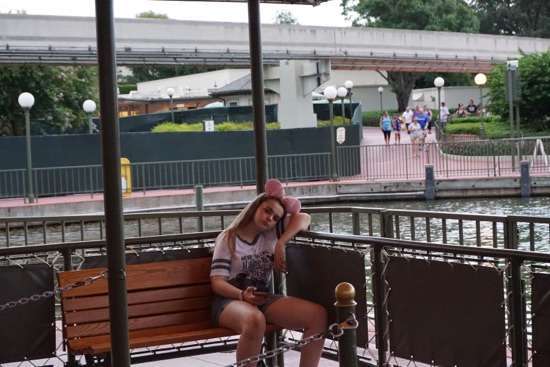 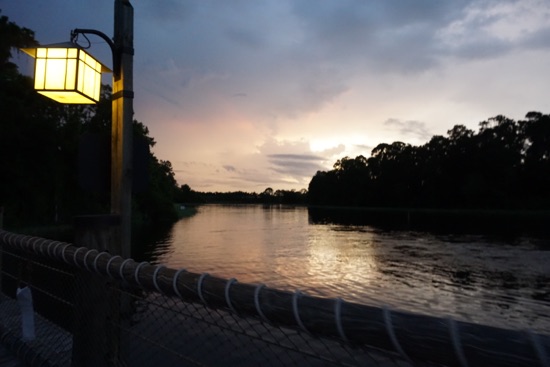 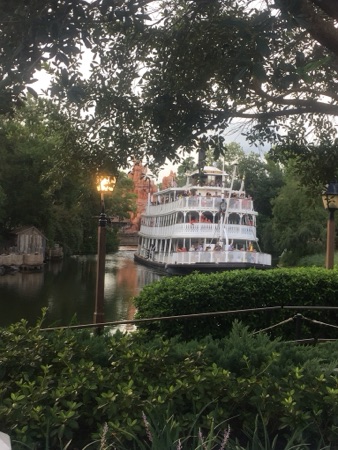 A couple of photos I’ve missed from the day. 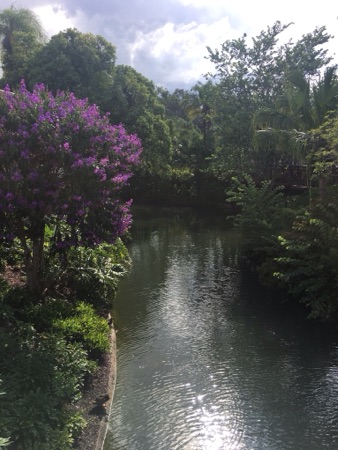 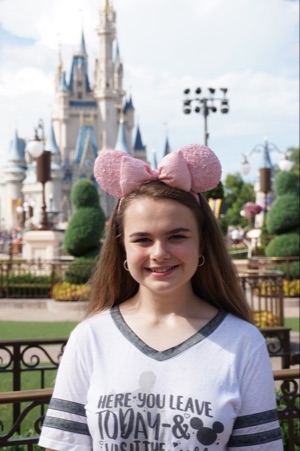 And one of Molly I somehow missed.