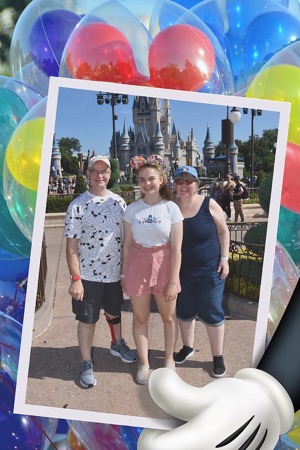 We were a little slow to get up and out and so we didn’t go for the boat to MK until 9:30. The boat is a lovely way to start the day.

We wandered up Main Street and had a photo taken. I need to get some posing lessons! 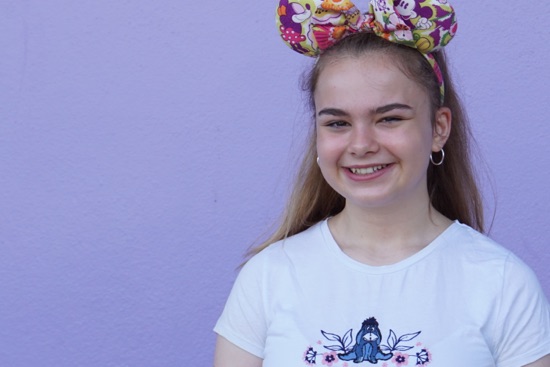 I had a little play with my camera on the way up Main Street, I’m enjoying playing with it and also enjoying that it’s not breaking my neck. We stopped in front of this purple Instagram wall for a quick photo. 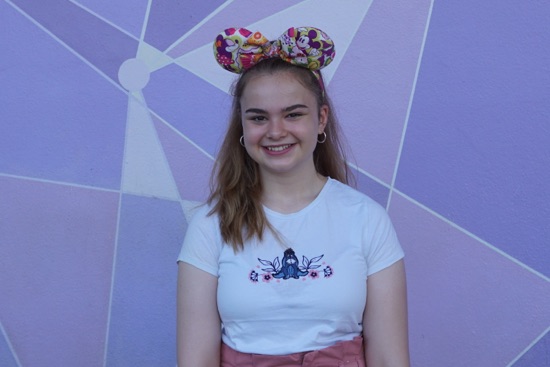 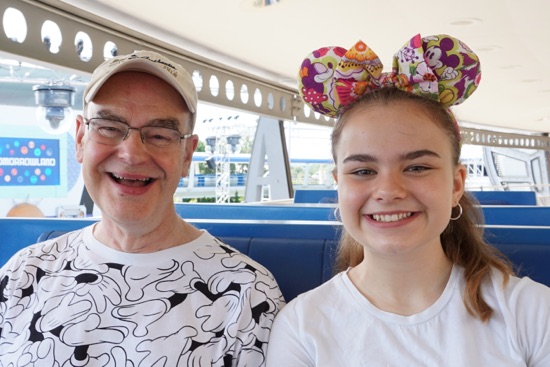 We had a fastpass for space mountain but we had a while to wait so we hopped on the people mover. There was a short queue which is unusual so I think they had speeded it up. It felt like we were flying along and every time I went to take a photo we zipped around a corner.
We could see the Tron construction. 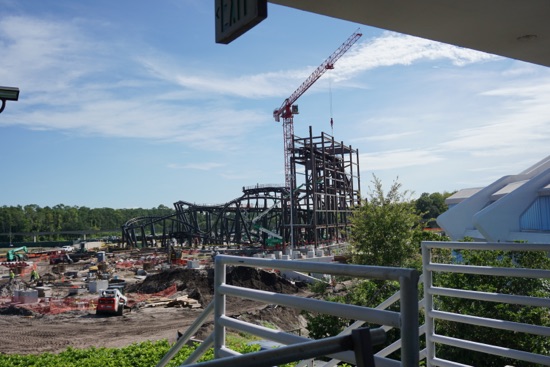 Then we went through Space mountain which was pitch black. It’s always dark but this seemed extra dark. I don’t think the ride was running. 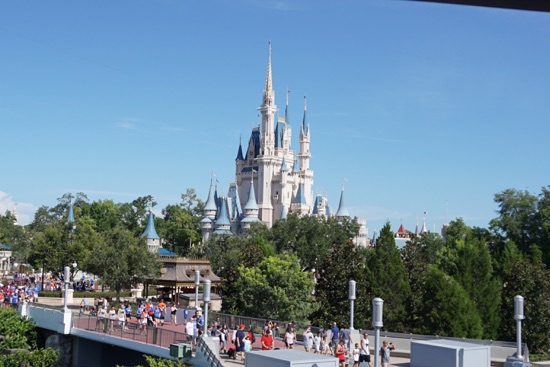 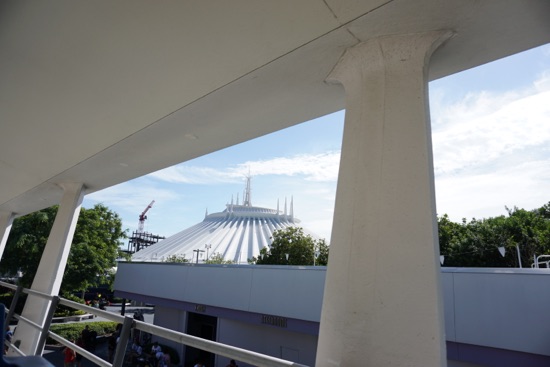 After the people mover it was time for Space Mountain.
We went in the fastpass line past a massive queue of people. We were almost at the boarding area when we stopped and waited. And waited. We didn’t move for ages. Then the lights came on, and we were told we had to leave the line.
We were given an any ride fastpass on our way out. 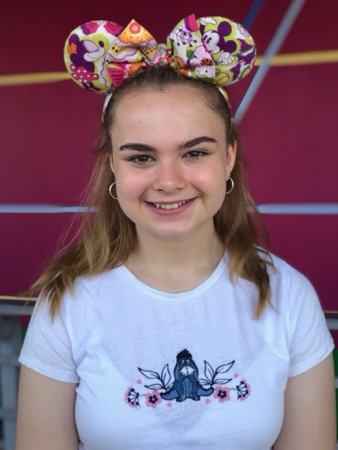 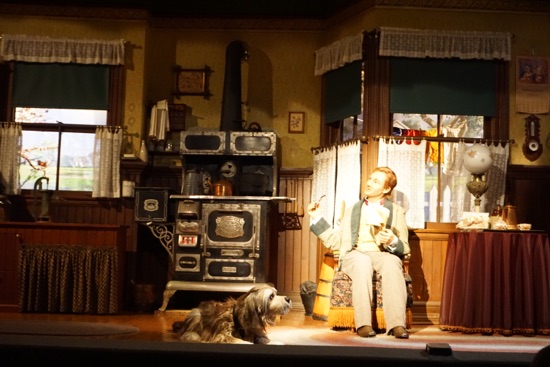 It’s great big beautiful tomorrow… Space mountain was still down so we decided to use our fastpass on Buzz, But the fastpass queue was right around the corner, so we decided against that. 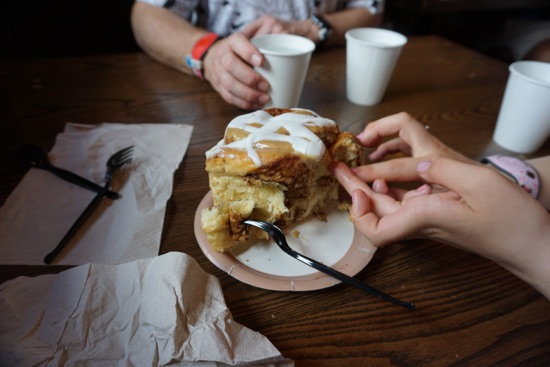 We had a 7 dwarves fast pass, so we went up to Gaston’s for a small cinnamon bun first. While we were sat we ordered our food for our lunch at Be Our Guest. 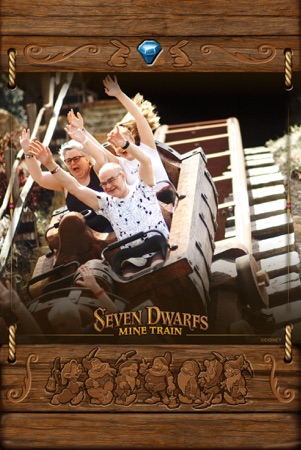 7 dwarves went off without any glitches, so that was good. I even remembered to put my arms up for the photo!

We had an hour until our Splash fastpass, and we had a use anywhere FP so we decided on Big Thunder.
We walked over there and there was a man with a flag saying ‘end of fastpass line’ miles away from the ride. He was saying 50 minutes in the fastpass line. I think there were some trains off. 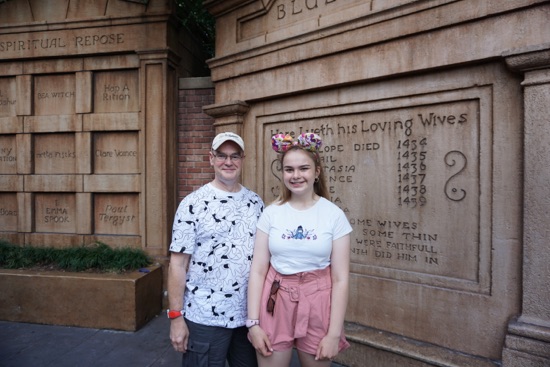 We decided 50 minutes for fast pass was not for us, so we went back to Haunted Mansion instead. This was more successful, and we managed to ride with out too long of a wait, which seemed a bit of a miracle on a very busy day.

After Haunted Mansion it was time for Splash Mountain. 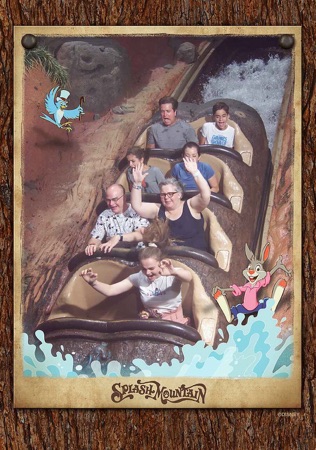 So we made our way there and there was only a short queue for the fastpass line. We got on quite quickly and I didn’t get wet at all, so I was pleased. Molly was rather wet! But it was hot and she dried off quickly. 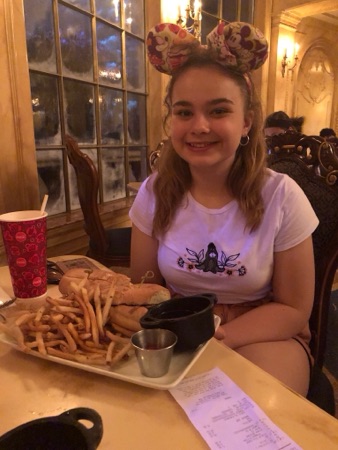 We had a booking for lunch at Be our Guest, so we walked there and because we had precooked our food we were able to walk straight in. People who needed to order had to wait quite a while so it’s definitely worth doing. We had only placed the order while we had our cinnamon roll earlier so you don’t have to do it ages in advance.

I have say my french dip was delicious. 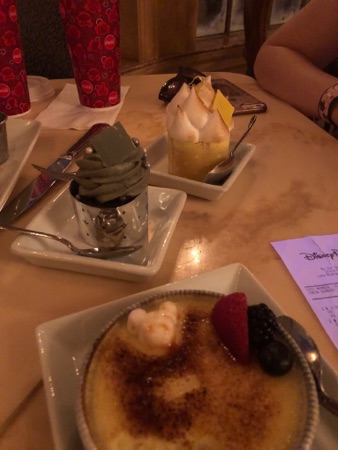 For dessert I had creme brûlée, Molly had a lemon meringue cupcake and Phil had the grey stuff which was of course delicious.

We ate here a few years ago and weren’t impressed but we had a really nice meal today.
We also managed to sit by the windows and watch the snow which was pretty. 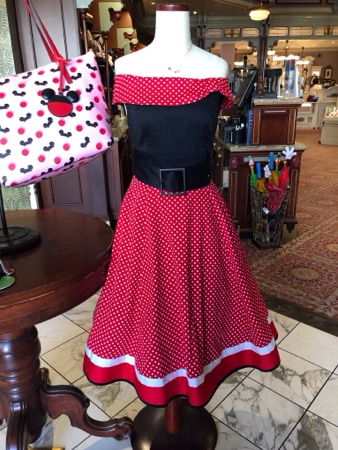 After lunch, we decided we were ready to go, so we walked back down to Main Street, had a browse in the shops and then got the boat back to Copper Creek. From leaving the restaurant to walking in our room took 35 minutes which I thought was ok.

We have had a very lazy afternoon, and have borrowed a DVD to watch this evening. Molly chose The Muppet Movie and is a little disappointed to find out it’s the 1979 version with the Rainbow Connection song…

One thought on “Day 3. Magic Kingdom.”