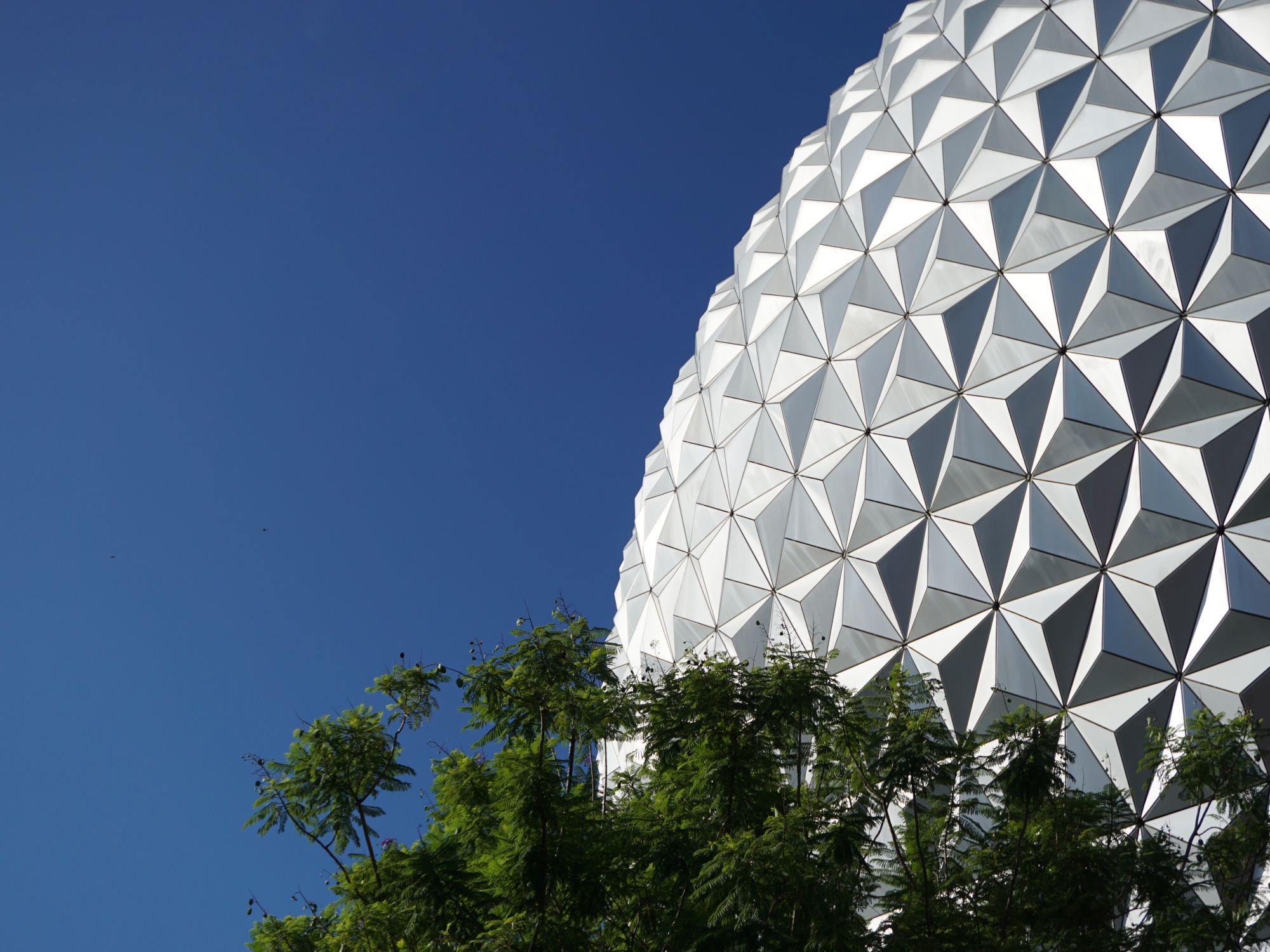 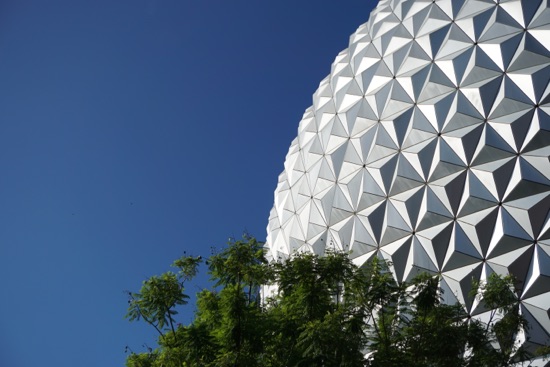 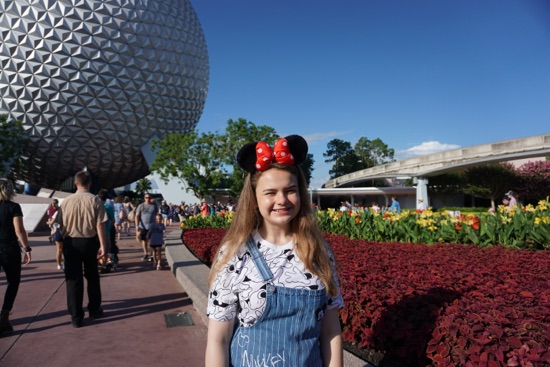 After a few late starts we decided we needed to be up out early to beat the heat. We set the alarm for 7, and we were at Epcot before the park opened.

It wasn’t too hot, and we were feeling pleased with ourselves. We had a short air until they let us in, and then we went straight round to Test Track, When we got there the queue was starting to form, but we joined it and it wasn’t too bad. We seemed to be inside quite quickly and there was plenty to look at while we waited.

We designed rather a fabulous pink car, but unfortunately our magic band s didn’t scan when we boarded the ride car so we didn’t get to see our results on the way around. Not that it matters when you are flying along like this. 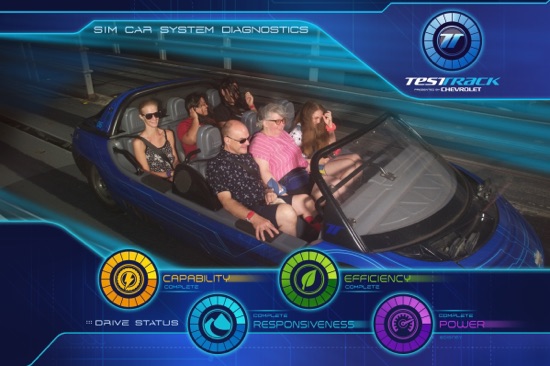 Our next stop was Starbucks for some Frappachinos, and then we had a fastpass for Soarin. This is still one of my favourite rides, I think it’s so well done, And I love the flying sensation. We considered riding The Land but not with a 30 minute queue. Instead we were straight back across to Mission Space. We had a fastpass for this, but we didn’t need it, The green side was pretty much a walk on. 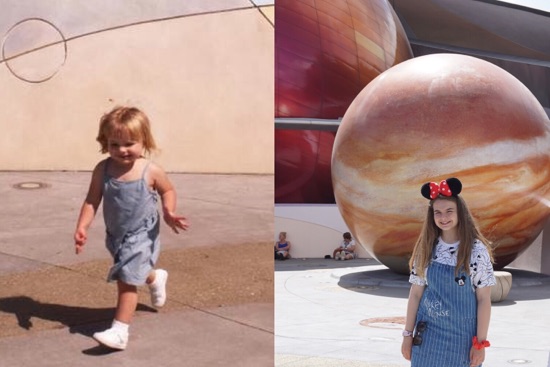 I’ve always loved this photos Phil took of Molly outside Mission Space when she was two. So I made her pose to recreate it. She wouldn’t run for me though. …

That was taken the only time I ever did the full Mission Space and I didn’t feel great after so we didn’t try it again until our last trip when Molly was on a mission to try every ride. I agreed to do the Green and that was fine. She wanted to try Orange this year but she didn’t want to ride on her own, so we went back on the Green. It’s quite a good ride although I couldn’t remember which job I had so kept pressing the wrong button!

When we came out of Mission Space the sky was dark and very ominous, so we went into Innoventions, we only ever go on here to avoid the rain… we went through a colour exhibit which I don’t think we’d seen before. You could play with magic paint brushes and paint the walls. It was a reasonable place to hide from the rain. The rest of innoventions is gone and I think it’s all closing soon.

When we came out it had obviously been raining very hard. We had a little look around Mouse Gear, they have lots of lovely retro style t shirts and molly is making a bit of a shopping list. It’s getting ever longer… 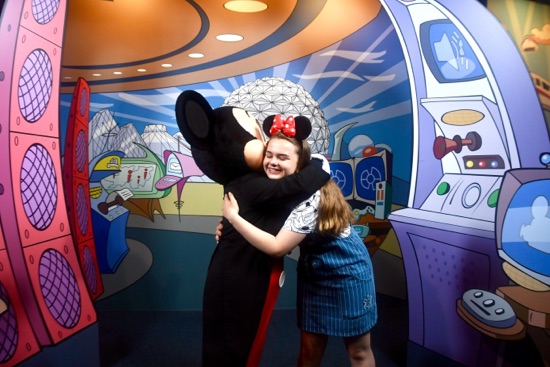 Next stop was the Character Spot, again we had a fastpass so we were straight in. 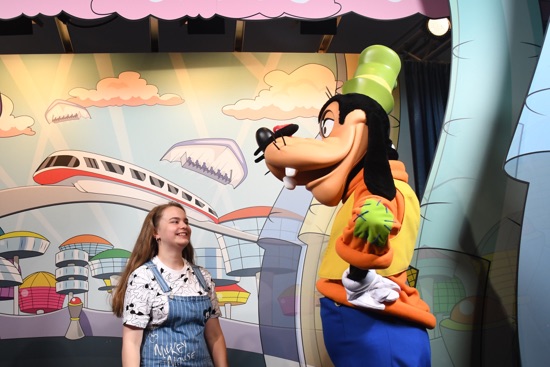 Goofy was taken with Mollys Ears and felt they made a good nose decoration. 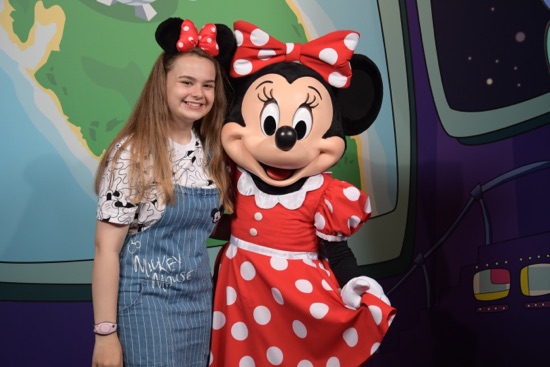 After our photos we had a bit of a debate about what next. The plan was just a morning in the park and then to head out but we weren’t ready to leave yet so we decided to walk around Wprld Showcase. 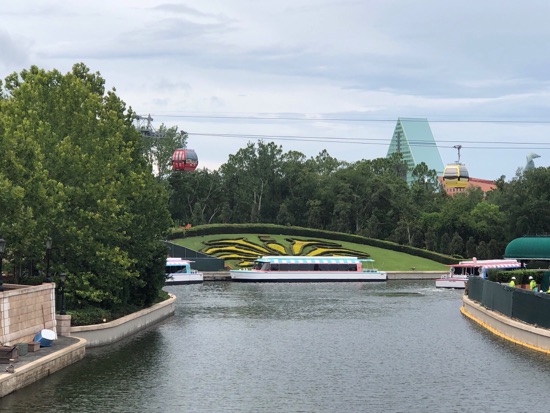 We could see the new cable cars. This is going to totally change this international gateway making it a much busier entrance. 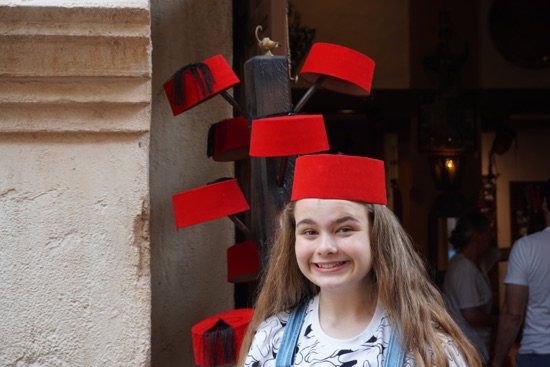 We stopped in Morocco to try on a Fez and also for some lunch. We had a lamb and chicken platter, and some sliders plus a couscous salad which turned out to be a very very tiny pot of couscous. 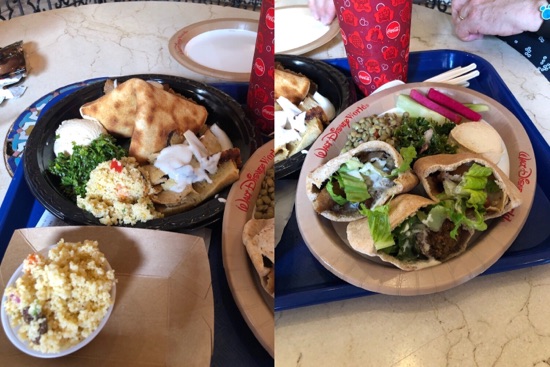 This as really nice, and a nice change from some of the other offerings around the park.

We were starting to flag now, and we were st the furthest possible point from our car so we just walked around the lake, enjoying the view but we didn’t really look st any of the areas in much detail. Just enjoying the relatively cool weather (after the rain) and the lack of crowds. I do love Epcot. It rarely feels crowded and you can just relax. It’s much less frenetic than magic kingdom. 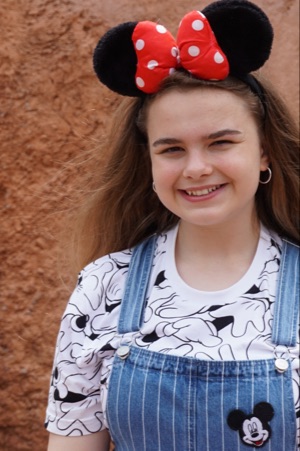 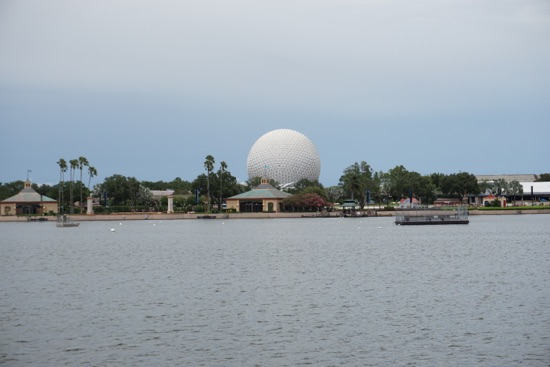 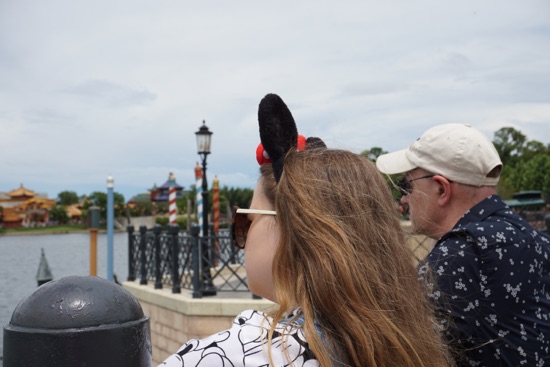 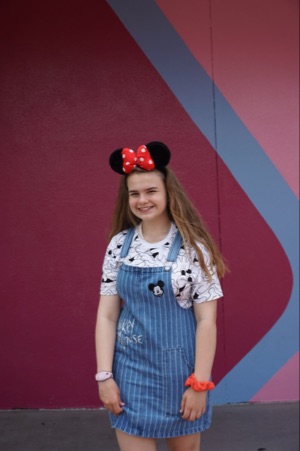 I challenged Molly to get a photo in front of all the Instagram walls. This one was funny as it was at the exit to Spaceship Earth so every time we tried to take the photo people would come streaming out and she would stop and let them out. 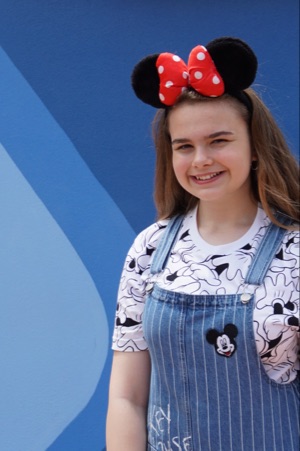 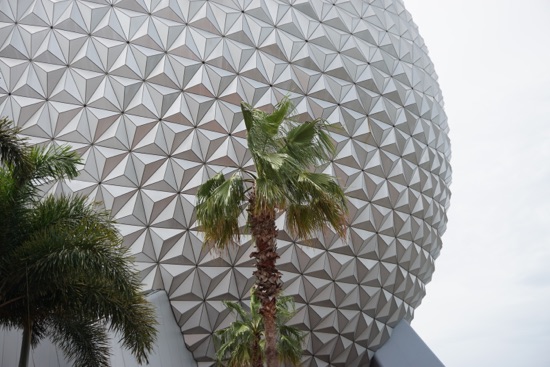 We left the park, and made our way back to the car. We were parked very close but they are doing some construction outside the park so you have to walk quite a detour to get to the car park.

I wanted to go to Walmart as I’m looking for a camera strap, so we headed there. We tried he new one on old lake Wilson. It was very close and easy to get too but it was heaving. Not a pleasant experience. Not that I expect much from Walmart. No camera straps but i bought some shorts, and other bits and pieces and we spent $80 on random stuff. Walmart and Target both have this affect on us…

At this point we were all tired. We had discussed Disney Springs but it wasn’t happening today. We just headed back to our room for a rest and Phil went for a swim. 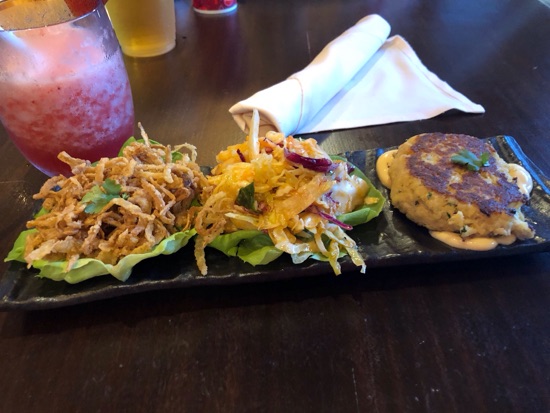 We eventually decided to go out for a meal. There is a lovely looking quick service called Geyser Point about 10 steps from our room, I’ve wanted to try it since we arrived, It’s outdoors but covered and right next to the lake.

You know when you’re really looking forward to something and it just doesn’t meet your expectations. Well, that was this…,

We arrived and were told a 10 minute wait for a table which is fine except there were empty tables. I asked about the empty tables and was were being held, but then told no they don’t take reservations. So I was a bit confused. She then rearranged the tables and we were seated within a minute or two, But by the path and the kitchen, not the lake side view I had imagined. We ordered burgers and crab cakes. And I can’t fault the food, it was delicious. I also had a Strawberry margarita which was good. 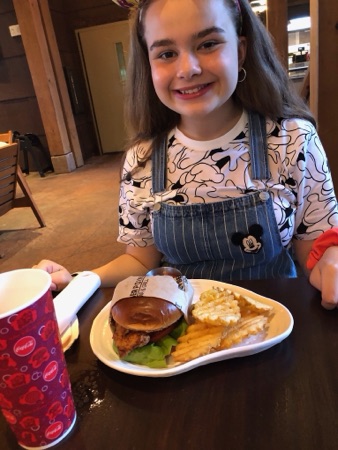 It started to rain. Really hard, and there was a baby crying. We’ve been there with babies crying so I do understand, but it made for a much less relaxing atmosphere then I anticipated. I’d had an idea of some food and cocktails by the lake as the sun was setting Manx we were sitting by the path watching the rain come down… 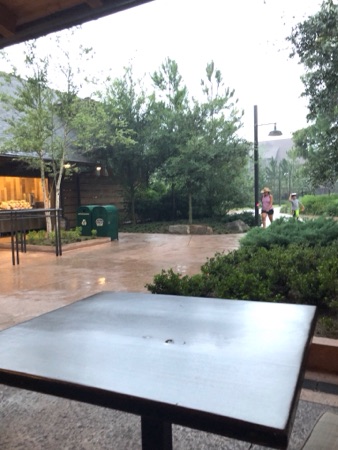 My crab cake was really good, but it wasn’t huge so I fancied dessert. The waiter said they didn’t have a huge dessert menu and mentioned a few things which didn’t appeal so we said no thank you.

Then two minutes later he appeared with a brownie and a non alcoholic frozen drink on the house, It was odd as we hadn’t fancied them so why would we want them? We did eat the brownie which was an ok brownie but it was just all very odd.

It wasn’t a bad meal, in fact the food was excellent, it was just all a bit less than I’d expected, Due to the weather and the table. I might give it another try when it looks less busy. I think a lake side table would make a big difference to the experience.