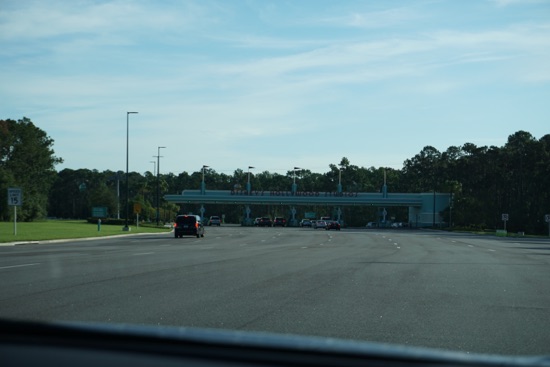 We had some plans for today. A visit to Hollywood studios in the morning, and we we’re meeting some friends at Disney Springs in the afternoon.

We decided to drive to Hollywood as we weren’t sure how long it would take us to get from the park to Disney Springs later.

We were up and out pretty early, And followed the signs to Hollywood Studios which brought is in through the main gates. We have always used the back gates before, but all the roads have changed and we ended up here. Not entirely sure how, but it worked.

We parked really close, and then entered the park and had to wait on the Main Street for a little while. The crowds were really building up and I was thinking we were in for a long wait at toy story mania. Eventually we were all allowed to walk around to toy story land, And the entire crowd went to Slinky and we walked straight into Toy a Story Mania with no queue at all, I was pretty pleased it’s myself 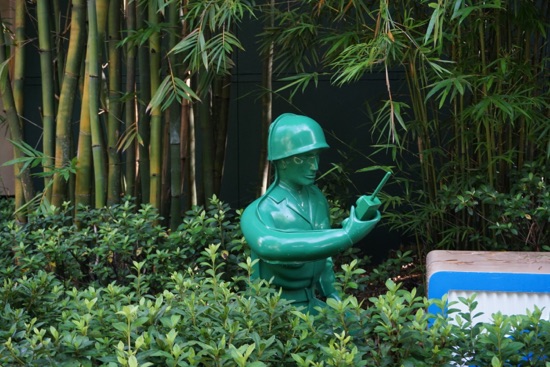 I love this ride, but I’m hopeless at it. Molly was p,eased because she’d beaten me but it’s not hard!

we walked out of the ride. Passed all of the toys in the garden, and decided we would try thto flying saucers which had a short queue as well. 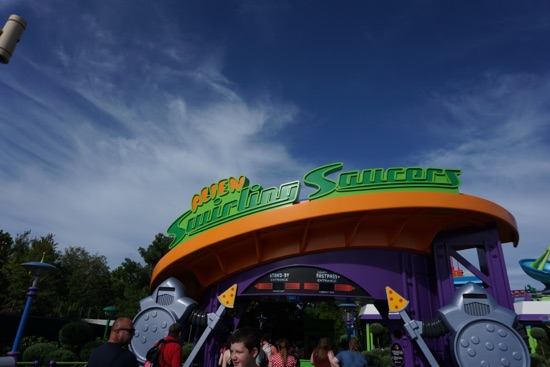 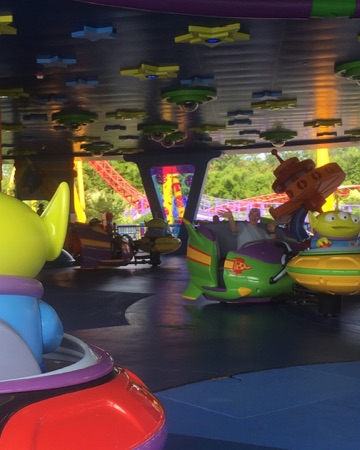 This is quite a nippy little ride, Not as spinny as tea cups but it whips you around and Molly and I were giggling away as we slid across the car.

After this ride it was only 9:30 and we’d done what we had set out to do, so we decided to get some breakfast from Andy lunch box. 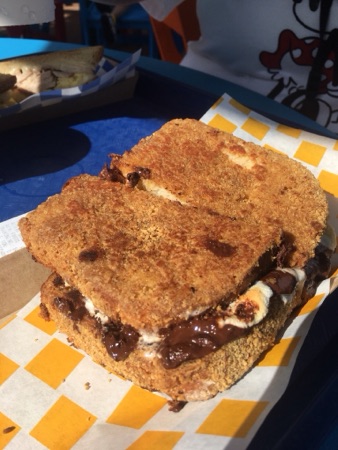 We had a s’more sandwich and a turkey sandwich to share.
They were out delicious but the s’more sandwich is very much a dessert. Really chocolaty and sweet. We all liked our taste but I couldn’t have eaten a whole sandwich.

While we were sat Molly had been on her phone and seen that Jess and Jayne were also In Toy Story land but it was very busy and we couldn’t spot them. 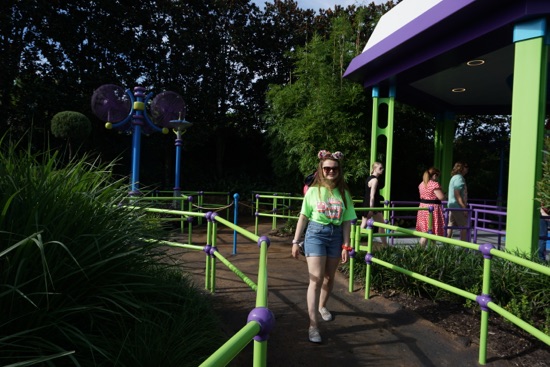 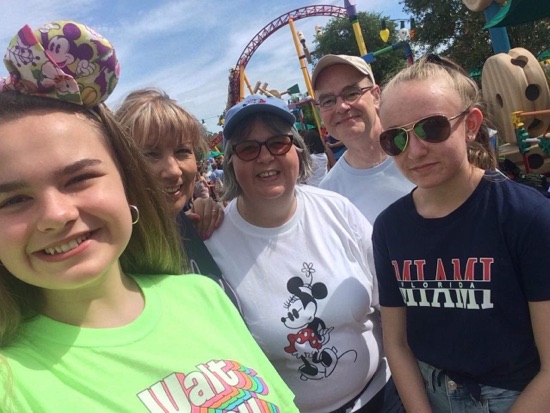 We popped into the bathroom, and on the way out we saw them so we stopped for a quick chat. We already had plans to meet later for margaritas so we didn’t chat long. 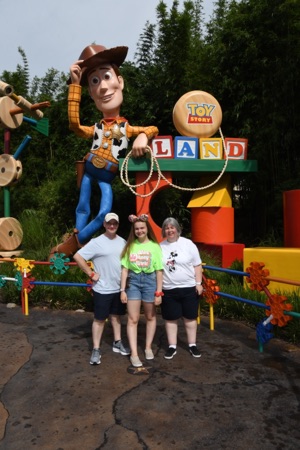 We had one taken at the entrance to the land.
And then decided to look in Walt’s dream. Mike and Sully were I here but with a long queue, so we just looked around and watched the film at the end. 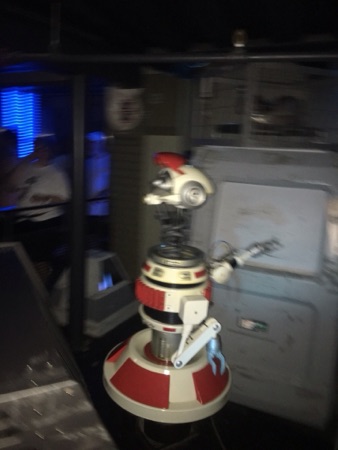 It was time for our fastpass now, so we went to Star Tours. I don’t understand how they are going to leave this out of the new Star Wars area. It feels like it should be moved over there. We were straight in here as well and had a different version than we’ve seen before. With an under water monster grabbing our space ship. 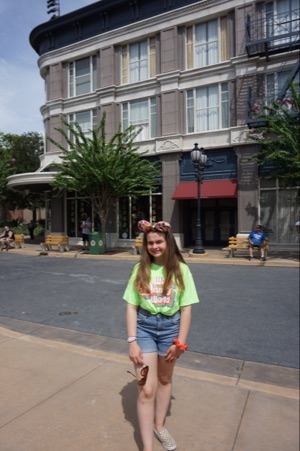 We walked down through the new York Street to Muppets 3D. There used to be lots of these streets but it looks like they are all gone now with just a tiny section remaining. 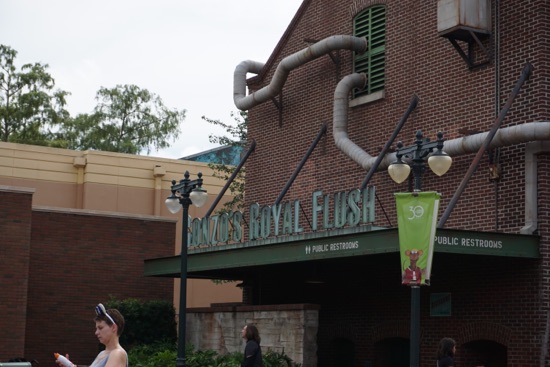 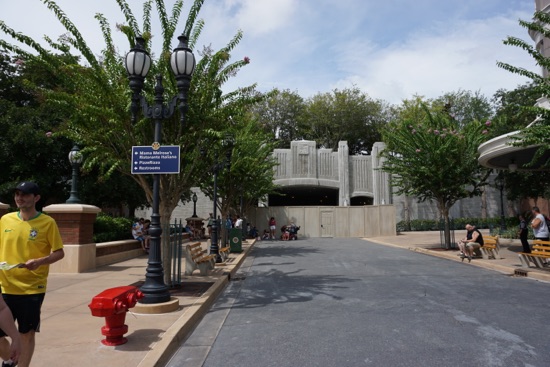 This looks like it will be the entrance to Star Wars. 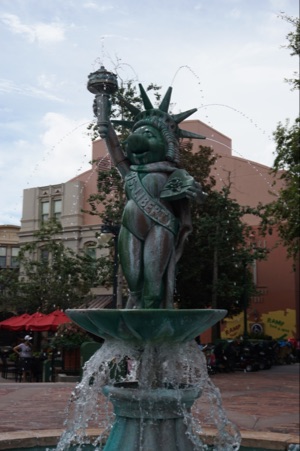 We went into Muppets 3D which is desperately in need of a revamp. It doesn’t help that we have seen it so often we know every line. But the 3D is just not all that impressive anymore, and the scene at end with the the public looks like it was filmed in the80s. 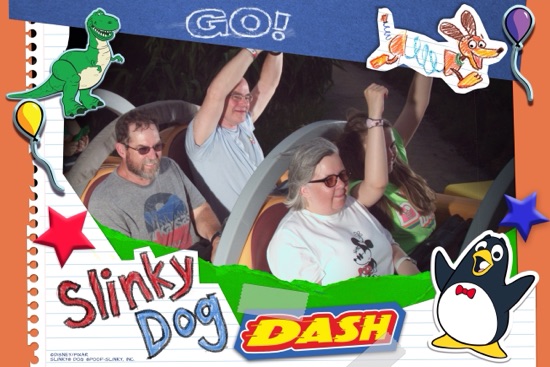 We walked over to Slinky Dog and past the enormous queue. I cannot imagine waiting over 2 hours for many rides and certainly not this one. We went straight I. Th fast pass entrance and straight to the ride, there was no queue at all for fast passes.

We got in the car and I went to put my bag in the net but it was very small and wouldn’t fit, I was still trying to get it in the net when the ride started, so I had to just hang on to it. It’s not a particularly fast ride so it wasn’t a big deal but it was a bit distracting when we first set off.

This ride is cute, but it’s quite slow for a coaster. I think Goofys barnstormer is nippier. And 7 dwarves definitely is. I’m all for kids rides. But i definitely wouldn’t wait hours for this.

After the ride , we headed out of the park as we were meeting friends. 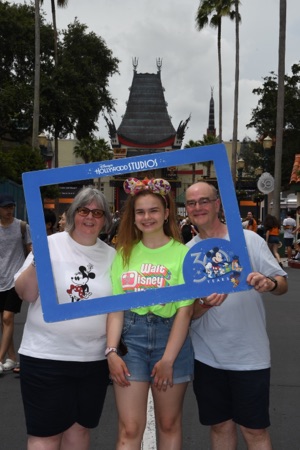 Quick stop for a photo on the way. 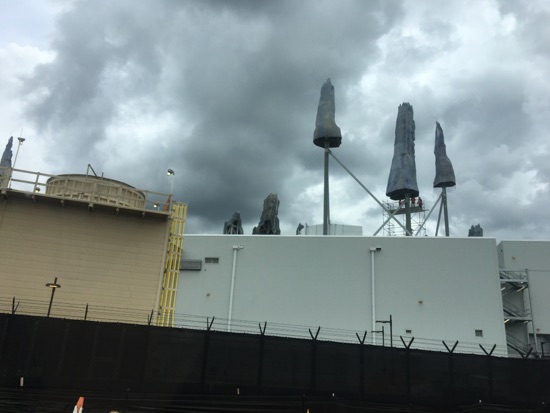 And then we set off for Disney Springs, We exited the car park onto the main road, and then took a wrong turn and took the cast members entrance back into the car park, loads of signs saying cast members only. And a few saying guests proceed to the exit. So we can’t have been the first guests to do this. We could see Star Wars construction but you. Ant really see much. Just some bits of mountains. 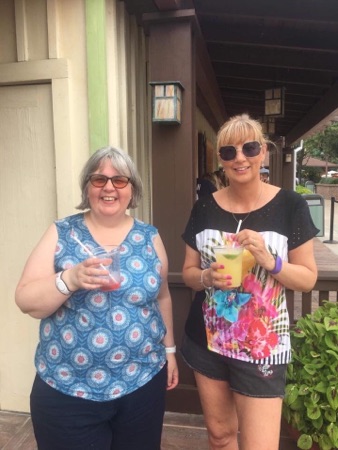 We found our way to Disney Springs and the Grapefruit carpark, and got parked up and headed to the Margarita bar. We found a few tables by the lake and got some good from the cantina truck. While we were sat, the rain started so we went and stood under an awning. I was busy chatting to Jayne and when I looked over the rain has stopped and we’d lost our tables! 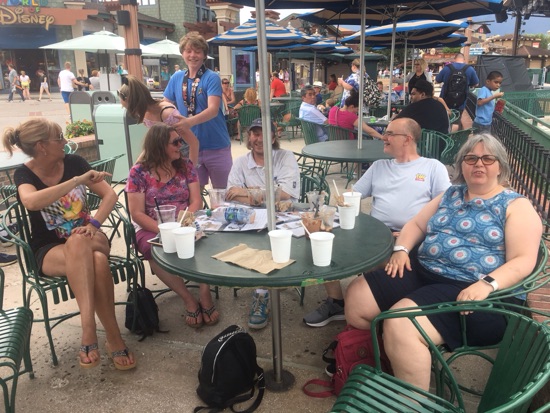 We moved further away from the bar and got new tables by the lake, and met up with Mandy & Joel from the rink. Along with their family. We had some Ghiradelli ice cream, and some margaritas and a lovely chat in the sunshine.
Molly, Joel and Jess went off shopping and we all caught up.

The clouds started to look a little dark, and then the rain started to spit but we though we would brave it out. And then it came down very hard so we made a run for it into the Disney shop. The kids said they were on a bridge across the lake when it started but they also ended up in the Disney shop.

I decided to buy a top I’d been after for a while, and then we all said our goodbyes. We had had a lovely afternoon. 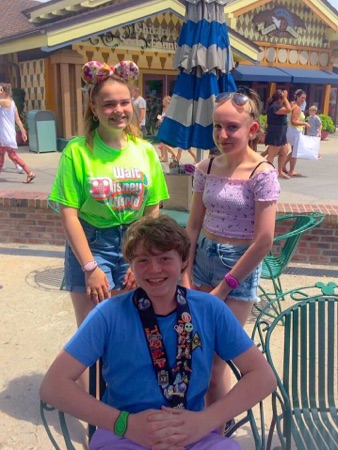 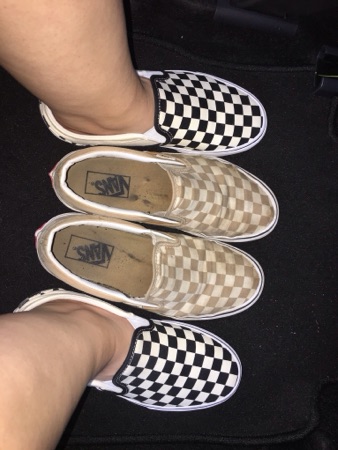 We decided to go to the Premium Outlet and then get some tea. Bizarrely we saw this as a cost saving measure as tea off site would be cheaper than onsite. Of course conveniently overlooking the shopping that we would inevitably do at the shops.

Mollys Vans were looking pretty desperate so she wanted anew pair. It wasn’t until we looked at new pairs that I realised just how awful her old pair were.
There were a few shops offering buy one get one half price, So we were in and out of them all before getting a pair of vans and a pair of converse in Rack Room shoes.
I also bought a new bag in Vera Bradley. We had a look in the Character Outlet. Loads of princess dresses but we are no longer in the market for princess dresses…

Then we stopped at Sweet Tomatoes for some tea. It’s not fancy but always good when you fancy some veg and we’d reached that point in the week. I had a coupon so it was $11.99 including a drink.

We went back k to our hotel and Phil and Molly went to the gym, Molly initially went by herself but she needed an adult so Phil joined her. 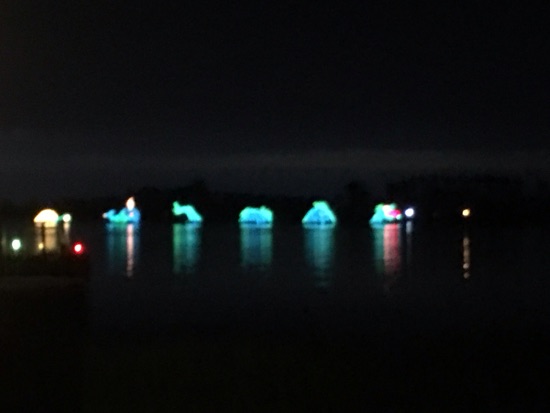 They saw the water pagent on their way back. We can hear this from our room each evening.