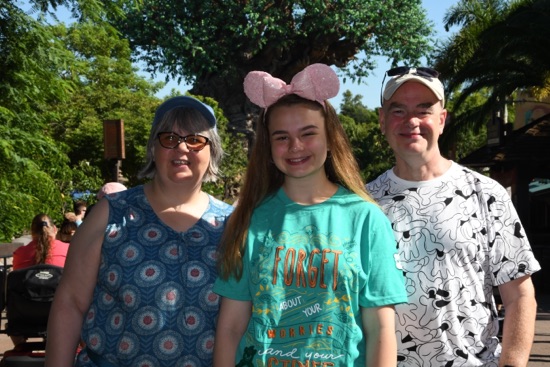 We aren’t waking up so early anymore, and so we finally headed out of the room towards the bus stop a little after 9, We just missed the Animal Kingdom bus so we had to wait for the next one, because we’d just missed the bus we found a seat on a bench, However that meant when the next bus came there were lots of families standing closer to the bus stop than we were. I was a little worried we wouldn’t get on, but fortunately we did, although molly had to stand.

We got into the park about 20 minutes before our fastpass time, so we got some photopass pictures taken. 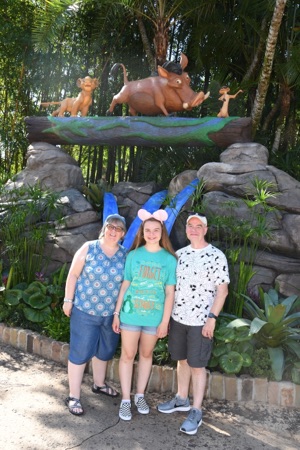 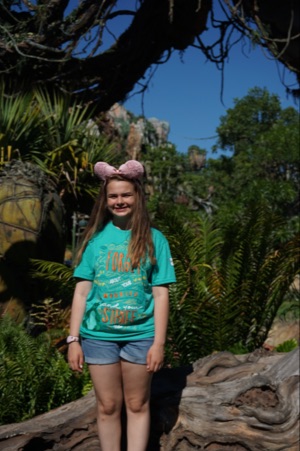 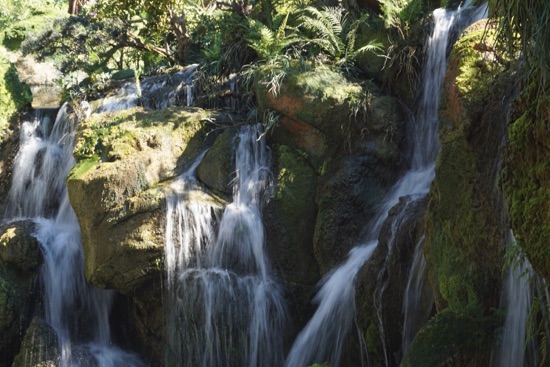 Then we took some in Pandora itself 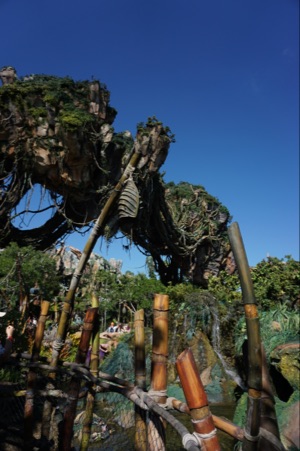 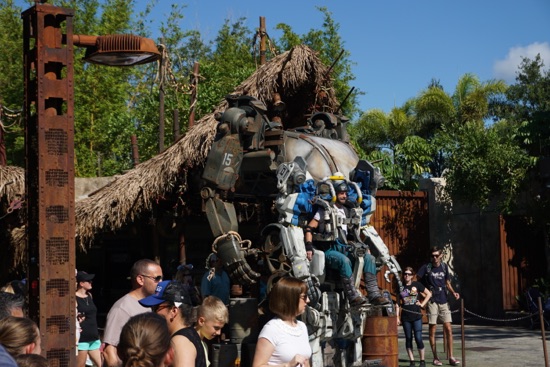 And we watched this guy in his suit for a little while. And then it was time…

We walked straight in and to the ride, No queue at all. The standby queue looked pretty huge although I didn’t notice the time.

This is as good as we remembered, although I wouldn’t wait hours for it. You do get an amazing sensation of flying 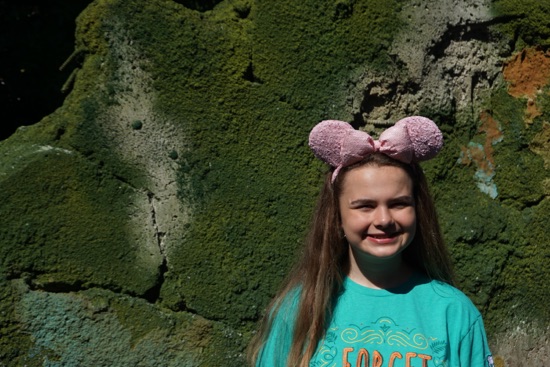 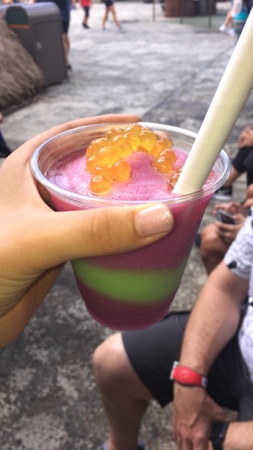 After our ride, we had a drink. This is the speciality drink in this area. I think it was pear and apple. It was quite nice, although one to share was plenty. 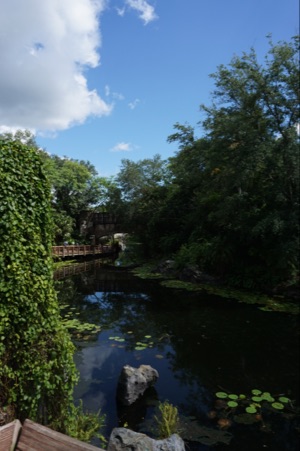 We walked along the path to Harambe, and I took a lot of photos. It was quite peaceful and pretty and you could forget it was a theme park. (Briefly) 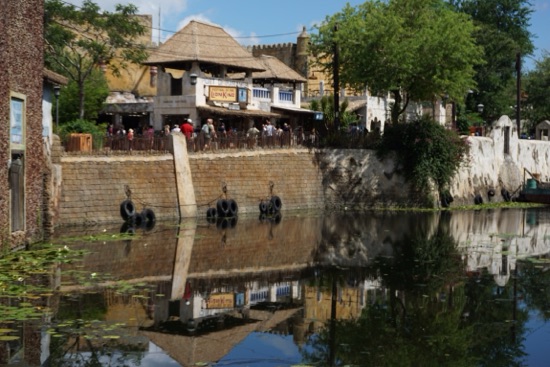 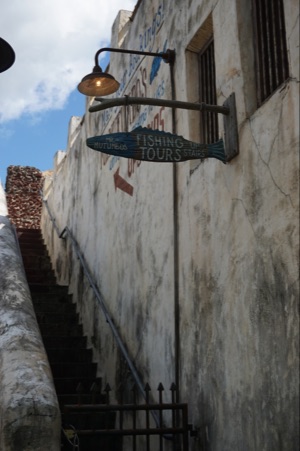 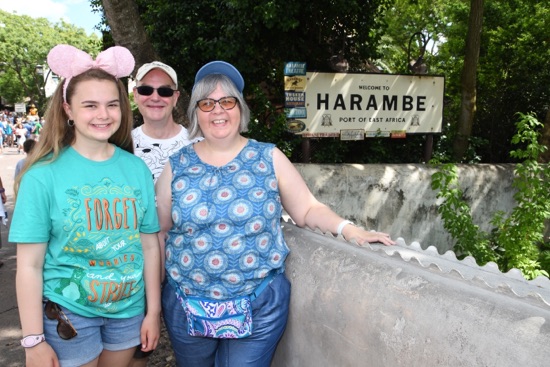 We stopped for another photopass and asked the photographer where the next Instagram wall was, We would not have found this one on our own, it was tucked right away ear a cast member exit 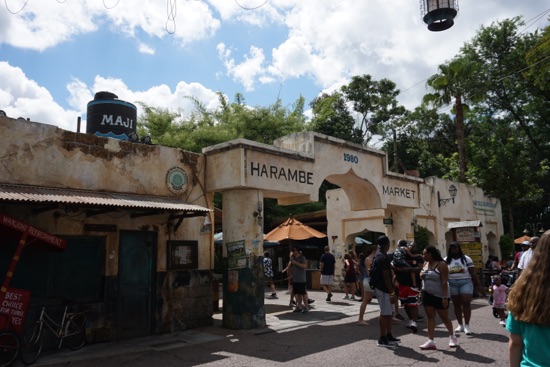 It’s in this food court area which I don’t remember seeing before, We didn’t eat here but the theming was amazing. It has a very ramshackle feeling. 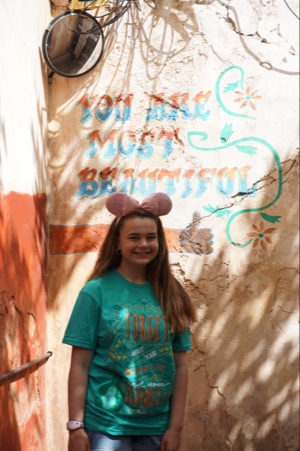 We found the wall, but the sun was very bright so it’s it’s not the best photo. 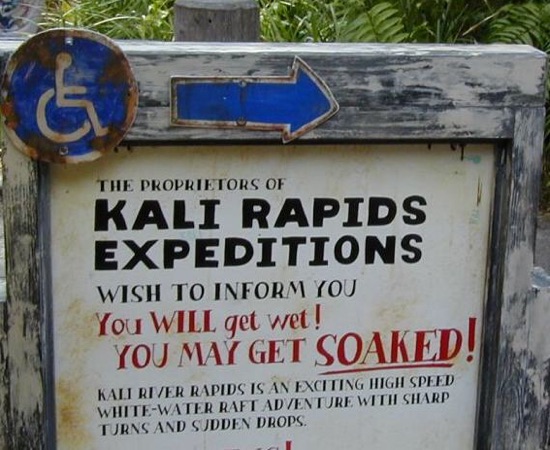 This is not my photo but it is my experience. I’m always the one who gets totally drenched. And today was no exception. I won’t wear a poncho. As whenever I have the water just goes in the poncho but I did feel like I was exceptionally wet. 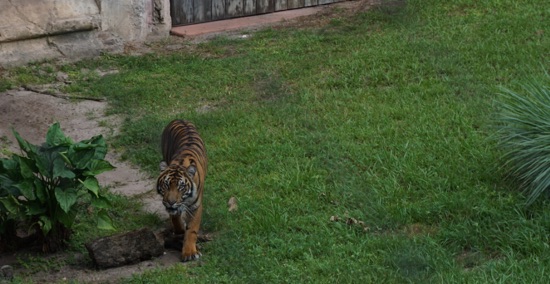 I went into that bathroom in a vain attempt to dry off under the hand dryer. My top dried a little but my shorts were soaking.

We decided to walk around the animal trail and dry off, While we were walking around a huge black cloud appeared and it started to rain. It wasn’t particularly heavy but with wet clothes on I was actually cold. Not what I was expecting for today… 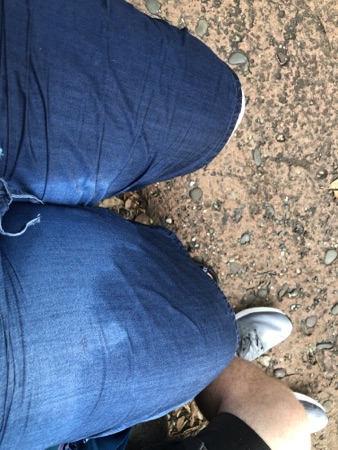 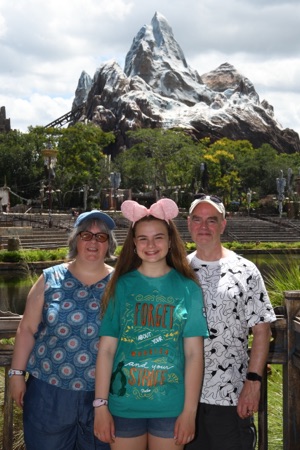 We had fastpasses for Everest, So that was our next stop. Phil rode with molly while I had a seat in the shade. 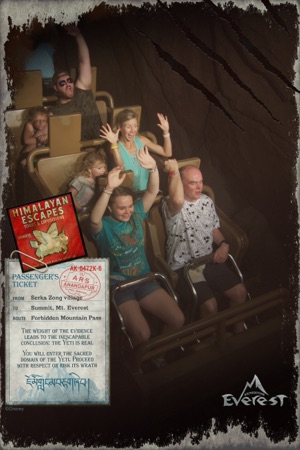 One of them appears to have enjoyed it!

Molly then used my fastpass and rode again.

We were starting to get hungry so we went to yak and yeti for some lunch.
I have a Landry card so we were seated right away. We overheard a 50 minute wait, so I was quite pleased with my card. 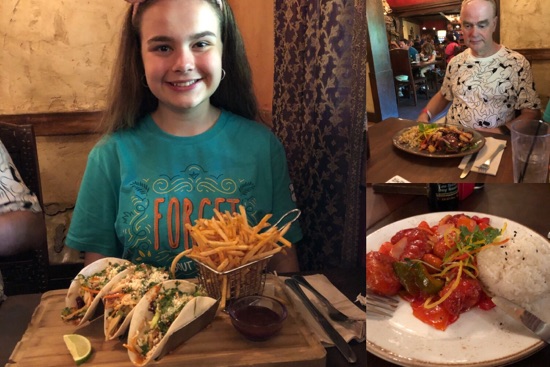 Molly had tacos, Phil had teriyaki beef and shrimp and I had sweet and sour chicken, it was all very good but Phil’s beef and shrimp was superb. I’d have that if we went back.
I had a $25 reward but wasn’t able to combine that with our dvc discount. We haven’t had many discounts this year. Some years I feel like we get them everywhere. 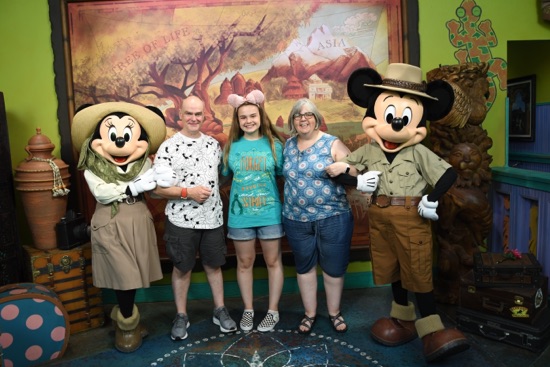 After lunch we went to see Minnie and Mickey, and while we were waiting I managed to get a fastpass for Nav’i River. These had been popping up for 8pm but I saw one for 3pm which was perfect so I was pleased to get that.

We walked past Kevin 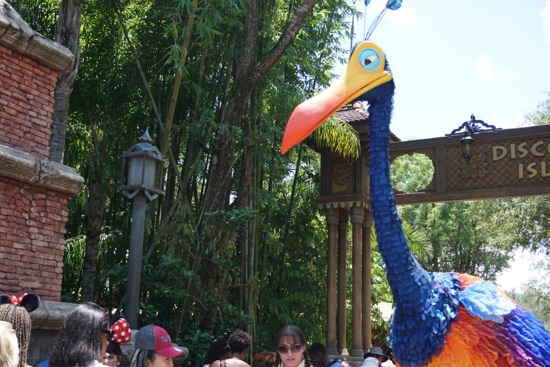 And around to the Nemo show, Still a favourite of mine. 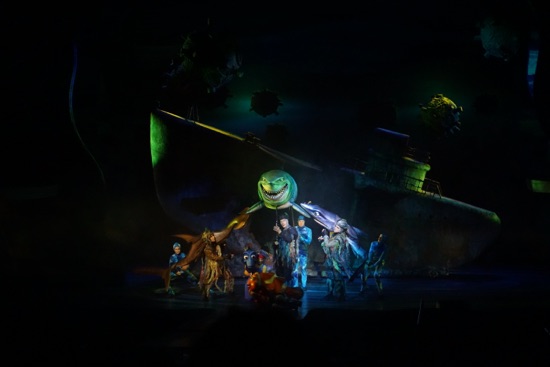 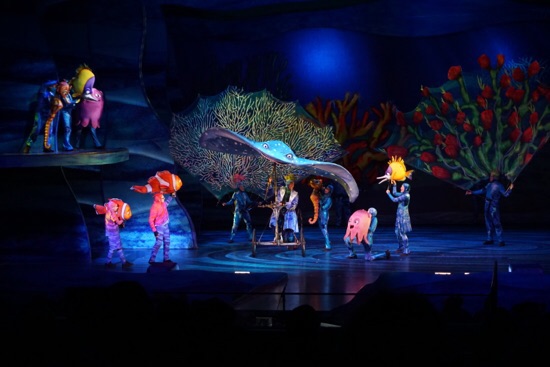 It was absolutely packed in here but we did get a seat. This show is just stunning. I’d love to see a full Broadway production. It’s 40 minutes long and it was over so quickly. 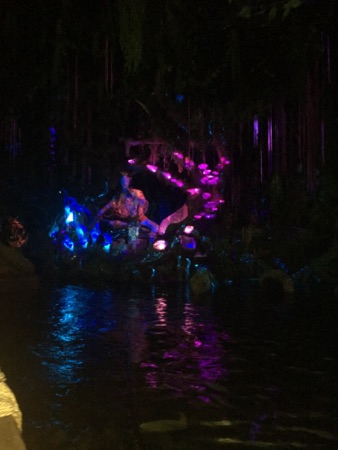 This is very pretty, It’s not a thrill ride. More it’s a small world without the song, but I like it.

It was nearly 4pm so we decided to call it a day and we went for the bus back to our resort. We had plans to meet Jayne and Jess for drinks this evening. 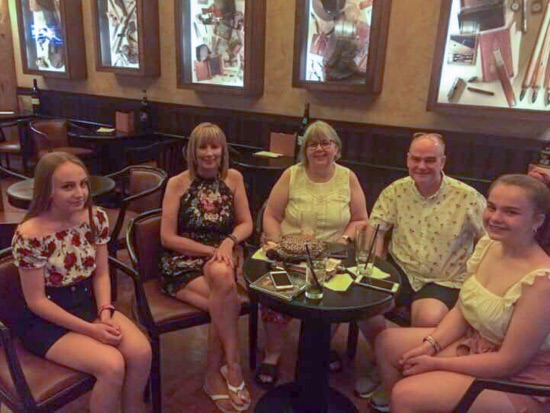 We met them in the bar at wilderness lodge and had a lovely chat before they went to Artist pointe for dinner.

As we walked out of the bar the most almighty storm was raging. 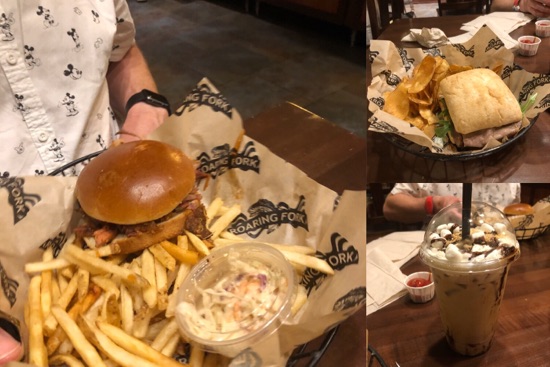 We had a chat with the lifeguards who were inside and they seemed pretty impressed with the storm, they don’t normally come inside.

We had dinner in Roaring Fork, Pulled pork for Phil and Molly and roast beef sandwich for me. Molly and I has iced S’more latte’s which was very nice too.

After dinner the rain had stopped so we were able to walk back to our room outside. Our room was just across the courtyard but it’s miles via the corridors. 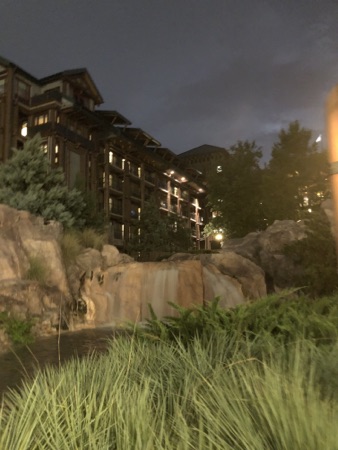