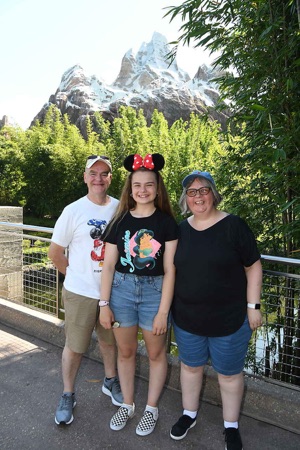 Molly has been wanting to do 4 parks in one day for a while, so we agreed we would do it on this trip. I have to a admit I wasn’t looking forward to it.

We set two rules, A ride and a photo pass in every park, plus molly took a Polaroid photo in each park.

I left everything in the room and we just had my magic band and my phone. So we had no bag checks plus it was just less to carry.

We were all ready to go at 9:24 (which was later than planned) and I checked and the next bus as due at 9:28. I didn’t think we’d catch it but we got their with time to spare. The advantage of a ground floor room.

First stop was Animal kingdom. We had a few fastpasses. And because we wanted some later in other parks I thought we needed to do all three. I’m not entirely sure if that’s truer. But we did them alll 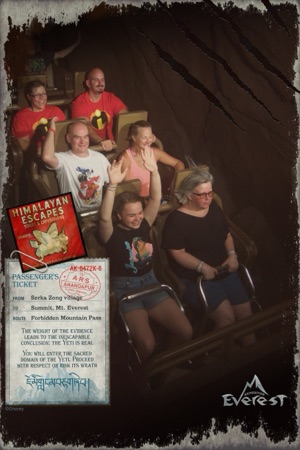 We started by walking to the safari, as I thought we might be able to standby there and use the fastpasses later but the queue was 50 minutes so we went round to Everest and used our first fastpass. This isn’t my favourite ride but I did it for moll. I wasn’t putting my hands up though! 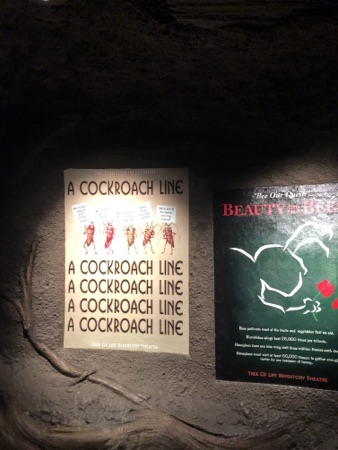 In the queue for Everest I’d pulled forward it’s tough to be a big, you don’t need a fastpass for this but as we were trying to use three quickly I took it as it was the earliest fastpass I could find.

This was really busy but the fastpass was pointless as we merged with the regular queue before it got busy. We did have to wait though which is pretty unheard of, and the theatre was absolutely full.
I think the parks are busy but also by putting fastpass on the rides it’s actually increasing th demand for the ride. The fastpass was certainly the reason we went and we can’t have been alone,

This show was particularly good as most of the audience had never seen it before so there was genuine laughter and surprise at the jokes. Which made us laugh as they are old corny jokes and we have heard them before. 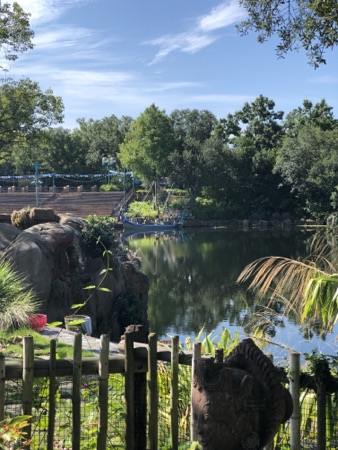 While we had been waiting for tough to be a bug, I’d been playing with the fastpass app and picked up a Nav’i river fastpass. Not the most exciting ride. But it fulfilled the criteria of being soon so we could tick off our three and move to the next park.

We had spent a lot longer in AK then we had intended and we were really really hot. We got some ice creams on the way to the bus and had to eat them very quickly as they were melting faster than we could lick. 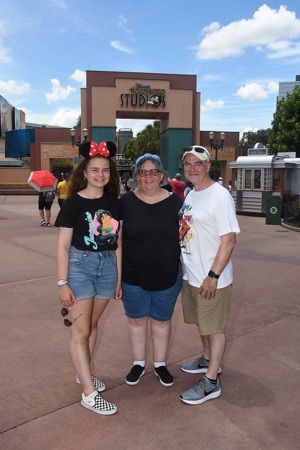 We just missed the bus to Hollywood studios so we had to wait ages, but eventually it came and we made it there. We had a fastpass for Toy Story Mania, Molly wanted photos of Muppets 3D and Tower of Terror and we wanted some lunch.

We started with lunch… 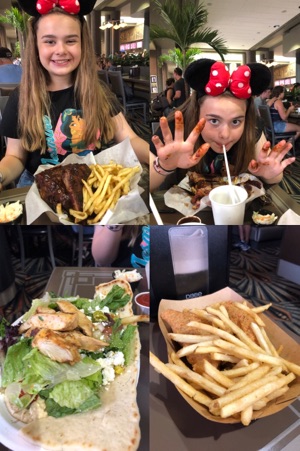 We did a mobile order for ABC commissary and went into look for a table. It was heaving. Everyone was walking around looking for tables, if we hadn’t done the mobile order we would have left.
Eventually we got a 2 seater table for the three of us and found an extra chair and waited for our order to show as ready.
It took ages but it was eventually ready, and when I went to collect she said they’d made Mollys ribs fresh.

Molly ended up covered in ribs. She said they were ok but not the best ribs she’d ever had. I think possibly the messiest.

We went over to Muppets 3D to use the restroom and cleanup and also molly took her Polaroid. 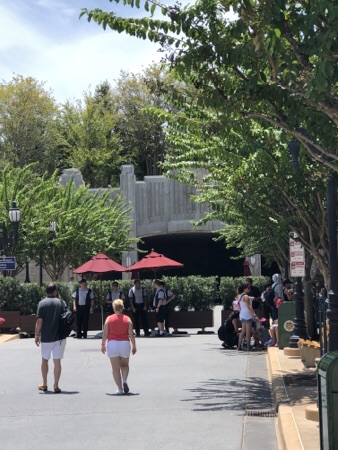 Something was going on at the entrance to Star Wars. We’d seen a wall here last week but it was down and the entrance blocked off with bushes. And loads of cast members were in the area. Not obviously doing anything. I was very curious…

However it was time for Toy Story Mania. So we went over and rode that, Did our photopass photo and then it was time to move on.

We had to walk miles to the boat dock, all the park entrances are having work done and there are hedge walls everywhere redirecting you.

Luckily we just caught the boat which was in the dock as we walked up.

We took the boat up to the hotel and when it stopped st the boardwalk we were all tempted to get out and call it a day. I don’t think Molly would have taken much persuading but she said she wanted to see it to the end. Me. I’d have got off in a second.. 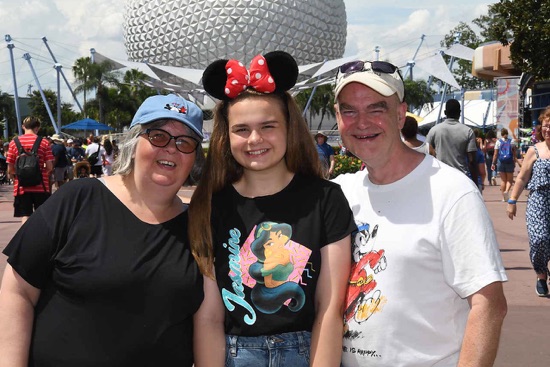 We had a very quick trip through Epcot. We walked from the International Gateway to the monorail, stopping for a cool down in MouseGear, a photopass and a ride on Spaceship Earth, and then we left and went for the monorail. 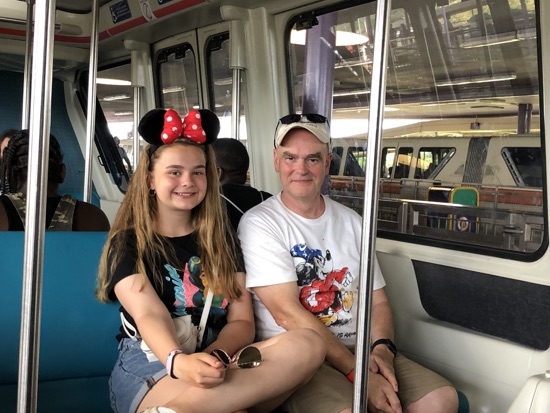 We got the monorail to the TTC,and then another to a magic Kingdom and then went straight to the park entrance without a security check.

I was questioning our sanity st this point as I think it was the hottest day so far.
We were straight up Main Street and into Starbucks for the largest drinks we could get. You can’t beat a Strawberry Açai when you are melting… 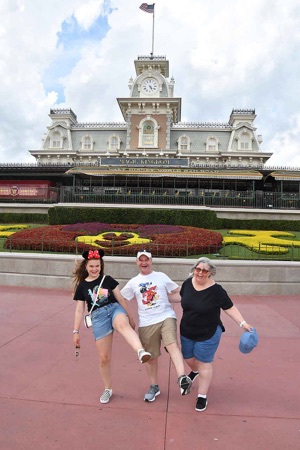 We did stop for a photo on the way in. The photographer told us to fly. We have no idea why, or how to fly. It makes for a random photo! 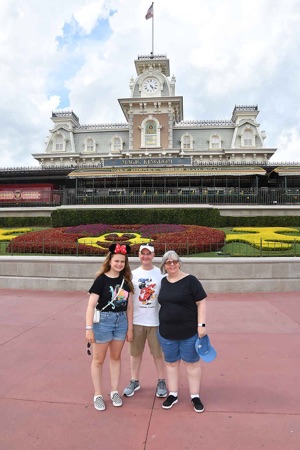 We had a normal one as well.
after Starbucks we headed round to Pirates for our last ride of the day. If the photo appears I will add it, some of the ride photos have been slow to appear. Molly has organised us especially to all look at the camera at the appropriate moment so we’d get a good shot. 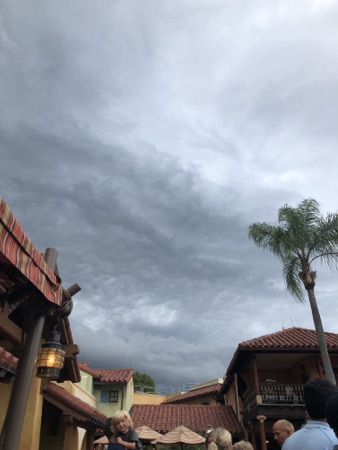 When we came out of pirates the sky was dark and everyone was talking about storms. We decided it was time to go, although we were quite refreshed with the drop in temperature.

We headed out of the park pleased with our achievement but all absolutely knackered and Not entirely convinced it had been a good idea! ? 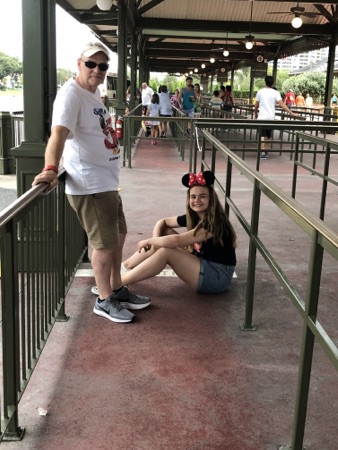 We made it back to the bus and the resort without encountering the storm. Phil and I hit the sofa. ,
Molly? She went to the gym…