I don’t have many photos from today.

We started the morning at the pool. I grabbed some loungers in the shade but it wasn’t that hot that it really mattered.

We had a swim. Molly and Phil played ping pong, I read my book. It was quite relaxing.

We had just walked around to the dock when the sky turned black and the heavens opened. The boat docked cut announced it wasn’t running due to weather.
We ran to the shop to discuss our options and were pretty wet just getting there.

We stood and looked at the rain for ages and then it eased off a bit so we decided to walk.

We were just on the bridge to Yacht and Beach when it started again. There’s absolutely no protection here so we couldn’t hide. We just had to embrace the rain. 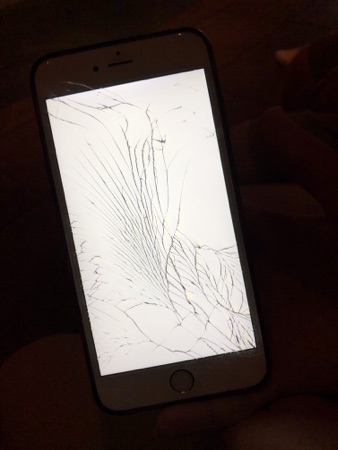 We entered the park at the international gateway. The Cast members here were using handheld readers so they could stand under an awning rather than the more exposed ticket readers they usually use.

Molly was laughing and spinning as we walked in the park and her phone flew out of her pocket and smashed.
She was pretty gutted. Especially as it didn’t seem like a big fall and it landed on its case. Phones are strange. Sometimes you are sure they are smashed and they are fine and other times to a tiny drop that breaks them. 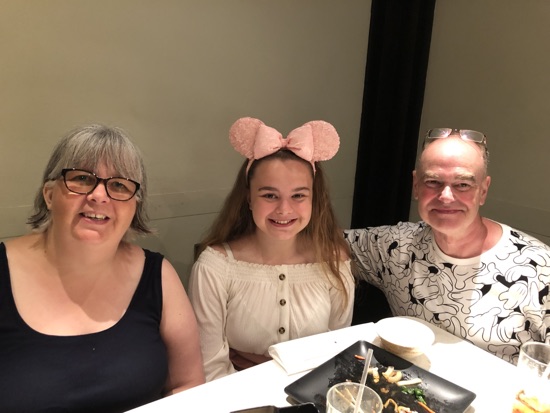 We made it to the Tappan Edo and were only a few minutes late. It’s shared tables here and we were sharing with 5 younger students? Who I think were Italian.
They ordered wine and had to show ID and a photograph of their passport. It’s a long time since I’ve had to show ID but they were very thorough checking them all.

The students then ordered about 4 starters and 1 main meal to share between 5 of them. The waitress wasn’t particularly impressed although she didn’t say no. Since it’s the sort of restaurant where they cook the main meal on the table I wasn’t entirely sure how this was going to work.

The chef came out to start the cooking / performance and they asked for steak as well. He wasn’t very happy with them and told them they hadn’t ordered steak but he did get it for them. I think they had planned on ordering additional items throughout the meal but this restaurant doesn’t lend itself to that at all. 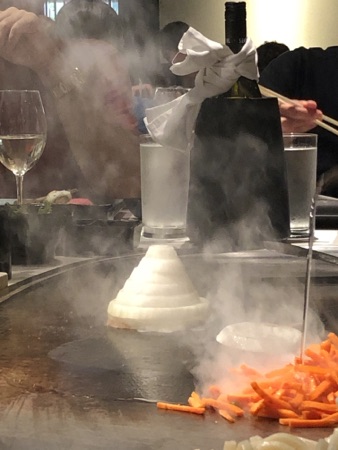 I had steak and chicken, Molly had steak and shrimp and Phil had filet mignon. The filet was delicious and definitely a step up from the regular steak.

We had all the usual tricks with the onion tower and the throwing of the knives etc. 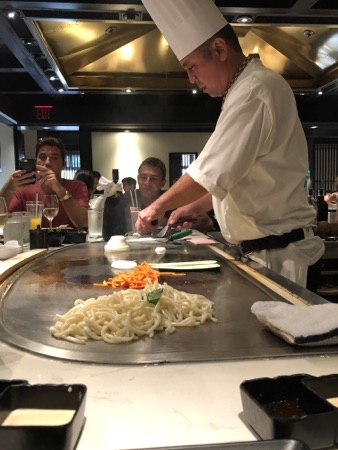 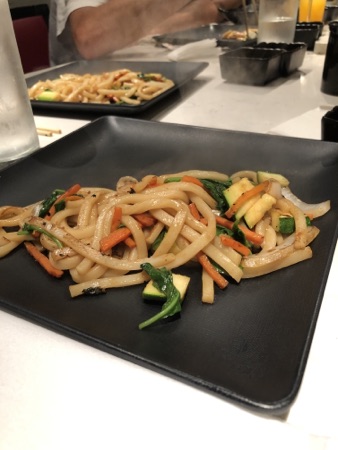 This was all absolutely delicious. One of our favourite meals and actually not all that expensive considering how good it was. I don’t know why it’s so long since we’ve eaten here.

After the meal was over it was raining really hard. We were able to get the lift down into the shop and then we had a little look around the shop.
We hadn’t been in there long when Joel and Mandy turned up. Dripping wet. Steven and Aaron followed when the rain had settled a little although they certainly weren’t dry.

We had a chat for ages about our holidays and then thought perhaps the rain was easing so we set off to walk around the world showcase.

We had a debate. Did we just head back to the hotel or did we try and see something. We have hardly seen the world showcase so we thought we’d try and walk around. Well we didn’t get far when the rain returned and we were drenched. Thy kind of drenched where you just have to laugh because what else can you do. 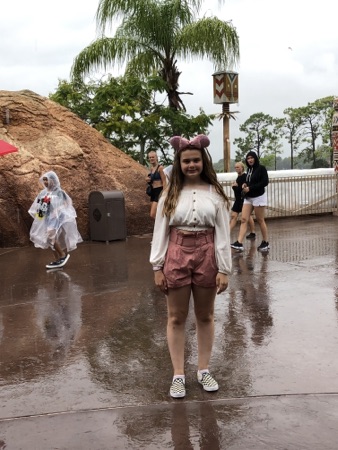 It was a bit of a lost cause now. We didn’t want to go in any of the pavilions as they were air conditioned and it was cold when you were wet. 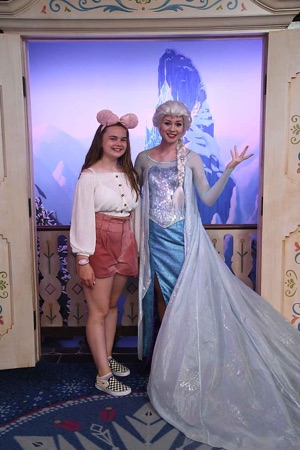 Anna and Elsa has no queue at al. We’d spoken to someone the other day who said they had once queued 5 hours to meet them! So we thought we’d pop in with no queue. However the a/c was at full blast and we truly were Frozen. 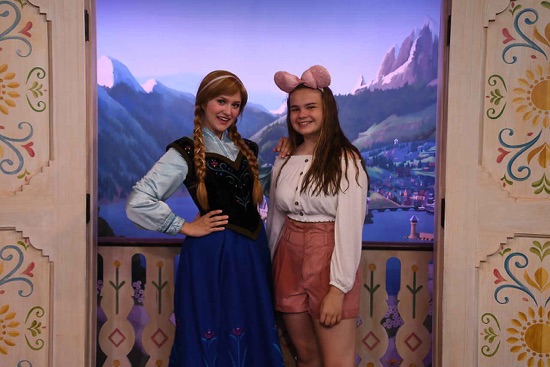 At this point we knew it was a lost cause so we just headed for home. We were absolutely dripping by the time we go in. We even put the heating on and Pajamas and climbed into bed to warm up.

We had an evening reading. And watching YouTube on a cracked screen and eventually Phil went out to get hotdogs and cake from the Boardwalk. 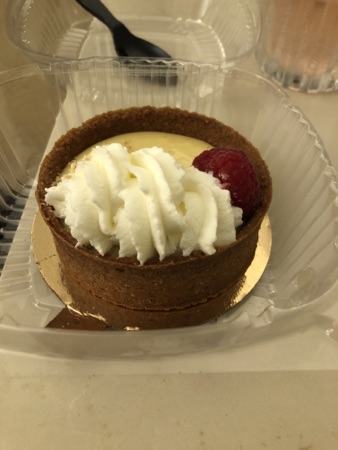 I had a key lime pie which was rather delicious.