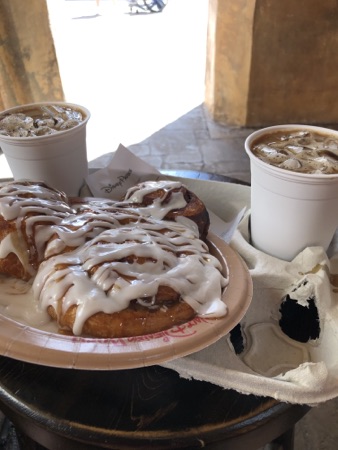 We have 16 nights rather than your typical 14. Just a little extra to compensate for our longwinded travel days. So we are now officially on borrowed time.

We have a Flight of Passage fastpass so we are up and out to Animal Kingdom. I had hoped we might see the safari but by the time we get there the safari has a long line so we opt for a cinnamon bun instead. We got it from Kusafari and found a little spot to sit in the shade just around the corner. 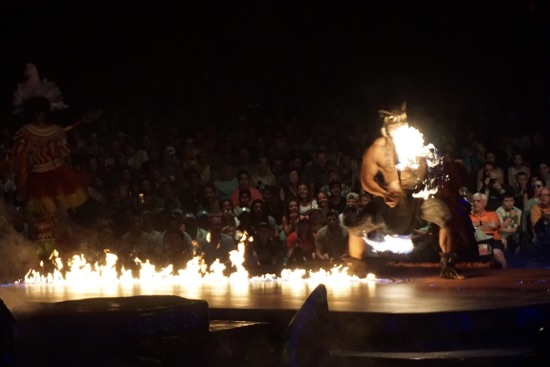 After our snack we went into see the Lion King. We were lions. We have never been a warthog and wonder exactly how early you have to arrive to be in the warthog section. We don’t generally arrive very early so we are destined to be Lions. Or Giraffes. Once again the person asked didn’t know they made a low bleating sound. You think word would have got out by now. Molly and I pondered if we would say we didn’t know or if we would give the smart Alec answer.

I had a play with my camera and took a few photos but for some reason I couldn’t decide if they were in focus on the back of the camera so I spent more time messing with the camera than taking the photos. 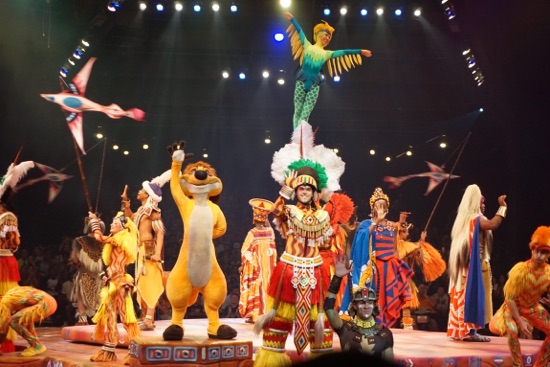 After the show, we headed straight to Pandora along the lovely path by the river. I like this spot as it feels very tranquil. 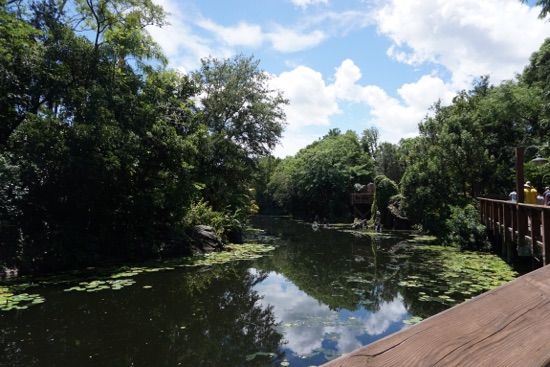 We made it to Pandora and used our fastpasses. There was a small child in front of us who looked too small to me but there was some other discussion going on at the gates so they just scanned in and went on. The little boy did. It want to ride and was crying. It made me quite uncomfortable as while it’s not a particularly scary ride it is pretty intense and I think it would be scary if you didn’t fit in the seat.
We ended up in a different queue so I don’t know if he rode in the end.

We were sent through into the decontamination chamber and the video started and then it went into some sort of problem mode. Where we had to wait for a while. I can’t remember exactly what was said but we were all looking around wondering what was happening.

Eventually we were through and onto the ride. We were all strapped in but there was a commotion coming from one of the other rooms. We had to wait ages until the ride started.

Eventually we were off and it was as fantastic as before. Just really immersive and an amazing sensation of flying. 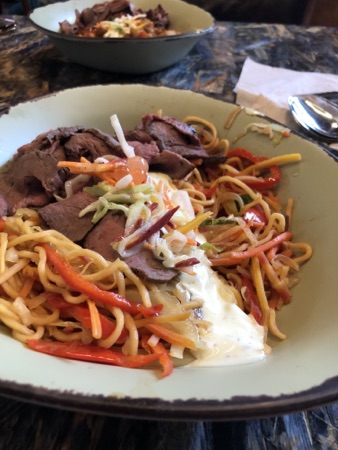 It was over far too quickly and we returned to reality. We were hungry so we did an online order for Satuli Canteen and our food was ready almost immediately. This place is really good. Molly and I had beef and Phil has chicken. This is beef and noodles with the creamy herb sauce. Phil and I had the potatoes. It’s one of the nicest quick service options in the parks. 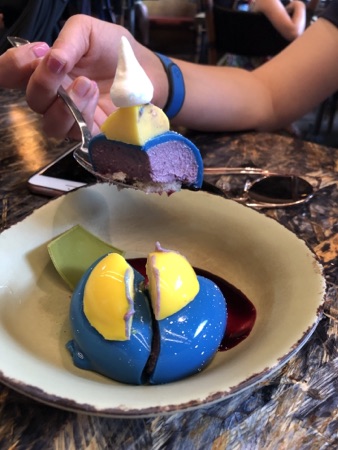 To finish we shared a blueberry mousse dessert which was lovely.

We didn’t board the train until 2:20 so I assumed we had missed it. But we arrived right at 2:25 and Molly powerwalked down to the building and they were just letting the last few people in so we managed to get a seat.

We drew Timon and then we walked around and did a Standby and drew baby Simba. We used to love this at Hollywood so we were pleased to do it here. I don’t think you definitely need a fastpass as a lot of standby people seemed to get in each time.

We decided to call it a day and got the train back To Harambe and walked out of the oars. 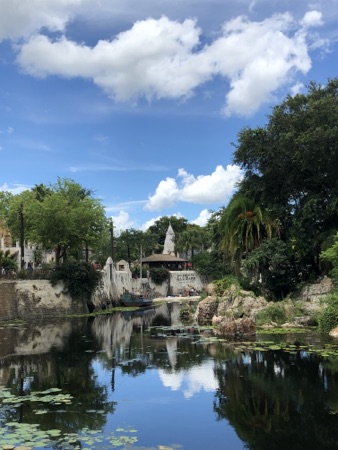 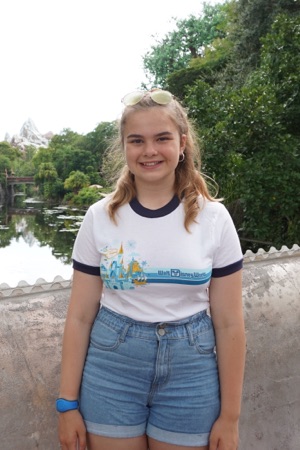 We were almost to the exit when it started to spit and then the Heavens opened. It was torrential. We managed to get under an awning and we just had to wait it out.

A Family appeared who had been on Kali River Rapida when the rain started. They looked like they been in the pool
fully clothed. 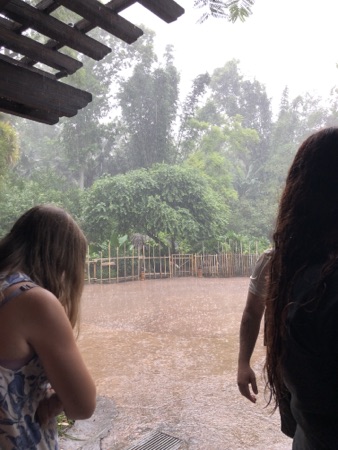 We waited it out and it did slow down fairly soon. So we made a run for it and got the tram to the car. We wanted a quick trip to Target and then something to eat.
We went to a new Target. Just by the Sherbeth Road exit. We liked it better than our usual target but I couldn’t find a bag I liked. I want one with a strap so attach it to my suitcase for the airport.
I gave up in the end and we went over to Applebee’s. And d favourite. 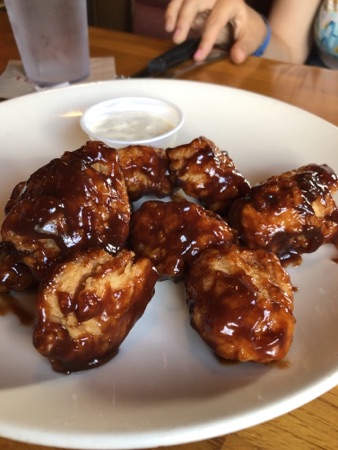 We always start with the boneless Buffalo wings. Which are actually chicken nuggets in bbq sauce. But tasty all the same. 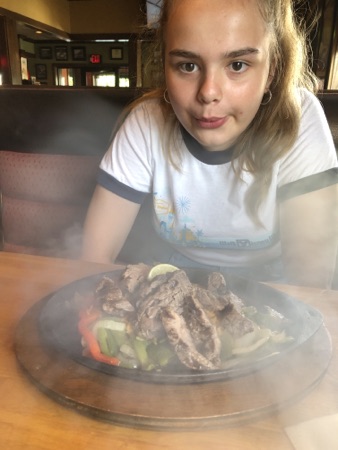 Molly has fajitas, Phil had a salad and I had some salmon. I was ready for something lighter. 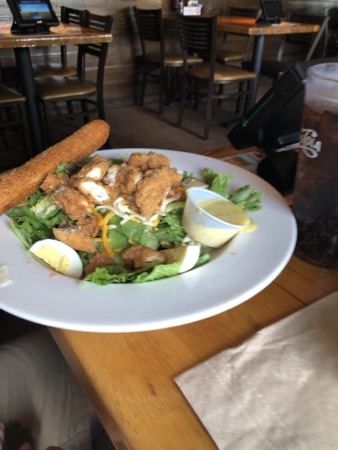 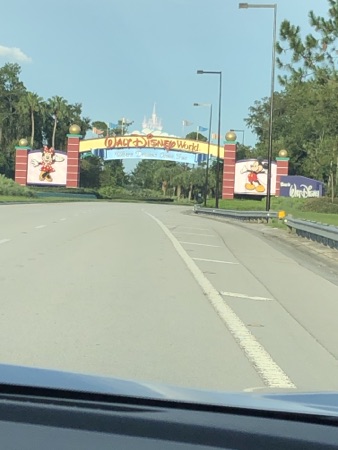 We came out of Applebee’s and came back into Disney along the Western Way. We have never used this entrance before so I think now we have used all the Disney gates. It was definitely easier than going along the 192. 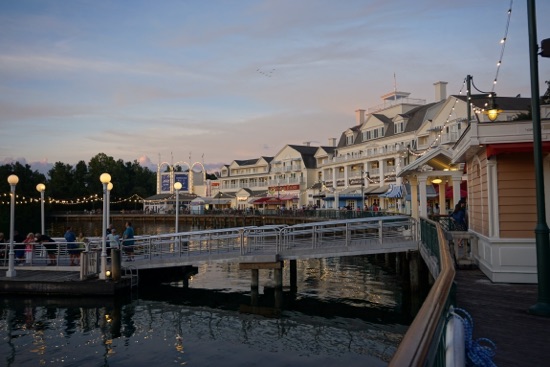 Back in the room we started to pack. Not my favourite task but we needed to see if it would all fit back in (which it will) and also sort out the wet clothes from the rain and get them washed and dried so we could pack them.

A mundane end to a good busy day.