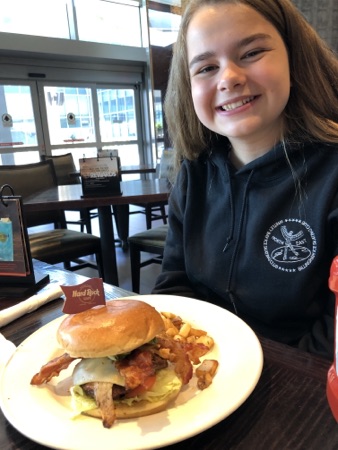 I don’t have many photos but I wanted to just wrap everything up with our journey home.

Our flight out of Tampa was at 14:40, but we didn’t really know how long it would take to get to Tampa and deal with security etc. So we were packed and on our way by 9. In hindsight this was a little early.

It’s a straightforward route to Tampa along the I4 but the traffic was heavy with lots of lorries and in Tampa itself we got cut up numerous times. I was a nervous wreck by the time we got to the airport.

We followed the signs to car return and dropped off the car with Alamo with no difficulties. We got a train to the main building and then a lift downstairs to find the check in desk. We didn’t have any bags to check in but I wanted to print out our boarding passes.

We found a machine and were able to print them out with no issues. We had &lsquo;basic’ tickets so we got our seat assignments for our first flight to Atlanta but for our London flight it said assigned at gate. We were sat one behind each other on the Atlanta flight which was fine for a short flight.

It was only 10:30 so we decided to get some breakfast and we opted for the Hard Rock Cafe. Our thought being it looked like the slowest option…

This was quite tasty. Molly has a breakfast burger, I had a scrambled egg croissant and Phil has eggs and potatoes.
It was all very tasty and we had a very chatty server who was telling us all about the various Hard Rock cafes around the world.

After breakfast we had a gate assignment so we headed through security and found our gate. We found Delta consistently good with information. Gates announced early so you can get yourself settled. Notification when we had a delay and options to fix it on the app. Just all really helpful.

We had a wait for our flight but they had power sockets everywhere so we plugged in and read / watched YouTube etc.

Before the flight boarded they asked for volunteers to check their carry on bags. We didn’t need ours on board we just carry on because we are cheap, so we were happy to check them. It meant we didn’t need to deal with them in Atlanta.

We boarded and had three middle seats. Me then molly and then Phil a few rows back. That was absolutely fine as it’s a short flight.
They have seat back TVs even on this short flight but I couldn’t make mine work so I just read. It was quite a
Bumpy flight and I didn’t enjoy it at all. I don’t mind flying but I don’t like turbulence even though I know logically it’s safe.

At Atlanta we had to find out way downstairs to the train and change terminals and then I had a text from Delta with my gate so we went straight there. I also got a text as each bag was loaded onto the flight. I just found the communication very good all the way through the process.

I also received our seat assignments via the app. 2 seats together and one directly behind. That was fine for us.

We didn’t have a long wait in Atlanta and then we boarded. Molly and I were sitting next to two girls (late teen / 20s) who were desperate to swap seats so they could sit with their mum. It didn’t work for us to swap but a man came from the mums row and sat in our row and they were able to move down there. So there were now 3 seats in our row. Phil was quite happy in his seat which had an empty seat next to it. And I also had a spare seat so we were quite comfortable. Just before takeoff I noticed the man was gone and they were moving a lady into that seat. I think tye man had been moved to Premium Economy. I have no idea why all the musical chairs but was amused that we had only got a last minute seat assignment and we ended up with two spare seats which made the flight much more comfortable. 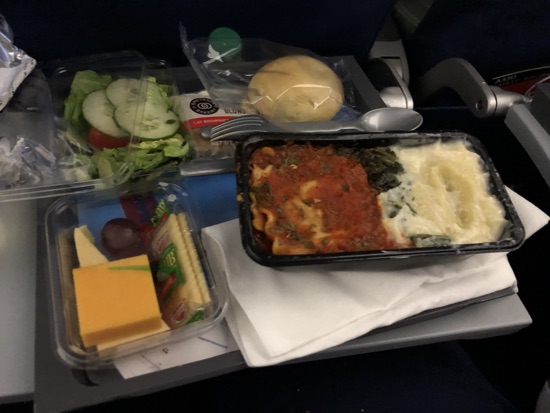 This was my meal. 2 types of ravioli. 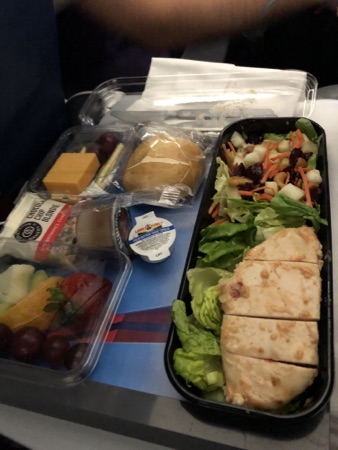 And molly has chicken salad.

The flight passed fairly quickly I thought. We had a meal. I read a book. (Unlikely Pilgrimage of Harold Fry) and watched Bohemian Rhapsody and by then there were only a few hours left.

We got a muffin and. Yogurt for breakfast.

All in all I was impressed with Delta and would fly with them again.

We landed just before 6 and made it through immigration and bag collection quite easily and then got the train to T5.

I was thinking this had gone very smoothly and we should have booked the 9:20 flight to Heathrow when. We walked into T5. It was utter chaos.
There were massive queues everywhere. I couldn’t check in on my phone and all the kiosks were cordoned off with huge queues.

We spotted two kiosks that weren’t behind a cordon and appeared to have a short queue but we were behind the family that couldn’t check In. They all had issues with either passports boy scanning or needing a visa etc.

Eventually they went off to find help and I attempted to check in. Fortunately it was very quick and we got our boarding passes printed out. We then went through the emptiest security I have ever seen. I can only assume no one could make it past bag drop to actually get to security.

We had a Dragonpass for the Premier plaza lounge for 3 hours. We had a 6 hour wait so we decided to go to Weatherspoons for breakfast first before we started the clock ticking.
In hindsight this was silly as the breakfast in the lounge looked lovely with eggs sausage bacon etc but I had thought it might just be pastries etc.

Anyway. We had sausage butties in Weatherspoons and then went to the Lounge. We were told on entering we could stay for 3 hours. She also asked if our flight was cancelled which didn’t bode well. This was the first we had heard of any issues.I had a quick Dibb and found out there were IT issues all over London. Causing problems pretty much everywhere.The lounge was pretty comfy. We each got a tall high backed chair that you could sort of sleep in. A recliner would have been perfect 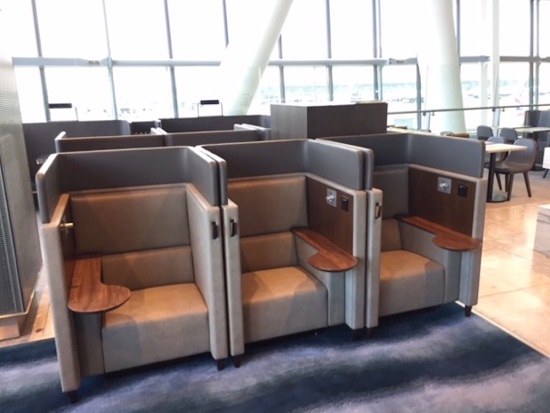 Molly and Phil managed to sleep quite well and I was quite relaxed checking out theDibb.

We could see flight after flight being cancelled due to It issues but there was no news on our flight so we kept our fingers crossed.

After about 3 1/2 hours I thought we’d better go as I didn’t want to get kicked out. This was a mistake. I don’t think we would have been and if we had we could have checked back in using 3 more vouchers.

Instead we went out into the gate area and started to play let’s refresh the BA App to try and find the gate.

The total lack of information was very frustrating. Our flight said it was departing on time until about 5 minutes before that time. Then a 45 minute delay. Then as it was obvious we weren’t leaving at 3:15 as we still had no gate it delayed again a short amount.
Frustrated I asked someone working on a different gate and she knew which gate we were at. So we walked around there. The Edinburgh flight was leaving first from the same gate so we went and got a meal deal.

For me the frustration wasn’t so much the delay. As the not knowing. If we knew we had 2 Hours I’d have gone back to Lounge. Instead it kept creeping forward by short amounts. Which meant we didn’t feel we could go anywhere. Get food / drink etc as they might make the announcement and we’d have to quickly get to the gate.

We did eventually go down to the boarding gate which was a bus stop and the final frustration was a lack of buses. So they checked everyone’s boarding card but had no buses to take us out to the plane.

Finally we were on the plane and on our way home.

It was 28 hours door to door. Too long if I’m honest. Part of that was our fault for leaving for the airport too early and a few hours were from BAs delay.

Would I do it again. If the price is right. Probably. But I think I’d get the train up from London Heathrow