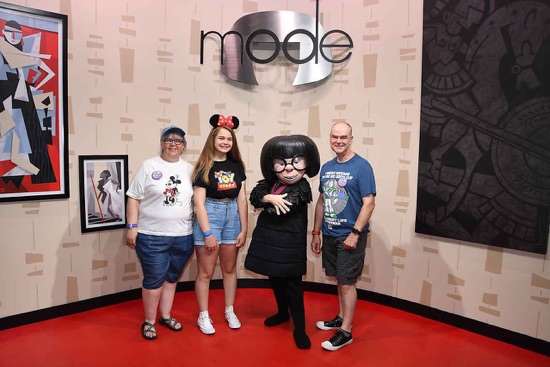 We started our day by walking to Hollywood Studios. It’s quite a pleasant walk along the river and from our room it makes no sense to walk back to the boat when we can walk to the park.

We started up in the incredibles area. We met Edna mode but the rest of the area was quiet. I feel like they could
Do more with this. We were a little early as none of the shows had started and we didn’t have any fastpasses so we didn’t know what to do next. We decided to go into Little Mermaid, which we haven’t done in years. We enjoyed this but when the doors opened to go out it was pouring. Totally torrential. 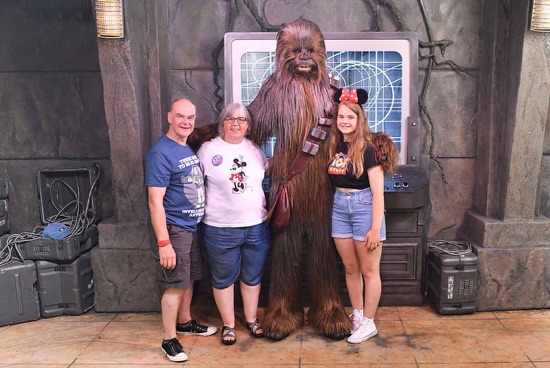 We were able to skip quickly between the exit of Little Mermaid and the Star Wars film area.

We watched the film and then met Chewbacca and BB8. 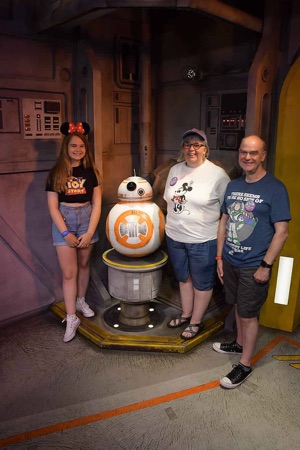 We aren’t the biggest Star Wars fans but it was good fun to wet them and it was dry!

We came out of this area and the rain had stopped. Just in time for our Toy Story Mania fastpass. We walked around there and went into the fastpass line.

Something odd was going on as we were directed out of a side door and had to walk around the outside of the building to get into the ride. 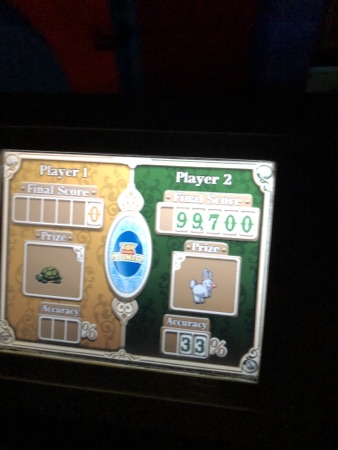 I thought I’d done quite well with 99,700 but of course molly and Phil has beaten me!

We were ready for a snack. So we grabbed a pretzel and a drink and sat back in the Incredibles zone. There was some sort of street party/ parade going on but I did feel like this could do so much more with this little area. 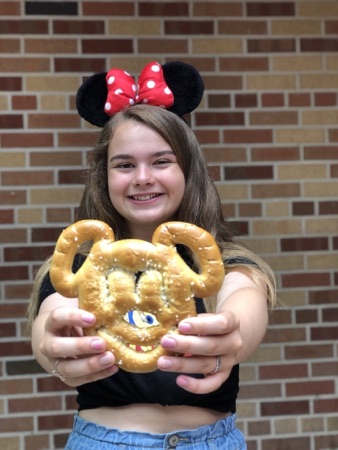 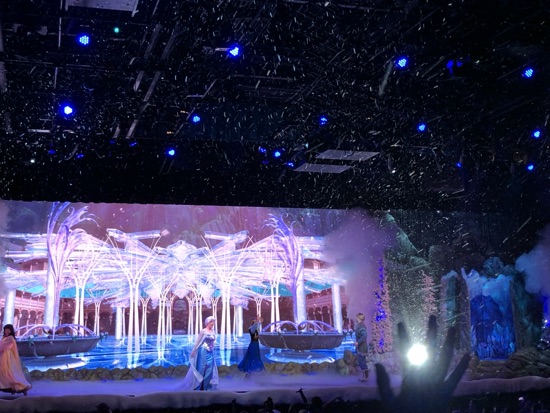 We decided Frozen was up next, so we went in the standby line and got seated no problem. This show is really all about the hosts who are hilarious. The actual Frozen content is for the kids but the hosts are definitely for the adults. They are very funny.

While we were sat, I made a reservation for Mama Melrose for lunch. 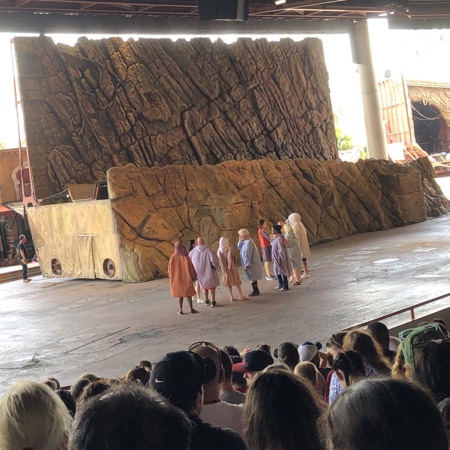 We went straight from the Frozen to Indiana Jones. Along with almost everyone else.

This was quite strange as the set wouldn’t move out of the way. So there was a hiatus while they tried to move it.

They did eventually get it moved and the show was able
to continue. 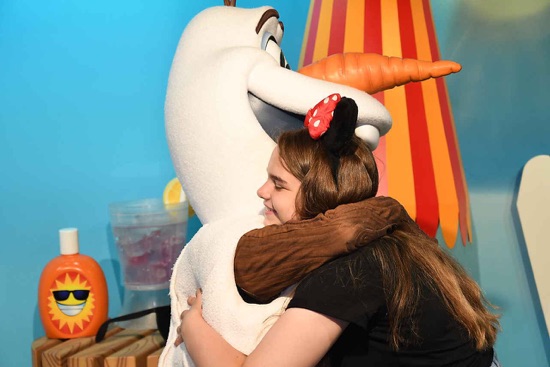 We went into meet Olaf after the show and then went around to lunch. 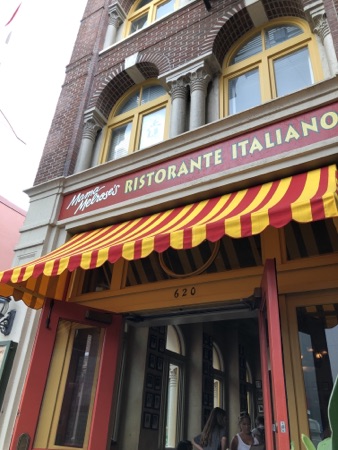 Molly and Phil had spaghetti and meatballs, and I had a flatbread. We’ve never eaten in here before and i don’t know why as it was really good. We enjoyed our meal and the atmosphere in the restaurant was good too.

After lunch it was raining again. We hid in the Muppets shop for a while and it slowed enough to leave. we saw lots of people going into StarWars land but unfortunately we didn’t have the magic pass to be allowed in so we just had to watch and wonder what they could see. As a small consolation we had a fastpass for Star Tours so we went on there. We had another new combination. I like the way the film changes each time so you get a different experience

With the fastpass options we seem to end up with a lot of fastpasses for this so it s good that it’s different each time. 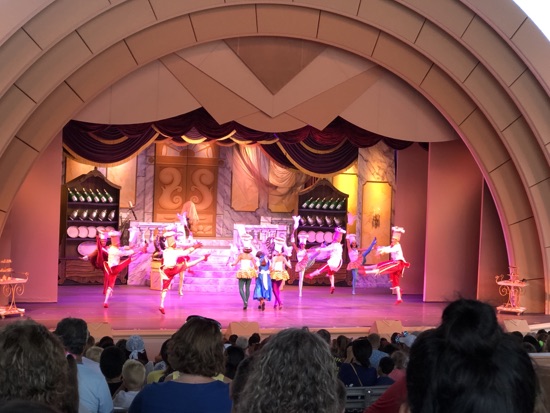 We had one last thing we wanted to do, which was see Beauty and the Beast. We had about 5 minutes before the show started so we raced over there and got in just in time.

After the show we headed out of the park and went for the boat. 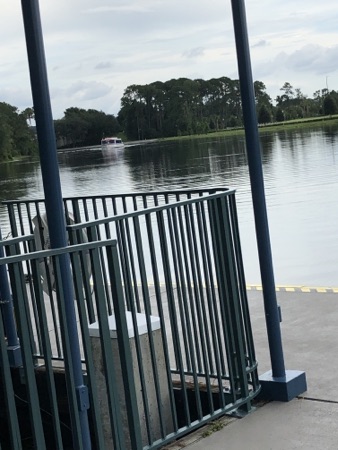 We were in the line for the boat and they counted everyone on and shut the gate right in front of us… we had a short wait for the next one and then we got the boat back . 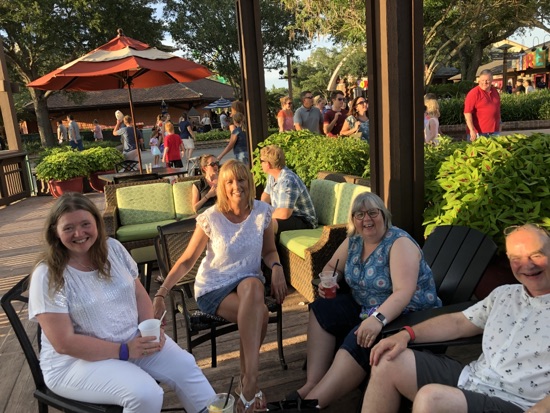 We had arranged to meet our skating friends at Disney Springs so we got the bus there and had a little look around the shops and then we met them at the Margarita bar. 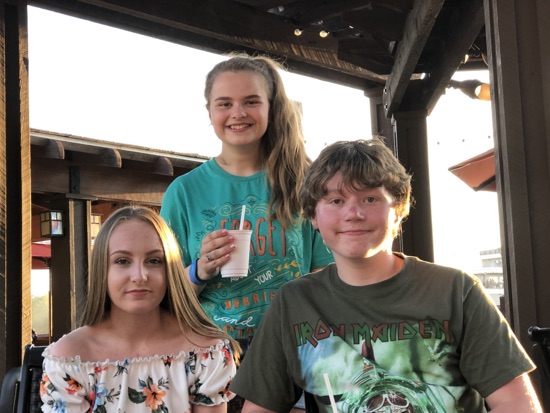 We had a good catch up and a few margaritas and eventually went out separate ways. We had a Landry card with $25 on it so we were headed to TRex. 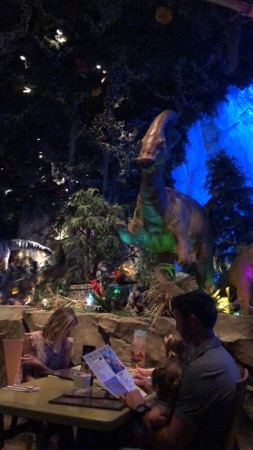 I’ve always seen a queue outside of here and wondered what it was like. Well It would best be described as OK. It is a huge restaurant and felt a lot like a school canteen with dinosaurs. My food was acceptable but not great. It was just all a bit blah. I certainly wouldn’t rush back but it wasn’t bad enough that I would complain about it. 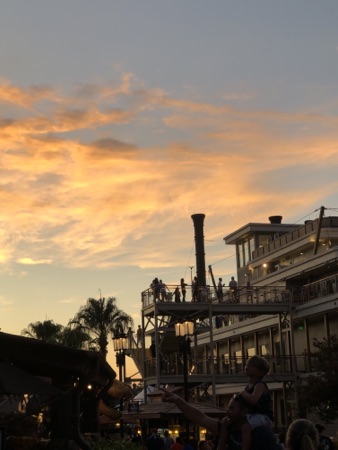 We came out of the restaurant and walked around Disney Springs for a while until we were quite lost. We ended up walking around in circles for ages until we found the bus stop.

We ran for the bus and caught it. And then we sat and sat and sat. Eventually the bus driver said it was the end of his shift but a new driver hadn’t arrived yet.

We did eventually get a driver and a ride home.